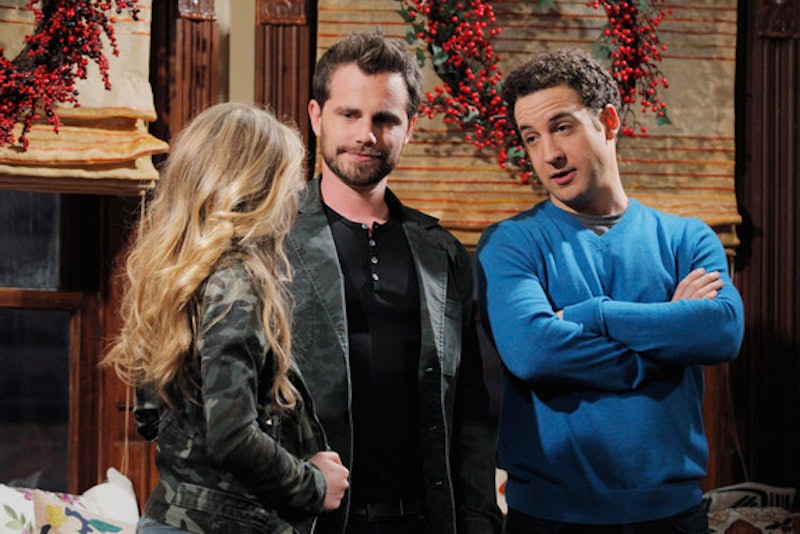 With its feminist voice and hard-hitting themes, Girl Meets World has proven to be a worthy continuation of the iconic sitcom Boy Meets World . Already in its third season, fans are loving Maya and Riley’s strong relationship values and the show’s timeless coming-of-age feel, which resonates with OG BMW lovers. In addition to familiar themes of young love and life from the Disney hit, viewers have been delightfully surprised to see familiar faces on the screen as well. Along with Ben Savage and Danielle Fishel, who star in the reboot, many of the original cast members have paid ode to the show by returning to cameo on Girl Meets World .

By now, you know that the show focuses on Cory and Topanga’s young daughter Riley in New York City, where the crew relocated to in the BMW finale. While Cory and Topanga started a life of their own all these years later, ride-or-die BFF Shawn Hunter (Rider Strong) appears in the show as well as his half-brother Jack (Matthew Lawrence) and his father’s spirit, Chet Hunter (Blake Clark). The Matthews clan, including Cory’s dad Alan (William Russ), mom Amy (Betsy Randle), and brother Eric (Will Friedle) return as well, and you better believe the voice of reason Mr. Feeny (William Daniels) is right there with ‘em.

Check out the guide below to see which episodes you can find your favorite characters in.

Mr. Feeny's cameo is brief, but that doesn't mean it isn't perfect. His voice-of-reason presence is so strong, it comes out of a poster to talk to Cory.

Harley has a good talk with Riley and her friends, admitting he was a bully (especially to Cory) and explaining why he's now so fond of Cory.

When Cory and Topanga host their first-ever family Christmas, you better believe mama and papa Matthews are there to celebrate.

The holidays also brought the reunion of the original three best friends, and now I'm crying.

When an episode starts with Uncle Shawn posted up on the living room couch, you know it'll be a good one.

At the end of the episode, Mr. Feeny pops up like spring flowers when Cory calls him to get that comfort we can always depend on him for.

Don't you know by now, guys? Even when he's not there, Mr. Feeny is always there.

Uncle Shawn is back and Topanga doesn't even try to get between his bromance with Cory. Naturally.

Cory's brother Eric reemerges as Plays-With-Squirrels, and we wouldn't have had it any other way.

With the help of Harley, Cory checks up on Maya and shares some of his life wisdom to help guide her in a time of need.

The girls ask Uncle Shawn for some advice, and you can just imagine how that plays out. This episode also shows Shawn's romantic side.

Shawn's deceased father comes back in Shawn's mind to give advice just when he needs him most.

Shawn and his ex reunite and catch up like old times, bonding over their deceased fathers.

Eric is back, and he finally got a haircut.

Paying it forward comes full circle in this episode, when Tommy, the orphan Eric took under his wing as a boy, returns as a political activist who ultimately helps Eric when he runs for senator of New York. Feels for days.

In the spirit of politics, Harley tells Cory that he wants to sit in on a class to learn about decisions made at the school, primarily dealing with budgets.

John Adams High's hunky teacher comes back for just one episode, and is obviously still the coolest.

Shawn's bro and mega babe Jack returns to reunite with BFF Eric, and the two are goofier than ever. Obviously.

In this episode, Stuart and Topanga bond over parenting problems.

In this episode, Minkus has a hard time when he loses his money and is forced to learn (and teach his son) about money's real value.

While Riley and the gang think about how they want to leave their mark, those who came before them aren't forgotten.

Even Harley is flattered when he learns about the impact he's made on the kids.

Riley and Maya venture off to see Uncle Shawn to yet again get some of his unmatched life advice.

This is a big episode for Shawn and his bae.

Which, obviously, Mr. Feeny is a part of.

While we're still in the midst of season 3, I have a feeling there many are more epic cameos to come. And, no matter how much time passes, like Mr. Feeny, BMW nostalgia will never get old.