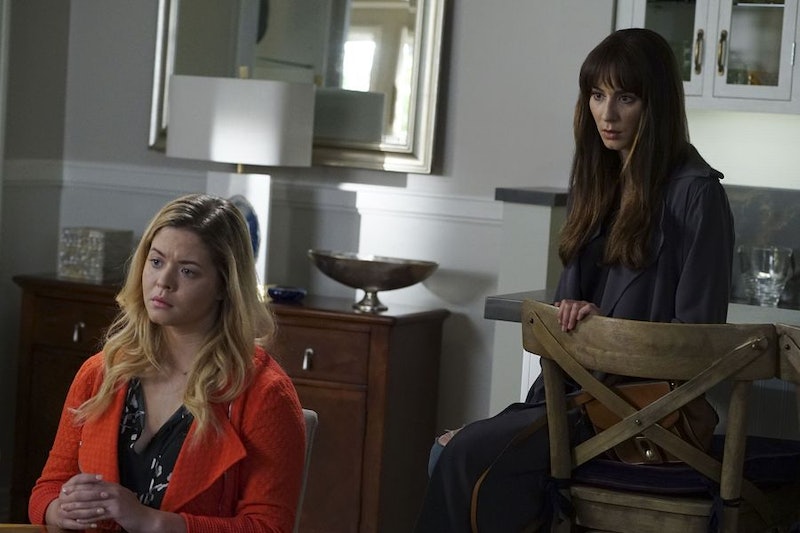 And the body count continues to just get higher and higher. It's only been a few weeks since Rollins was dead and buried (literally), but it looks like he isn't the only one who's potentially heading to the grave this season. In the final few moments of Tuesday night's episode "Wanted: Dead or Alive," we saw Sara Harvey's body lying in the bathtub in her room at the Radley Hotel. But is Sara Harvey really dead on Pretty Little Liars or is this just another trick like it was with Mona and countless others who have somehow come back from the dead? I suppose on this show there are no guarantees, but given the amount of blood that was on the bathtub, it's very possible that this death could be legit.

Granted, I've never been a huge fan of Sara Harvey's ever since she was initially introduced. But she seemed genuine when she told Emily earlier in the episode that she wanted to keep her safe and out of danger. And unfortunately, that allegiance may have come with her having to pay the ultimate price. The look on Sara's face when she opened her hotel door to leave showed that whoever was on the other side was definitely her killer and she was downright terrified of him or her.

Logic makes me initially want to point the finger at Jenna as the culprit since she seemed less than thrilled at how Sara kept almost slipping up about something right in front of Emily. But there's also a fairly good chance that it was the other mystery person that Sara tried to warn Emily about. Maybe it was Noel since he had just joined their little group and was nowhere to be found this week. Or maybe it's someone that even he and Jenna are terrified of.

I have no clue who that could be, but if Sara's alleged death is any indication, this person is dangerous and could very well be the worst villain the Liars have ever encountered. And that's really saying something.

More like this
Lizzo Proved She’s Team Jeremiah During Her ‘The Summer I Turned Pretty’ Review
By Grace Wehniainen
Natalia Dyer Opened Up About Steve & Nancy’s “Lovely” ‘Stranger Things’ 4 Dynamic
By Grace Wehniainen
What’s New On Netflix: Lana Condor’s Ghostly Comedy & A Sexy Reality Series
By Arya Roshanian
Jesse Tyler Ferguson Had A Funny Run-In With A Fellow ‘Modern Family’ Alum
By Grace Wehniainen
Get Even More From Bustle — Sign Up For The Newsletter