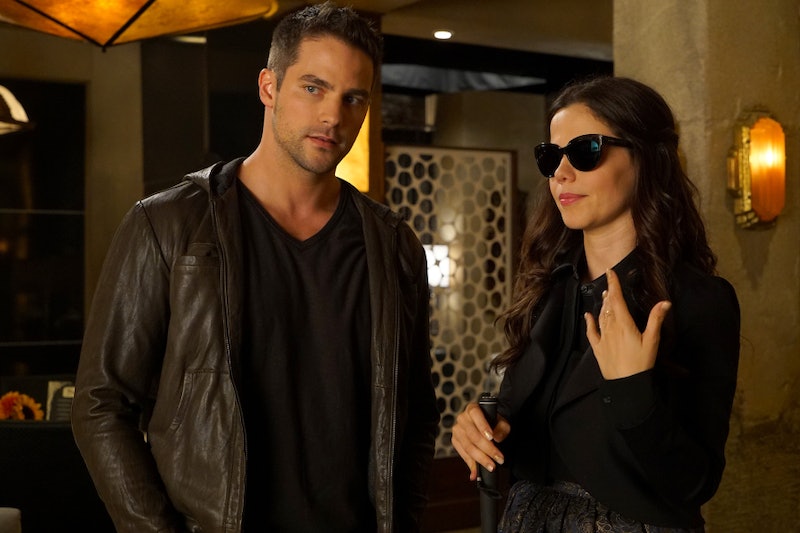 Just in case your faith in the Rosewood police force wasn't already severely shaken, this week's episode of Pretty Little Liars introduced a fake cop mask being worn by someone who attacked Alison and might've killed her if the sirens from the actual police hadn't scared them off. But as for who was wearing the cop mask, that unfortunately remains to be seen. During their struggle, Alison was able to tear some of the mask away from the person's face, but was unable to catch a glimpse of his or her true identity. That being said, I'm willing to bet that the culprit was actually Noel.

I mean, think about it. He just arrived in town and yet we didn't see him at all throughout this entire episode. Was he hungover from his little drinking session with Jenna and Sara? I think not. Odds are, he was busy appearing on screen wearing a different face... a cop face, for instance. I've long suspected that Noel could be the mysterious A.D. we've been searching for and this latest attack only helps to confirm my suspicions, especially now that Spencer and Hanna have dug up Rollins' body, proving that it isn't him who's been making those phone calls to the burner phone.

Whoever is tormenting the Liars knows what they did and seems hellbent on making them pay for their crimes. They probably used a voice changer to make them sound like Rollins instead of using their actual voice. That means it could definitely be Noel. Alison's attacker certainly had a male frame that could fit Noel's body shape. And, if you noticed, he was about to use a cattle prod on her — perhaps the very same one that was used on Hanna not too long ago, which means this isn't someone new to the "A" game. This is someone who's been apart of this story from the beginning of the season. Noel may have appeared to return a few weeks ago, but maybe he's been lurking around Rosewood this entire time.