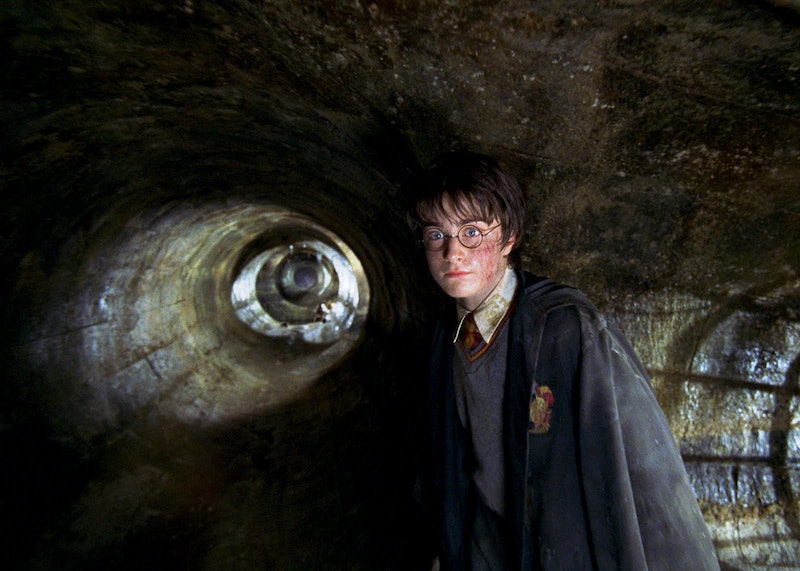 Whether you're a lifelong fan of the franchise, or a newly converted one who's only seen the movies and never read the brilliant novels, we can all agree that Harry Potter films are about as good as book-to-movie adaptations get. There's no way the films could ever please all the fans, but there are bits and pieces in each that delight even the most skeptic, diehard reader. However, there's one installment in the franchise that's definitely the weakest of the Harry Potter films, and that's The Chamber of Secrets. (Though it should be noted that even the worst Harry Potter film isn't a bad Harry Potter film.)

There are aspects to the Chamber of Secrets that don't live up to its one preceder and six succeeders, but, as a stand alone film, it's not terrible. It's just not the best. (Or in the top seven, you know?) Chris Columbus' second Harry Potter film was unfortunately a small, but noticeable, backpedal in what would grow to become one of the most influential and ambitious franchises of our generation.

Though, not all of it falls at the hands of the filmmakers. As far as source material goes, there's reason to believe that Chamber of Secrets is by no means the strongest book in the series either, so, even though the adaptation might have fallen flat in some areas, being a nascent film franchise, with young actors (see: Ron's constant facial over-acting), and a devout film base to please, it did the best it could.

First, let's get into the length. While it feels wrong to complain that a Harry Potter film is too long, Chamber of Secrets was cumbersome to watch. Perhaps it was the film's running time (161 minutes), mixed with its vehement adherence to the novel, that made things feel clunky and overdone. Should it have been split into two parts? Should the transitions between subplots and story lines been made more digestible? Those things might have helped, but a majority of issues could have been fixed if the filmmakers had decided to show, not tell. Most of the film manages to generate suspense for the overarching mystery, but too much relies on explanations and "ah-ha!" moments and not enough on succinct visuals.

Then, there's the villain. Harry Potter has always been filled to the brim with nefarious characters and beings. They range from intriguing to downright terrifying. But the villain in Chamber of Secrets was a let down. A diary? Oh, sorry. A sentient diary that turns into Tom Riddle's ghost. In retrospect, now that we're fully aware of Voldemort's power, anything related to Tom feels insidious, but, at the time, the unveiling of the villain was anticlimactic.

We can't forget about Dobby. No offense to the Dobby lovers out there, but even you have to admit that Dobby is either the worst Harry Potter character or the worst Harry Potter character. Up to you. The way he incessantly bangs his head against everything is enough to drive any viewer up a wall. The visual handling of Dobby works just fine — good job early 2000s CGI — but, as far as adapting the character to the screen, the filmmakers could have tried to make Dobby's voice, motions, and overall demeanor more palatable. In a film that's 161 minutes long, why, oh why, does he keep showing up?

And speaking of characters that get under your skin, Gilderoy Lockhart anyone? The pompous, conceited character played by Kenneth Branagh isn't a threat (he was morally ambiguous at worst), but he's a headache that, like Dobby, just won't go away. Even the brilliant and independent Hermione (Hermione, why?) falls privy to his spell, so to speak. As a viewer, its hard to watch these characters grace the screen for extended amounts of time, even if they are harmless. In fact, because they are harmless. At least with characters like Dolores Umbridge, a take down is inevitable.

In terms of tone, Chamber of Secrets, doesn't know where to position itself. Like its main characters, it's stuck between childhood innocence and the impending darkness of adulthood. The film has a PG rating, which by no means points to it being lesser than its PG-13 counterparts based on that alone. But there's something to be said about the ways in which the later Harry Potter films handle darker elements. As in, those later films (and books) brought a level of humanity and fear that we never knew was missing from the earlier work until it showed up later on. Chamber of Secrets could have benefited from crushing its own naïveté.

Add in a Quidditch match that feels like it's never going to end, and a third act that pretty much abandons any semblance of plot for a bunch of strung together action, and you have a film that struggles to keep up with its own pacing. Sure, it's still visually sound. The labyrinthine halls of Hogwarts, and the amount of detail that goes into any film from the series, will always be enticing to watch. It's just that, when you compare Chamber of Secrets to all the other Harry Potter films, you'll realize that there's something huge missing. Don't make me say it...