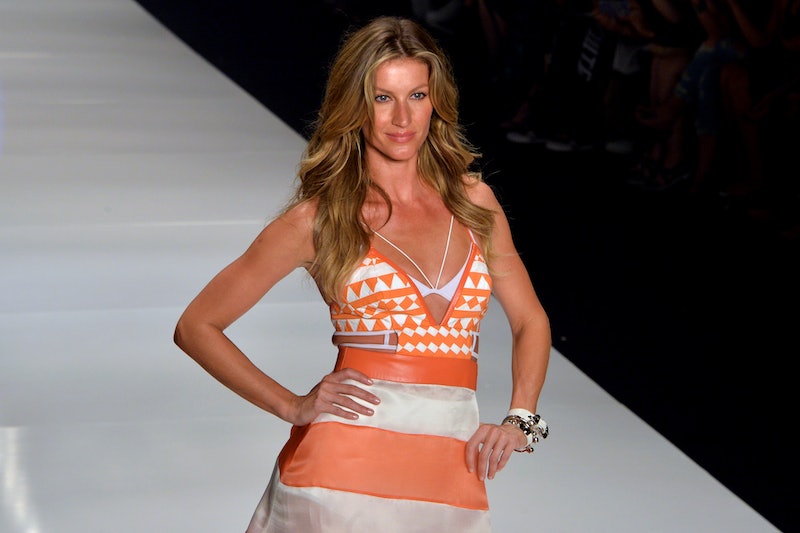 When your country is home to one of the most famous supermodels in the world, you should brag about it. And that's what Brazil is doing with Gisele Bundchen being in the Rio Olympics opening ceremony. The host city for the the 2016 Summer Olympics, Rio de Janeiro, will have the opportunity to showcase the history and culture of Brazil during the artistic program of the opening ceremony. Like London before with Danny Boyle, Rio recruited the City of God and The Constant Gardener director Fernando Meirelles to helm the opening ceremony, which airs in the U.S. on Friday, Aug. 5 at 7:30 p.m. ET. While Bündchen won't be a part of the parade of nations that focuses on the athletes, she will be in the artistic program on Aug. 5, so what time is Bundchen in the opening ceremony?

Just like the time of Bündchen's appearance is hard to pinpoint, so is what she is exactly going to be doing during the opening ceremony. The Daily Mail reported that, according to spectators who attended the opening ceremony dress rehearsal at Rio's Maracanã Stadium, Bündchen walked down a catwalk to the Brazilian song "The Girl From Ipanema" and then was mugged as part of the act with a race to catch the perpetuator ensuing throughout the stadium.

Controversy obviously surrounded the report and The Washington Post reported on Aug. 2 that the skit in question was cut and Meirelles told the newspaper that this was all a "tremendous misunderstanding" in the first place, as the skit actually involved a food vendor asking the model for a photo and being chased by security guards. "Imagine us doing a scene like that in the opening," Meirelles wrote in an email to the newspaper. "I'm not that clueless." He also wrote, "It was a gag that was not funny so we cut it. ... There was nothing that looked like a robbery in the scene except two security guards chasing after a vendor. They are three professional clowns."

While that particular section of Bündchen's opening ceremony appearance was cut, she will still be in the Olympic ceremony as the model posted on Instagram during the morning of Aug. 5 that she was in Rio.

The entire opening ceremony, which includes not only the artistic event and the parade of nations, but also the presentations of the Olympic flag, anthem, oath, and flame, is scheduled to last approximately four hours. And while the artistic segment is one part of the overall ceremony, in years past, it's usually the most memorable — like when Daniel Craig's James Bond escorted Queen Elizabeth II to the London Olympics opening ceremony. Knowing that, whatever Bündchen does is sure to be epic. Just make sure you're watching the opening ceremony by 8 p.m. so you don't miss the model during the celebration of Brazilian culture. If you tune in when the parade of nations has already started, you'll have missed her.