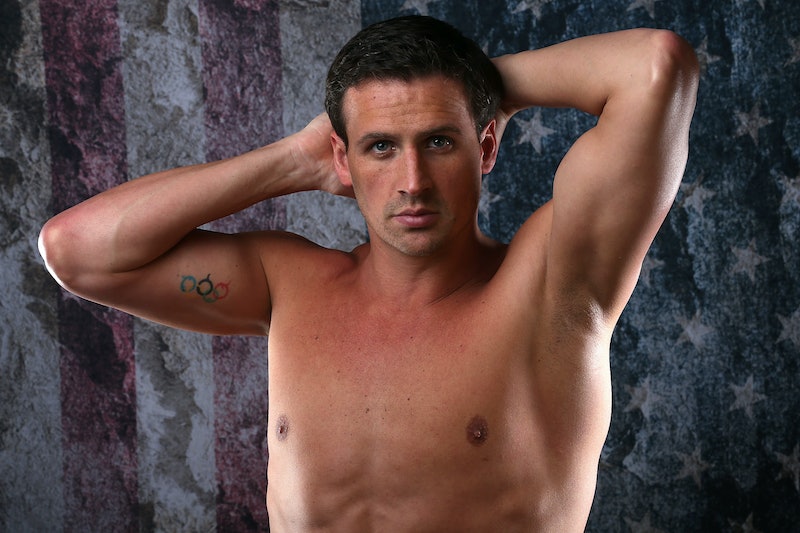 It's the most wonderful time of every four years: The Olympic Games are upon us, and the 2016 Opening Ceremony kicks off in Rio on Friday, Aug. 5. While all eyes are on Most Decorated Olympian of All-Time Michael Phelps carrying the flag (an honor, TBH), my eyes frantically scanned the room to see if my Olympic boyfriend Ryan Lochte is at the opening ceremony. The swimmer isn't exactly hard to miss, in part because he is deliciously handsome and a standout even on a team saturated with well-toned, unfairly good-looking guys, but also because the guy just dyed his hair a silvery blue (hopefully not a sign for medals to come). Since Phelps will be the one to bear the flag for all of #TeamUSA at the opening ceremony, it stands to reason that his Men's Swimming teammates will be there to cheer him on — and be cheered on themselves.

Fortunately, Lochte was in attendance for everyone to admire, and his new hair looked even better up close than it did in the Instagram post he debuted it in. If you needed any more reasons to cheer for Team USA, let me ask you: why? Look at this man and tell me you're not feeling patriotic.

Lochte, who just turned 32 on Wednesday and already has 11 Olympic gold medals under his belt, will once again be facing off against Phelps during the games as the athletes compete in the 200 IM race on Wednesday, Aug. 10. While Phelps is the defending champ of the event (he won gold in 2012; Lochte won silver) my man Lochte is no slouch — the two have been neck and neck throughout their entire careers, and Lochte even set the world record for the 200 IM at the World Championships in 2011. Hopefully, the groin injury that is currently plaguing the swimmer won't get in his way of winning some more Olympic gold this year.

Whatever happens during the Games, it's clear that Lochte will spend at least part of his time in Rio documenting the Olympics on social media (heck jeah!) The swimmer is a frequent fixture on Instagram, Twitter, and Snapchat, and I can't be the only one ready AF for some behind-the-scenes Olympic snaps. Plus, those icy blue locks are apparently his version of the American flag grill that he so famously sported in 2012 — unless that baby makes a comeback this time around, too.

So, in addition to those muscles and that face, fans can expect to watch a platinum-haired Ryan Lochte fly by in the water this Olympics — and at the Opening Ceremony as well.