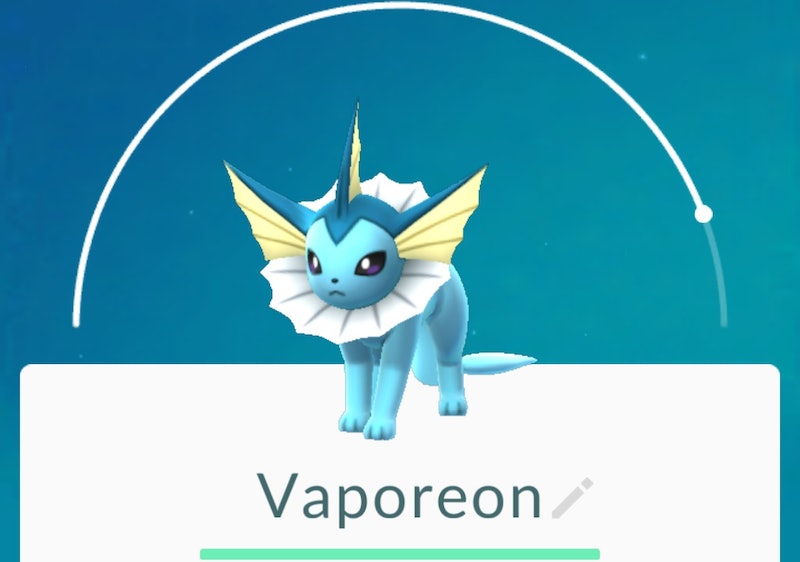 In what is perhaps an unprecedented burst of popularity, Eevees have become the Pokemon to catch in "Pokemon Go" — but then again, given the neat little evolution hack Eevees have in the game, maybe it's not that surprising that everyone wants them. So, if you were wondering how to evolve an Eevee into a Vaporeon, the good news is that it's easily done. Every trick helps when you're trying to catch 'em all, right?

It seems incredible that it's been less than a month since "Pokemon Go" launched. The game has been astronomically popular as Millennials take the opportunity to live out their childhood fantasies of roaming around catching wild Pokemon and training to be the very best (like no one ever was). And with so many people playing, it pays to use every advantage you can — so being able to predict whether an Eevee will evolve into a Vaporeon certainly comes in handy.

So how do you manage it?

Eevee's evolution can be controlled by what nickname you give it. Like all Pokemon in the game, you can customize an Eevee's name once you've caught one, changing it from the default species name to whatever you want. And if you change an Eevee's name to "Rainer," then instead of evolving at random once it's eaten enough Eevee candy, the Eevee will become a Vaporeon. The trick was confirmed by Niantic CEO John Hanke at San Diego Comic-Con as an Easter egg built into the game, so hats off to whoever managed to figure it out before then.

(Just make sure that you're not letting autocorrect interfere with your newly christened Eevee.)

You can see how easy it is here. Once you've gotten to the profile screen of the Pokemon you want to evolve, just tap the default name "Eevee."

Then type in the name "Rainer" (don't use the quotation marks) and tap "OK."

And you're all ready to go!

Once your Eevee has eaten enough Eevee candy and is ready to evolve, it will turn into Vaporeon, thanks to its new nickname:

That's not the only fun hack to have emerged from "Pokemon Go," either — not by a long shot. You can find more tricks and shortcuts here, here, here, and here. Just to make sure you're taking your "Pokemon Go" skills as far as possible.

More like this
24 Funny Valentine’s Day Captions To Use No Matter Your Relationship Status
By Jessica Booth
11 Super Bowl Instagram Captions To Use On Game Day — Even If You Don’t Like Sports
By Alexis Morillo
Ashamed Of Your Screen Time Stats? Here's How To Change That
By Alexis Morillo
Flip Phones Are Gen Z's Favorite New Nightlife Accessory
By Maria Santa Poggi
Get Even More From Bustle — Sign Up For The Newsletter
From hair trends to relationship advice, our daily newsletter has everything you need to sound like a person who’s on TikTok, even if you aren’t.