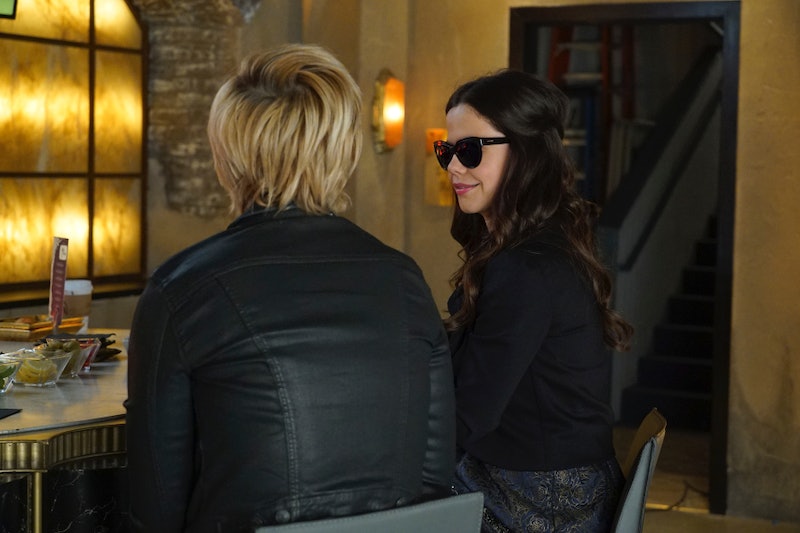 The walking symbol of how much guilt the Liars possess is back in town, and with her comes a whole slew of new questions. Jenna has returned to Rosewood after a long absence, and she didn't waste any time immediately striking up a friendship with Sara, the one person who might understand what it's like to be physically injured at the hands of the Liars. (Well, err, Shana would probably have been on that list, too, but we all know what happened there...) Not surprisingly, the Liars totally don't trust Jenna, and, as per usual, have no idea why she would be sticking around. However, Emily decided to play by a new rule book in Tuesday's PLL episode "Wanted: Dead Or Alive" and flat-out ask Jenna why she's in town — and her answer just opened up a huge PLL plot hole involving Jenna and Charlotte. Or did it?

Emily's confrontation with Jenna seemed to actually yield some results. Jenna told Emily the real deal between her and the man known as Dr. Rollins, and it definitely wasn't what anyone expected. According to Jenna, she was great friends with Charlotte, and even helped Dr. Rollins get a job at Welby to be with Charlotte. Given that Charlotte, Dr. Rollins, and Jenna are all shady as ever, it's not surprising that they would be friends — what's surprising is that Jenna was supposedly terrified of Charlotte. Back when Charlotte was pretending to be Cece Drake, Shana told Emily that Jenna was afraid of her. Charlotte even tried to drown Jenna, something that PLL showrunner I. Marlene King confirmed in an interview with Entertainment Weekly shortly after the Big A reveal. But, according to Jenna, these two have been great pals since Mona was in Radley with Charlotte — so how does that work?

Fortunately, unlike Toby's age in his Ali flashback, this seems like it's one plot hole that will be cleared up with answers, not more questions. The PLL spoiler account That's What -A Said addressed the issue of Jenna and Charlotte's friendship head on when asked by a Twitter user about the mix up, which means we'll likely get a real answer about whether Jenna ever was truly scared of Charlotte:

Could there be a logical explanation for why Charlotte would have tried to drown her friend? There's always the chance that Charlotte went after Jenna after being manipulated by someone else, or that she went after Jenna thinking it was a different person. (Maybe, say, Spencer?) Whatever really happened between Charlotte and Jenna, I'm dying to know why these former enemies magically became BFFs.