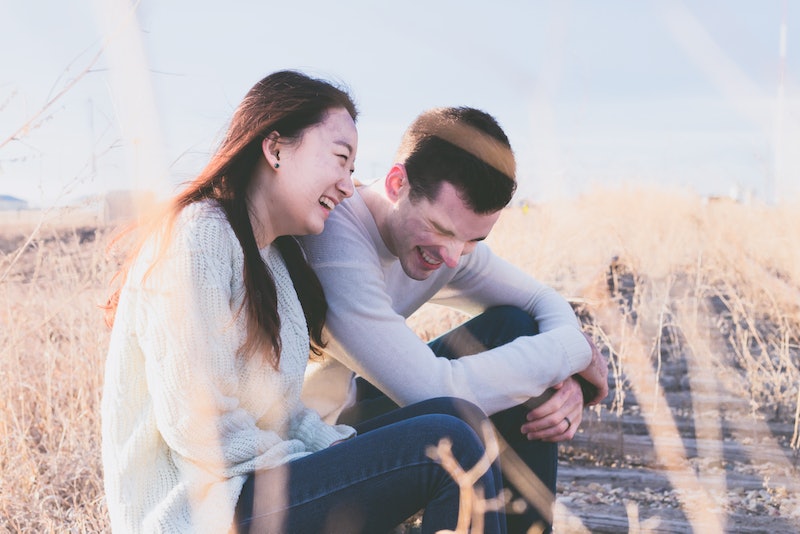 As a woman who has been happily married for many, many years and also a woman who has identified as a feminist for her entire adult life, I understand why the idea of marriage as a feminist institution may be hard for some people to grasp. In fact, I too struggled with what I might have to compromise over after I walked down the aisle and said "I do." Having said that, my own experience has taught me that there are many marriage traditions that are unexpectedly feminist. While historically marriage has reinforced imbalanced gender tropes and catered to a patriarchy that treated women like commodities, wives and husbands today are finding new ways every day to make time-honored marriage traditions more modern and, more importantly, more representative of the equal rights we enjoy. Some of those traditions are even inherently feminist — which, admittedly, is somewhat astonishing.

It's undoubtedly true that there are marriages in existence that are decidedly anti-feminist. But that doesn't mean that feminists can't support marriage at all, though. At its very core, feminism is a movement devoted to ending inequality based on arbitrary markers like gender. It has nothing to do with "hating men" — a myth often perpetuated by, you guessed it, card-carrying members of the patriarchy. Rather, feminism is simply against inequalities that marginalize women (and pretty much anyone who's not a straight, cisgender, white man) and put us at a disadvantage.

Some people may argue marriage still does those things, but I counter that by citing a few marriage traditions that are more feminist than you may realize.

Sitting Down to Dinner Together

When you're dating someone, this isn't really a big deal — when you do eat dinner together, it's often at a restaurant with a third party cooking the meal, or it's something you make together as a fun activity. But when you get married, there becomes an emphasis on sitting down to eat dinner together in the evenings. In the past, this would certainly not have made the cut of feminist traditions, seeing as a wife was expected to have a delicious meal ready and waiting on the table when her husband came home from work. Today, this marriage tradition has evolved to include a more equal division of labor. Hell, if you ask my husband, he'd probably say the labor skewed more in his direction (What? I'd use the oven for storage if he'd let me). This is progress, people! Not only is the very act of preparing dinner more equal now, but the act of sitting down together — of choosing to be in each other's company out of pleasure and not obligation — speaks to the greater autonomy modern wives have.

Talking About Your Feelings

When well-meaning friends and family doled out advice before my big day, the tip my husband and I got far more than any other was, "Communication is the key." With marriage comes great responsibility, and by responsibility, I mean a whole bunch of talking. Sometimes that talking even parlays into arguing. You know why that's a good thing (yes, even arguing)? Because it means everyone is entitled to their own thoughts, feelings, and opinions. In the past, wives were directed to adhere to a narrowly defined role as a housekeeper and baby maker. We were to always defer to our husband's opinions and never challenge them. Alternately, men who expressed emotion were stigmatized for being too "feminine." So the marriage tradition of talking to each other still persists, but today we both actually have something to talk about. And besides, open, honest, and kind communication — even when you disagree — is essential for any relationship, but especially a feminist one.

Ahh, sex. My favorite marriage tradition! It's kind of the whole point of getting hitched, right? OK, so there's also the whole eternal love business, but you get my gist — from the beginning of marriage as an institution, sex has been one of the primary motivators, whether it's for procreation or pleasure (or both) Therefore sex is one of the most abiding marriage customs there is. Here's the kicker, though: we decide. We choose when we want to have sex and how much. We can even talk about it, which was a big no-no back in the '50s and other less progressive decades. Institutionally, marriage mandated that women first and foremost respect and meet the sexual needs of their husbands. Feminist? Not so much. Happily, things shifted somewhere along the way and wives today get to call the, ahem, shots — not to mention the fact that LGBTQ relationships are no longer erased quite as much. (There's still a long way to go for LGBTQ rights, of course, but we're getting there, especially with the legalization of same-sex marriage.)

If you're anything like me, you're a big fan of gifts in general so this is good news. Hear me out, though, because there's a reason this one falls on the feminism spectrum: Looking back at the history of marriage, women didn't typically give gifts to their husbands. Actually, in some cultures, they were part of the gift — parents of the bride were required to give a payment along with the bride's hand in marriage to the bridegroom as part of a dowry. Then, because wives were expected to stay home while their husbands were the sole breadwinners, women didn't have the luxury of making purchases without running it by their husbands first. (Indeed, women didn't legally exist after getting married, thanks to coverture laws, so they literally couldn't make purchases.)

Now, though? Coverture laws are no more. Women can work, they can own things, and they can buy things — and because of this, simply being able to exchange gifts every year is feminist. Hey, you might not think buying wood for your fifth anniversary is that exciting, but just think of it like this: in some ways, it's a win for woman kind.