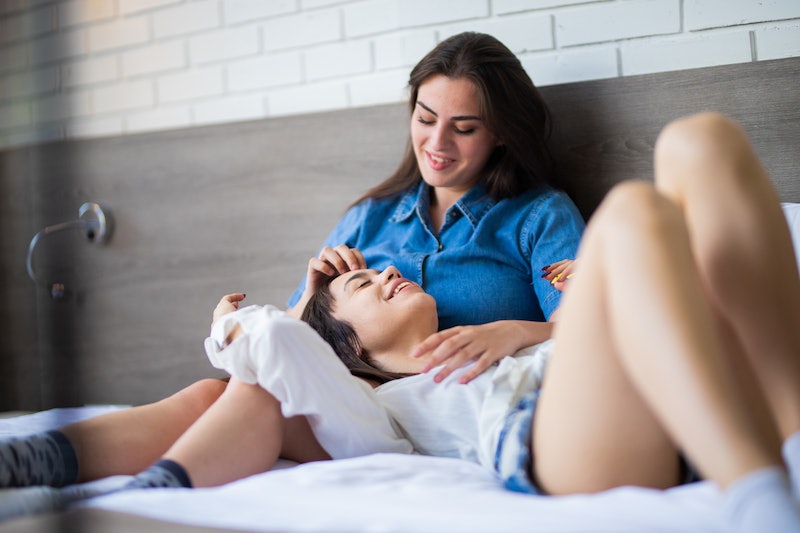 As a 26-year-old whose longest relationship to date lasted just under four years, I would never claim to be an expert on relationships. That said, I think we can all agree that one of the bigger struggles that comes with maintaining a healthy, happy, longterm, romantic relationship is worrying too much about whether or not you’re "doing it right". At least, I know that's been a struggle for me in the past. Here’s the thing, though: Everyone’s different. No two romantic relationships are going to function in exactly the same way, and there’s nothing wrong with that. So as long as you and your partner are happy and healthy, chances are, all things that might be considered “unconventional” in your relationship are actually totally OK — awesome, even.

If you and your partner practice consensual non-monogamy, and it’s working for you both, that’s something you should be proud of. If you and your partner are waiting to have sex until marriage, because it’s something you both feel compelled to do, that’s also awesome. If you live with your partner, never want live with your partner, or you think you might want to share a home with them someday, that’s all good, too. Whatever you need to do to have a great relationship with your lover, do that — no matter how “weird” it may seem. You don’t need anyone’s approval or permission to be unconventional in your relationships, because they’re yours.

On that note, here are five “unconventional” things that are totally OK in relationships.

Maybe you (like myself) enjoy being monogamous in your relationships and don't see that fact changing anytime soon. If that's the case, awesome! If, however, you or someone you know practices polyamory consensual non-monogamy, that's also more than OK. In fact, while still considered "unconventional," consensual non-monogamy has become increasingly more mainstream in recent years. This is largely because psychologists find the whole poly community to be fascinating, but it's also simply because more and more non-monogamous people have been coming out and speaking up about how they live, love, and make love differently than monogamous folks do.

Moreover, although consensual non-monogamy would be totally fine no matter how many (or how few) people practiced it, the fact is, millions of Americans are openly non-monogamous these days. Back in 2013, LiveScience reported that up to five percent of American couples practice consensual non-monogamy in some form — whether that means they're in several relationships at once, they invite a third party to get down with them and their SO once in a while, or they engage in some other form of consensually non-monogamous activity. So, basically, being non-monogamous isn't really that big of a deal — as long as everyone involved feels happy and respected.

2. Waiting Until Marriage To Have Penetrative Sex

Just like no one should be slut-shamed for having lots of sex or practicing consensual non-monogamy, no one should be shamed or ridiculed for abstaining from penetrative sex until their wedding night, either. Though it's considered antiquated in mainstream, Western culture to wait until you're married to have sex these days, a surprising number of Millenials still think holding out until the big day is a good idea. As Women's Health reported back in 2014, about 51 percent of people, and 47 percent of Millenials, think waiting to have sex until marriage is ideal. So, if you're waiting to have sex until you get married, don't let anyone make you feel like a weirdo about it. Because "your body, your rules" applies to everyone — not just us sexually active folks.

If you want to get married, you should get married. With enough love and respect, I'm sure marriage can be a wonderful thing. On top of that, some studies even suggest marriage comes with physical health benefits that living together simply can't provide. (Plus, you know, tax breaks and stuff.) If, however, you don't see marriage as meaningful to you personally, and your partner feels the same way, then you shouldn't allow societal pressures to push you into getting hitched.

Since the late 1960s, marriage rates have dropped from 70 to 50 percent among U.S. citizens aged 18 and up. Overall, people are less religious now than they were back then, and more women are an active part of the workforce than ever, so marriage isn't quite as big of deal to the majority as it used to be. More and more couples are choosing to either live together before marriage, or they're choosing to skip marriage altogether and opting for long-term cohabitation instead. So if you're not sure marriage is right for you, that's totally fine — great, even.

Although asexuality has been gaining more visibility recently, our culture still has a difficult time understanding how someone can have a meaningful, satisfying relationship free (or mostly free) of sex or sexual attraction. But it's important to remember that, for some people, sex and romance aren't inherently linked — and that's OK.

Of course, like any other sexual orientation, asexuality exists on a spectrum — so just because a person is asexual doesn't mean they never feel any sort of sexual desire. Additionally, asexuals don't only date other asexuals, so just because a person doesn't experience sexual attraction doesn't mean they won't ever have sex with their partners. The important thing to remember here, is that love and sex are distinct. So while it's uncommon for couples to be happy in sexless (or less sexually active) relationships, that's not the case for everyone, and that's OK. There's nothing inherently "off" about being in a sexless relationship — nor does being in one automatically mean both parties are asexual.

5. Choosing To Live Apart — No Matter How Long You're Together

For many people, living together is an inevitable step in any successful, long-term relationship — but it doesn't have to be. As Psychology Today reported back in 2014, a growing number of longterm couples in nations such as the U.S., Britain, Canada, and Sweden have rebelled against the whole cohabitation bit entirely, and are choosing to "live apart together" (LAT) instead.

Personally, I love living alone, so this set up sounds pretty great to me at this point in my life. My personal feelings aside, though, being part of an LAT couple comes with some very real advantages, according to Psychology Today. Couples who choose to live apart have to make time to see each other, so their relationships are less likely to become monotonous. Plus, when you live apart, no one ends up staying in the relationship just because breaking up would mean finding a new place and going through the painful process of dividing up all your belongings.

Living separately from your partner — no matter how long the two of you have been together — isn't weird at all. Actually, depending on you and your partner's personalities, living apart together could be the perfect set up for you two. So don't feel like you have to move in with your partner just because not living together after a certain point is considered "unconventional."