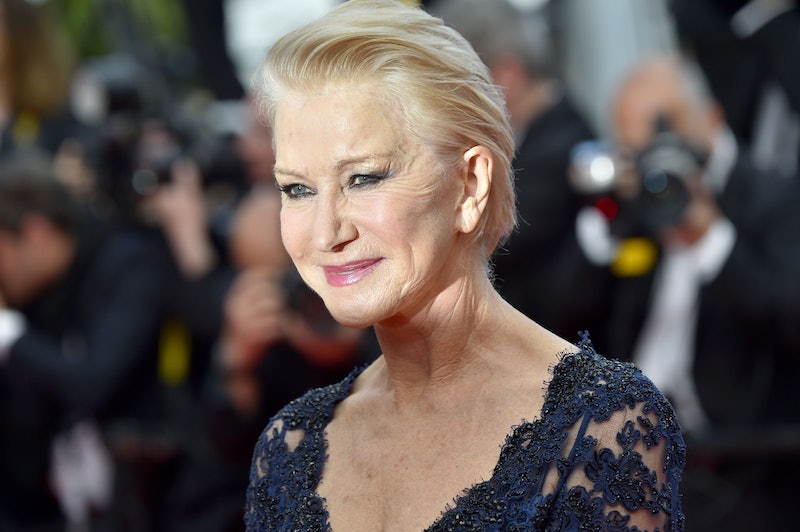 If you are still not sure if Helen Mirren appearing in Fast 8 is the coolest casting coup ever or the most random thing to happen in movie history, then you need to see the first Fast 8 photo featuring Mirren and Vin Diesel. The actress joining the Fast and Furious franchise definitely falls into the cool category. In the first photo, her mystery character is looking cozy with Dom (Diesel) as he whispers something in her ear. My curiosity senses are tingling, guys. Remember, Mirren asked to be in Fast 8 .

The woman loves cars so much she once appeared in an episode of Top Gear, where she giddily made a lap around the racetrack. While Mirren's role in Fast 8 is going to be small, you can bet everyone involved will make the most out of her time onscreen. The movie already has a female villain in Charlize Theron, so Mirren truly could be playing anyone in this thing.

The new still shot from the film does its best not to give anything away, but it does offer up a few clues about what kind of character the actress could be playing. It also hints at an interesting relationship between Mirren's character and Dom. The first thing I noticed is how well dressed Mirren's character is compared to Dom. While Dom is rocking his standard, sleeveless car enthusiast style, her character looks quite affluent. Her clothes are chic, and her jewelry game is on point. Clearly, her character comes from money.

Once you get past her clothes, take a look at Mirren's expression. Dom is whispering something to her, but she looks thoughtful instead of threatened. These two could very well be on the same side, and even have some sort of history. I love the idea that Mirren's character could in someway be responsible for Dom's love of racing. Maybe he once worked for her, or the two had some sort of relationship. Come on, Diesel/Mirren is infinitely 'shippable.

The setting also hints at a special meet up. The locale is either a restaurant or club from the look of things. Could Mirren's character be the owner? Dom may be asking for her help in finding out information about Theron and her henchmen. Mirren could rock the "all-knowing club owner in a world of street racing" role.

No matter what their relationship is, these two characters look very much like co-conspirators here, and just the idea of these two teaming up makes me a thousand times more excited for Fast 8. While I wish Mirren had a major role, it is beyond cool that the Fast 8 team made Mirren's Fast and Furious dream come true. After seeing a first look at her character, I feel like the movie will do Dame Helen Mirren's awesomeness justice.

More like this
Elizabeth Olsen's Chris Evans Friendship Update Was Accidentally Hilarious
By Grace Wehniainen
Hayden Panettiere Will Return For 'Scream 6': "We F*cking Won, Scream Fam"
By Jack Irvin and Jake Viswanath
Danny Boyle Knows Exactly Who He Wants To Be The Next James Bond
By Sam Ramsden
The 'Thor: Love and Thunder' Trailer Finally Shows Christian Bale As Villain Gorr
By Grace Wehniainen
Get Even More From Bustle — Sign Up For The Newsletter