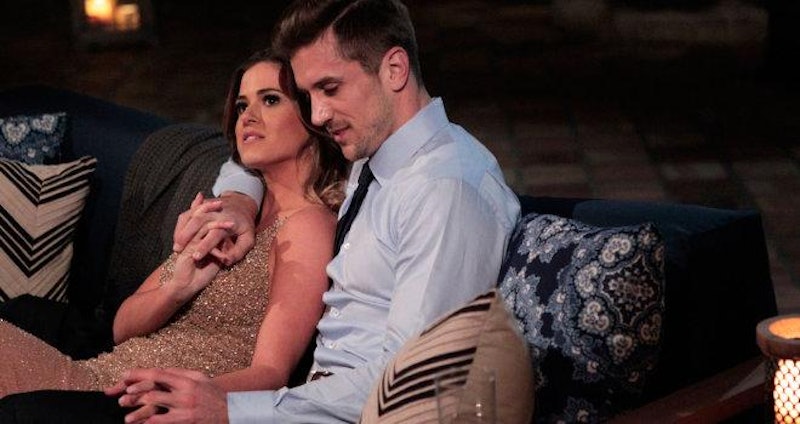 We've all had a full season head start on the rumors about The Bachelorette winner being on the show for "the wrong reasons." So, whether you're on his side or not, it's nice to finally get a chance to hear Jordan Rodgers responding to the cheating rumors. In his own words, and head on. Of course, Jordan did technically address the issue with JoJo Fletcher herself, who should be the only person whose opinion matters in this. But that isn't always how things go.

During airing, Jordan's ex-girlfriend put up an Instagram insinuating that Jordan had cheated on her. The media kind of had a field day with it, which isn't entirely fair, given that Jordan had to keep his lips pretty zipped until the show wrapped. But, now that the Aug. 1 finale is behind him and he can go public with the fact that he won JoJo's heart, Jordan can also respond to some of those pesky whispers floating around on the wind. And that's exactly what he did in an interview with People .

When asked how it felt to have his motivation for being on The Bachelorette called into question, Jordan responded, "It was awful. It hurts because judgment and integrity are things that you build and try to maintain over a lifetime, and it just takes one person [saying something] out of malice that makes news." Personally, I think, yeah, it's a bummer, but that is the world of reality television, and it's one you signed up for. If you come away from it with a loving fiancée who trusts you, and a few strangers on the internet who don't, I think that's overall a net gain. Especially because, as Jordan points out, this is far from his first experience battling this kind of negative energy:

My entire life and career has been an uphill battle. I lived in 13 houses growing up. We never owned a house; we didn't have money. So when people say I'm entitled, that's not at all true. It's tough when people who don't know me assume that they do.

At the end of the day, all you can really do is be yourself, and the truth will come out eventually. Whether JoJoJo — easily my favorite couple name I've ever come up with — makes it long term, or there turns out to be some truth to the rumors that have been flying around, only time will tell. In the meantime, it's only fair that we finally get to hear some answers straight from the source, and that Jordan get a chance to set the record straight himself. Plus, it's really beautiful to hear him say things like, "I definitely wasn't on the show for fame. My goal every step of the way was to be open and honest with JoJo and let myself fall in love." (And presumably not let Meat Chad get into his head.)

Congratulations to the happy couple, but especially to Jordan, who I imagine is feeling pretty relieved right now that he's finally able to speak in his own defense.