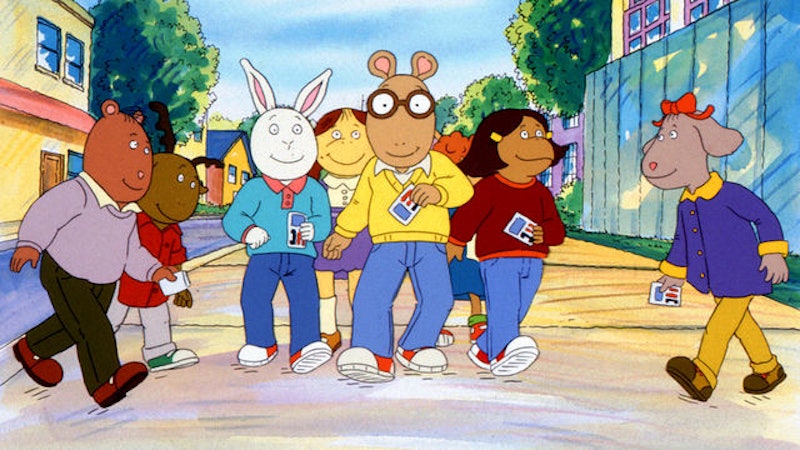 Ah, the '90s. We had Pokemon and Full House and a President Clinton... and sure, most of those things are making a comeback. But we still miss some of the great book series we read in the '90s. The '90s were a great time to be a young reader, after all. We had Harry Potter, the Baby-Sitter's Club, and those scary Animorph covers. It was a magical decade for literature. But looking back... a lot of the stories we loved in the '90s weren't all they seemed. Here are some '90s books that weren't quite about what you thought they were about.

Or at least, looking back at these books now, they all have a second level that totally escaped us as kids. Which makes sense. It was the '90s! We were all hopped up on Nicktoons and Go-Gurt! We didn't have the time for close reading analysis. We had to wear chokers and feed our tamagachis. And let's not forget that this was the decade that presented Furbies as an appropriate toy for children. So clearly, everyone's judgment was somewhat impaired.

So if you're looking to dive into some '90s reading nostalgia, here are a few books you might want to take a second look at. They might be just a little different than you remember:

1. Little House on the Prairie series by Laura Ingalls Wilder

What we thought it was about: This series was first published in the '30s, actually, but boy was it popular in the '90s. We all thought it was a fun, scrappy story about pioneers on the frontier, hanging out with oxen. Totally innocent fun!

What it was really about: Colonialism. And American exceptionalism. Sorry folks, but this series was pretty intensely racist towards Native Americans, and pretty much in favor of European settlers taking over their land... a fact that flew over a lot of our heads as little kids.

2. Julie of the Wolves by Jean Craighead George

What we thought it was about: Plucky young Julie (or Miyax) runs away from home and ends up living with a pack of wolves deep in the Alaskan tundra. It made us all want to run away and live with wolves, too!

What it was really about: Forced child marriage. Yeah, Julie runs away from home because she's been abused and forced into a marriage she doesn't want. And she's 13. The book still focuses on her life with the wolves... but the premise is so much more serious than we realized as kids. This book was also problematic in its representations of Alaska Natives.

3. A Series of Unfortunate Events by Lemony Snicket

What we thought it was about: Three unfortunate orphans go from bad situation to bad situation, always trying to escape the clutches of the villainous Count Olaf and his equally villainous girlfriend.

What it was really about: Incompetent adults. I mean, yes, the story revolves around the three Baudelaire orphans and their misfortune. But one major theme of the book that we probably missed as kids is adult incompetence. Even the "good," "nice," and "well-meaning" adults repeatedly refuse to believe the orphans. They often choose to follow the rules rather than help the kids—there's a lot more social commentary on the second read-through.

4. The Arthur Series by Marc Brown

What we thought it was about: A cheerful little aardvark kid has adventures! And somehow he has a pet dog, despite also having sentient dogs as friends.

What it was really about: A child being bullied into plastic surgery. Most of us don't remember the very first book in the Arthur Series. But in Arthur's Nose, the character is drawn a lot more like a real aardvark, with a lengthy, trunk-like nose. Arthur is teased so much for his nose, that he goes to the doctor to get a nose job. He eventually decides to keep his nose as-is... but later in the series his sizable nose has shrunk to just two nostrils. So... are we supposed to assume that Arthur did end up getting a nose job??

What we thought it was about: This kid is sent to a horrible camp where they make him dig holes! Also there's a mystery and something about carrying a pig up a mountain!

What it was really about: The prison industrial complex and racism. Seriously. Give this book a second read. A lot of the stuff about Camp Greenlake is a biting commentary about the way America runs its prisons (and how many people are imprisoned for crimes they didn't commit).

What we thought it was about: Two little kids have a magic treehouse that can transport them through time and space! Bonus: we all learn about dinosaurs or knights or whatever.

What it was really about: An incestuous sorceress tricks two children into doing her bidding. OK, so I know that Mary Pope Osborne reinvented the character of Morgan Le Fey from Arthurian legend—in the Magic Treehouse she's just misunderstood. But in mythology she's usually portrayed as a sexually aggressive, evil enchantress who has an affair with her half-brother... so... it kind of adds another dimension to the whole cutesy treehouse thing.

What we thought it was about: This kid decides to replace the word "pen" with the word "frindle." Wacky complications ensue!

What it was really about: The evolution of language and questioning the status quo. Sure, some of the more astute kids reading Frindle back in the day might have understood the larger implications... but most of us missed a lot of the commentary on how older generations resist the evolution of language (slip this book to all the old people who complain about internet slang).

8. The Adventures of the Bailey School Kids by Debbie Dadey

What we thought it was about: A third grade class suspects that their teacher is a vampire! Spooky!

What it was really about: Kids gawking at adults who deviate from the norm. Seriously, kids, stop being so weird about people with alternative lifestyles.

9. Where the Wild Things Are by Maurice Sendak

What we thought it was about: Another pre-'90s book that was still hugely popular when we were growing up. A little boy has a wild adventure with monsters after being sent to bed with no supper!

What it was really about: Anger. Well, how children deal with anger, boredom, sadness, and other emotions. Looking back, Maurice Sendak has created a much more nuanced and psychologically intense portrait of a little kid having a tantrum than we gave him credit for on the first read.

What we thought it was about: A little orphan boy goes to wizard school!

What it was really about: OK, so it really is about a little orphan boy who goes to wizard school. But a lot of us '90s kids have discovered there's so much more to this story every time we reread it... at this point, I think it's fair to say that the Harry Potter books are as much about recapturing the magic of our own childhoods as they are about kids at wizard school.

More like this
16 Novels That Paint A Realistic Portrait Of Abortion
By K.W. Colyard
'Bridgerton' Season 3 Includes A Major Cast Shake-Up
By Grace Wehniainen
Candice Carty-Williams’ 'People Person' Tackles Daddy Issues With Warmth
By Sam Rogers
The Trailer For The 'Game Of Thrones' Prequel 'House Of The Dragon' Is Dark AF
By Grace Wehniainen
Get Even More From Bustle — Sign Up For The Newsletter