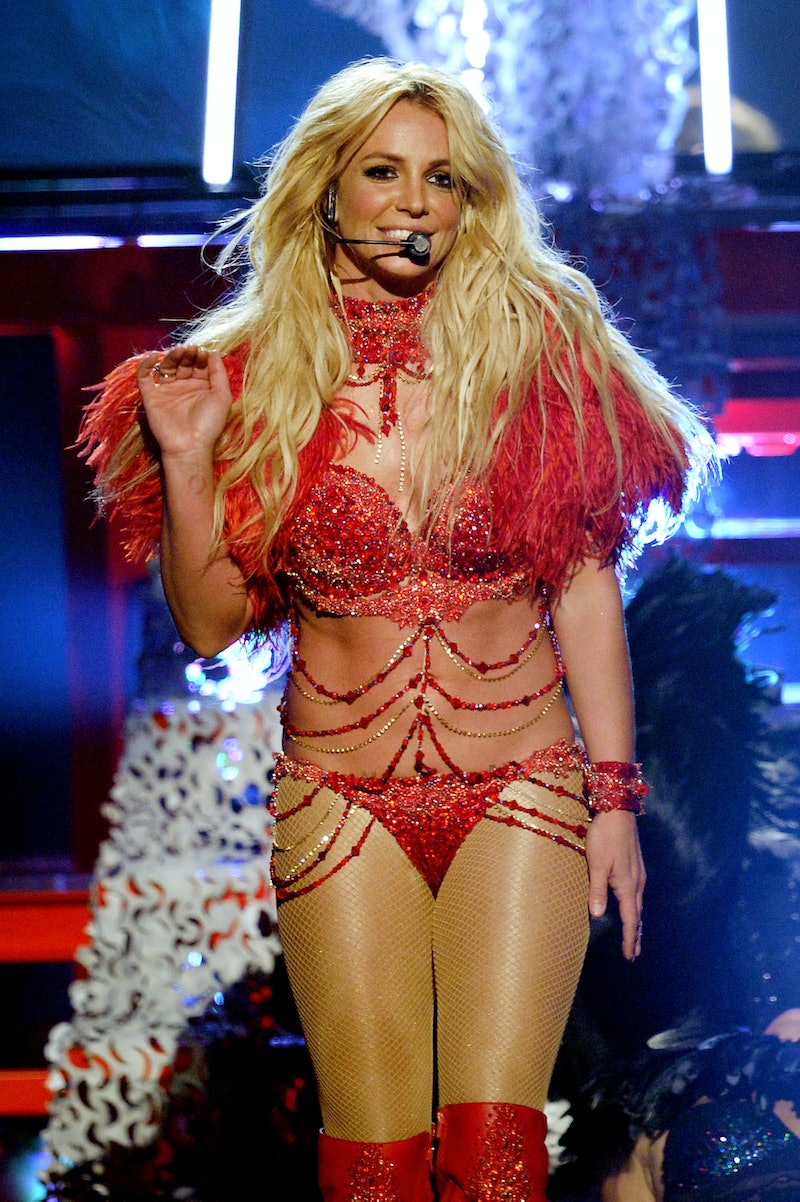 Holy sizzling Britney, guys. If you've just about recovered from the news that Britney Spears' new album, Glory, is being released August 26 (and the truly glowing cover art that accompanied the announcement), then brace yourselves, because Brit-Brit has another treat in store. You can now listen to Spears new song "Private Show" via Spotify and, sweet mercy, is it good. Brimming with the sort of bubble-bursting pop that makes you want to bathe in pure sugary goodness, the song is Britney in full-on strutting showgirl form. She's back, you guys, and it feels so good. But besides being a confident, joyful roar of her unparalleled showmanship, what is Spears' "Private Show" about?

Well, "Private Show" is actually about a lot more than you might imagine. For starters, it shares the same name as the pop star's latest perfume. In an interview with Entertainment Tonight, she explained what "Private Show" is about, and how it was made to be complimentary to the scent of her new perfume:

'Private Show' is inevitably a sexy song and it promotes feeling sexy and girls feeling alive and I think that’s fun for girls... I think the scent definitely has a combination of all those things.

Promoting a positive celebration and enjoyment of female sexuality is something that Spears recently delivered with her other single, "Make Me." While "Make Me" seemed to express a side to female sexuality that demanded respect and action from a lover, "Private Show" seems to be much more of a personal celebration of female sexuality. By tying the song in with her perfume, Spears is also clearly celebrating that joyful feeling of truly owning your sexuality, of being unapologetic of it, and of expressing it in a tactile, fun way.

"Private Show" is also incredibly playful when it comes to double meaning, though. Many of the lyrics to the song show the singer proudly celebrating her position as the undoubted head showgirl of pop music, but they also double up as being a flirtatious brag of female sexual prowess. Here, the boundaries between the stage and the bedroom are gleefully blurred:

We don't need crowds, we just need usPut my feelings up, about to be roughAll my tricks, they're spectacularMy encore is immaculate

Swing it to the left, swing it to the rightStrutting on the stage, center of the lightsDripping in smiles, they come on downTake your seat now

There's also an intimacy to the lyrics too, though, with Spears seeming to imply that, even when she's on stage or camera, performing in front of an audience, that she's really only performing for that one special person in her life (don't suppose that person could be me, could it?). She's putting on a "private show" just for them.

All in all, though, "Private Show" seems to be a song about having fun in the bedroom. About being proud of your body, your sexuality, and your talents (amen to that), and using them to not just pleasure a lover, but to also enjoy yourself in the process. But hold up. There is one lyric in the song that is truly puzzling me. We all know that Spears is a good old fashioned Louisiana girl, with a deep love for wholesome, home-cooked food, but like, what is this all about?

Can we do it all again?Nah, I'll take a bowUp, down, run it ‘roundTasting all my apple pieApple pie, satisfy

Apple pie? For real? I'll have to allow your imaginations to run rampant on that particular innuendo, but I think we all know what she's talking about. And, frankly, the song is totally sultry and fun enough to inspire me to want to serve up a slice of my very own apple pie later on tonight. Now, if you'll excuse me, I have some dancing I need to do.