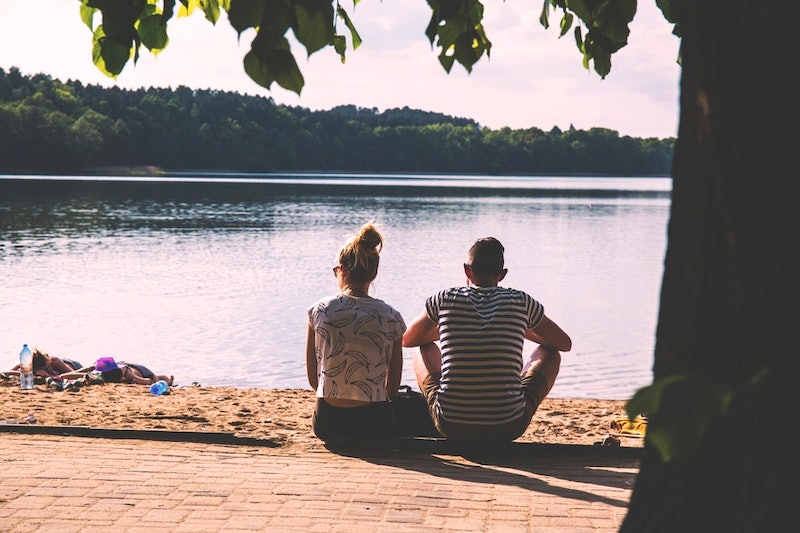 When you're in the throws of a new love, it's really easy to get swept up in the starry-eyed wonder of it all. You can't get enough of your partner because they seem so perfect. And of course, that's utterly adorable. But that same passion can also make you blind to relationship problems that won't go away.

These are issues that can easily be glossed over in the beginning, only to become major problems once the honeymoon phase cools. You suddenly realize (with shock and horror) that your partner is human, and that they have bad habits, problems, and annoying eccentricities just like everybody else. And that's not including the issues that may crop up as the relationship goes on (i.e., cheating), or come to a different light as the relationship becomes more serious (i.e., whether or not to have kids).

It can be tempting to shove it all under the proverbial rug, but these types of problems won't go away on their own. They'll either require some hefty discussion, or wind up being total deal breakers. Take cheating, for example. "Sometimes a partner will not know right away if a relationship problem is a deal breaker," Kim Chronister, Psy.D., tells me. "A partner may cheat and although some will advise to leave the relationship, with some time and counseling, the pros of staying in the relationship may outweigh the cons."

Point is, problems are subjective. It's up to you and your SO to work through them. But just remember, issues like the ones below are unlikely to go away on their own. So don't be afraid to speak up.

1. Whether Or Not A Baby Sounds Like A Good Idea

Like I said above, the topic of babies is bound to come up at one point or another. And it will be so exciting — unless you disagree. "Often when a couple disagrees, a compromise can solve the problem," said Merle Ann Bombardieri, MSW, LICSW, ACHP-SW, on GoodTherapy.org. "But you can’t have half a baby or be parents in odd numbered years and childless/childfree in even numbered years." It just doesn't work. So be willing to talk about this early on, and see if a fair agreement can be made.

2. How To Save And/Or Spend Money

Money arguments are so common that 65 percent of couples get wrapped up in them. And it's those same disagreements that are the number one reason married couples say they divorce, according to Melanie Pinola on Lifehacker.com. It is possible to work it out (think separate savings accounts, spending rules, etc.), but clearly it's a problem ya'll want to address early on.

3. To Be, Or Not To Be, In An Open Relationship

Let's say you really want an open relationship, but your partner doesn't. It'll be really tough to compromise if one person views it as horrible cheating, while the other doesn't. And even if your partner kind of agrees, it’s a high risk proposition, according to Stephen J. Betchen, D.S.W., on Psychology Today. (Rules can be broken, and feelings hurt.) It's up to you two to decide if it's worth working on.

4. How, Exactly, To Go About Arguing

Arguing can be healthy, especially if you both do it in similar ways. If you argue completely differently, however, it could spell future problems for your relationship. In fact, couples who fight differently are more likely to split, according to Stephanie Castillo on YourTango.com. So start agreeing on some tactics now, lest your relationship go up in flames.

5. If That Cheating Thing Should Spell Disaster

Have you heard the saying "once a cheater, always a cheater?" It has a nice ring to it, but it isn't always true. If you address the root cause of the cheating (whatever it may be), it could be possible to avoid it happening again in the future. It is also possible to move past all the hurt feelings. "However, if resentment, anger, or sadness persist despite efforts to heal, that may indeed be a deal breaker," Chronister says.

6. How Clean An Apartment Should Be

If you're a neat freak, there's nothing more annoying that sharing a space with someone who is sloppy. (And vice versa, of course.) It's a recipe for endless arguments as the two of you disagree about laundry and dishes and who will take the garbage out. Unless you agree to a chore chart or something, the problem is unlikely to go away.

7. Whether To Live In The Country, Or The City

Ah yes, the age old question of where to live. It happens to all couples as they reach the crucial "move in together" period, and of course it's great if you both agree. And yet it's not always the case. If you can't agree it may mean going your separate ways. (Sad, I know.)

8. What Constitutes An Ideal Sleeping Schedule

Some couples may find sleeping together incredibly difficult, and it can end up leading to some other relationship problems. "There haven’t been many scientific studies about the impact of couples sleeping together," said Cindy Bressler on HuffingtonPost.com. "However, experts believe oxytocin, the 'love hormone,' is released through touching, including cuddling." Without that closeness, you two might start to feel less connected, so it's probably worth coming to a compromise.

9. Any Type Of Alcohol Or Drug Addiction

What seemed like a silly little quirk early on has now proven to be quite the issue, and you've found yourself dealing with an addicted partner. Of course you aren't obligated to deal with their problem, but if you want to help, the best place to start is with zero judgement, according to Darren Haber, MFT on PsychCentral.com. If you guys can stay on the same side, it may be possible to work through together.

10. A Decided Lack Of Trust

A lack of trust is a huge deal breaker, especially in long term relationships, according to Katherine Schreiber on Cosmopolitan. Whether it's due to that aforementioned cheating, or it was simply never there to begin with, the ability to trust each other is so important if you guys plan to move forward. If it's not there, make it a point to work on the issue.

To end on a lighter note, let's talk about B.O. According to Schreiber, poor hygiene is another thing some couples can't look past. Of course, you two will likely grow to love each other's smells. But there apparently are some things even lovers can't grow to, well, love. If you want to be a couple, though, you should be willing and able to be honest with your partner — even if it means telling them they smell in a way that makes you uncomfortable.

It's a varied list, for sure, but just goes to show all the ways a relationship can be tested. Whether the above are deal breakers or not is up to you. Just be sure to talk about them, since they won't be going away otherwise.