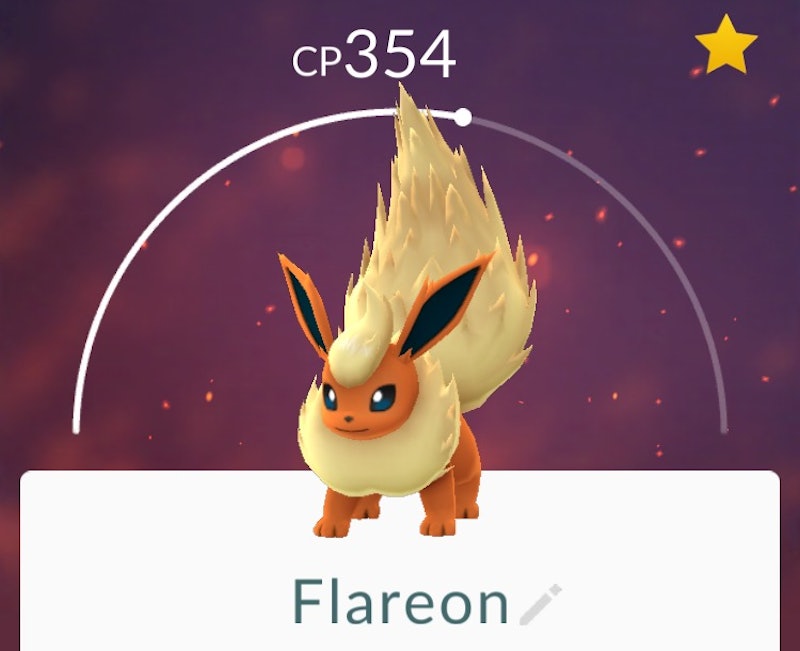 The people's choice of the Pokemon world right now, it seems, is the Eevee. And since they’re adorable and evolve into a variety of different forms — it’s no wonder everyone wants one. So if I’ve piqued your interest and you want to know how to get an Eevee to evolve into a Flareon while playing "Pokemon Go," never fear, because it’s actually extremely easy to accomplish. And it could seriously help you up your Poke-game — which let's face it, is valuable information right now.

Why is the fox-like Eevee so sought after? It might have something to do with all the options available in its evolutionary process. In traditional Pokemon mythology, Eevee can morph into five different creatures, depending on the trainer: Flareon (fire), Jolteon (electric), Vaporeon (water), Umbreon (dark) and Espeon (Psychic). So far, we only know of three available for "Pokemon Go" — Flareon, Jolteon, and Vaporeon — but what's even cooler is the fact that, with a handy trick, you can actually control which of those three final forms your Eevee evolves into. (And yes, the trick has been confirmed by Niantic CEO John Hanke as an Easter egg built specifically into the game.)

Before you make your evolution choice, it's worth knowing the major benefits and setbacks to each one, so for the curious, here's the lowdown on Flareon. This fire-type Pokemon unfortunately won't stand a chance against a water creature, because... well, fire. But what does make it a great asset to your set is the fact that the Flareon can provide you with the highest base attack out of all the Eevee evolutions — so, if you need to up your battle game at Pokemon gyms, this creature could be your best bet. However, Mobile & Apps notes that the Flareon has the slowest move set in the bunch, which therefore balances out this major advantage.

(The site also notes that choosing the Flareon evolution over the electric-type Jolteon is a smart move as the Jolteon is widely recognised to be the weakest out of all these Eevee evolutions. Obviously this depends on what you've already captured as well as your needs as a trainer, but this information is definitely good to know, too).

So how can you start evolving? Well, you'll be pleased to know the whole process is incredibly simple. Here's what to do once you've captured yourself an Eevee.

1. Go To Your Eevee's Profile Screen

You can do this by tapping the Pokeball on the map screen, then tapping "Pokemon," then tapping on the Eevee in your Pokemon list you want to evolve.

The default nickname for all Pokemon is just its species name, so in this case, you'll be tapping the word "Eevee" beneath the little Eevee avatar. Doing so will bring you to this screen.

Seriously. That's all you need to do to prep your Eevee for a Flareon evolution.

You're probably already familiar with how to evolve a Pokemon by now, so I'll spare you the details; just make sure you have enough Eevee candies, then go ahead and tap the "Evolve" button. Now you've got your very own Flareon. Go forth and catch 'em all!