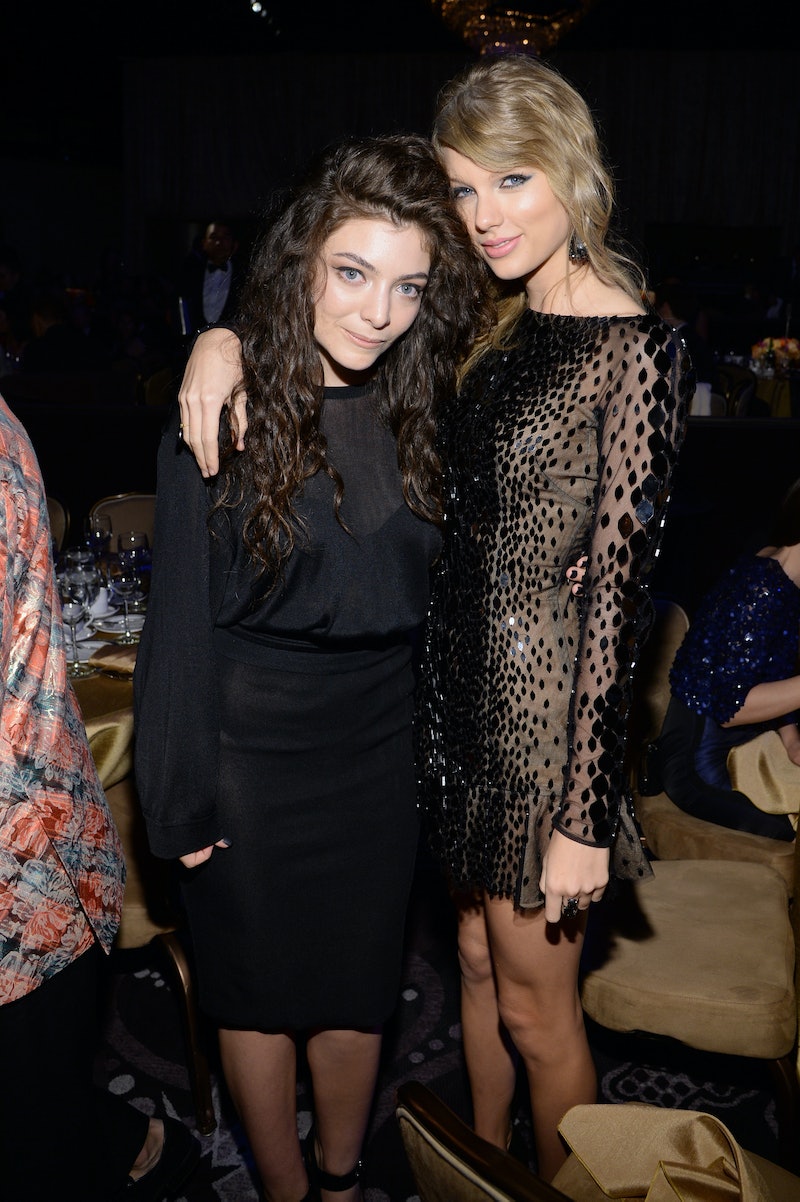 When you're as famous as Taylor Swift, it's probably a pretty rare occasion when you actually have to defend, not deny, a relationship you have with another celebrity. Yet that's the case with Swift's friendship with fellow singer Lorde, which, despite seeming completely legit, is now being questioned by people doubtful that two powerful women could actually get along. During a recent radio interview in which the duo's friendship came under fire, it was Lorde who found herself protective of her relationship with Swift, thanks to the probing, argumentative questions of the interviewer who was convinced that the two singers were hiding something major — like, "lesbian relationship" major.

Asked Kyle Sandilands of KIIS FM, "I see you guys pictures everywhere, are you guys together now?," before quickly clarifying "not together as in lesbians, I’m not talking about 'Ellen together.' I’m talking about, like, you guys are friendly, right?"

Being the badass that she is, Lorde shot back, asking Sandilands "is there something wrong with lesbians?"

The clearly classy radio host's response: "Oh my god no, I would love that! Are you going to confirm now you’re in a lesbian relationship with her?"

"Don't even try it," Lorde said. Still, Sandilands continued asking about Swift, trying to get Lorde to give more than an "uh... yeah" to comments on the Red singer's personality. Eventually, the host got fed up, saying, "don’t go too overboard explaining the friendship then," to which a clearly annoyed Lorde replied, "I won't, believe me."

With an interviewer as rude as Sandilands, we give Lorde huge props for not stooping to the shock jock's level. Besides, there's no reason to think that the duo's friendship is anything but legit — here are a few reasons why we believe in Lorde & Taylor (hey, it could work):

Like, really eat. In November, the singers were spotted at Shake Shack together, and as all New Yorkers know, there is literally no food you can order at Shake Shack that doesn't require at least ten napkins. And then there's the time in December that Lorde and Swift got hibachi together, which means that at some point, onions were on fire and shrimp was flying in the air. If the typically-prim Swift is letting Lorde see her with french fry grease dripping down her chin, then we have to believe that their friendship is more than just for show.

Swift, one of the biggest superstars in the world, is understandably a very private person. One can imagine that on occasions like birthday parties and girls nights in, only the singer's closest friends are invited to join. So when Lorde was spotted attending Swift's 24th birthday party last December, it showed that the "Royals" singer must be a newly-appointed member of Swift's tight inner circle.

3. They Copy Each Other's Style

Lorde and Swift's personalities must be a lot more similar than we think, because when it comes to their fashion style, the two couldn't be more different. While Swift prefers colorful dresses and high-waisted skirts, Lorde's outfits tend to have two qualities: black, and long. Yet recently, the singers have been stealing each other's style, with Swift wearing a — you guessed it — long black dress to an Oscars afterparty and Lorde rocking florals, colors, and even skirts that end inches before her knees. Conclusion? The stars are raiding each other's closets, or at least taking notes on each other's styles, as true friends tend to do.

4. Lorde Wouldn't Be Friends With Someone Just for PR

While some of Swift's new friends — we're looking at you, Karlie Kloss — seem to be hanging out with the singer just for PR purposes, we highly doubt Lorde would stoop that low. The 17-year-old has made her views on independence, feminism, and not taking shit from anyone very clear, and it's hard to believe that she'd befriend Swift just for the headlines. Lorde has had no problem rejecting other big-name stars like Selena Gomez even if that led to bad press, so if she didn't want to hang out with Swift, you can be sure that she wouldn't.

5. They Support Each Other's Wins

The telltale sign of Lorde and Swift's friendship? Their support for each other, whether that means Lorde tweeting about Swift's Grammy performance or Swift posting a photo of the two of them with the Lorde-approved caption of "and you know... we're on each other's team." In her Rolling Stone cover story, Lorde called Swift one of the few artists to capture "real teenage voices"; although Swift, true to her style, has kept mostly mum on the friendship in interviews, she's shown her support by Instagramming photos of the two of them hanging out on the beach and attending parties. Swift has said she has no tolerance for women who don't support other women, and in the case of her friendship with Lorde, it's clear that the singers have each other's backs.