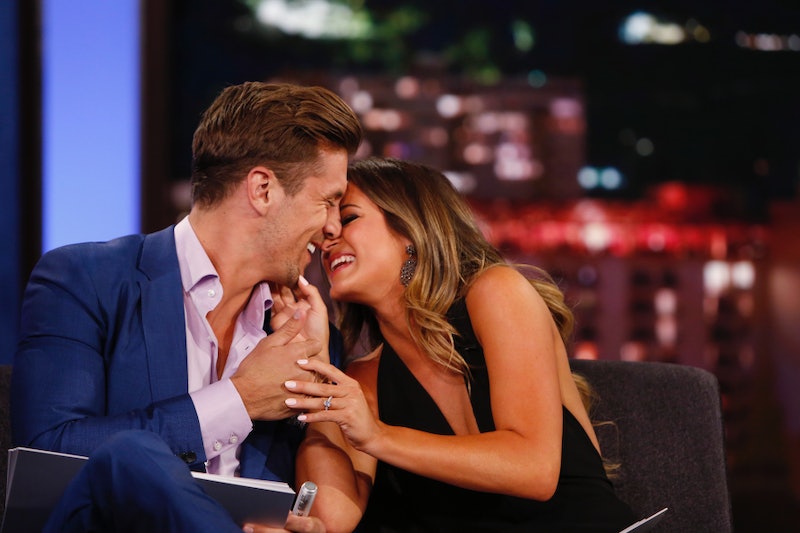 The minute that the world found out that Jordan Rodgers would be on The Bachelorette , everyone wanted to know everything about the younger brother of NFL quarterback Aaron Rodgers. Would Jordan be like Aaron? Would Aaron be on the show? He wasn’t on the show, but Aaron Rodgers’ presence was everywhere — it seemed like every other date was football-related (to show off Jordan’s skills, since, let’s face it, he was the frontrunner the whole time), and any time someone asked about Jordan’s life, Aaron was brought up. Throw in the fact that Jordan was a middling quarterback at one point in time, and it was the “comparisons to Aaron” show. He did not appear on The Bachelorette, but will JoJo meet Aaron Rodgers now that The Bachelorette is over?

That’s hard to say. Any mention of his brother made Jordan absolutely bristle, and we found out why during hometowns. Besides the fact that it is infuriating to constantly be compared to your sibling, viewers learned that Jordan and aren't on talking terms. We don’t know why, we don’t know when, and we don’t know how, but Aaron Rodgers is pretty much estranged from the rest of the Rodgers clan. JoJo talked about it more with oldest brother, Luke, during hometowns, and both brothers were visibly hurt and hesitant to talk about the rift on television. I mean, wouldn’t you be? Family business isn’t exactly something that you want aired out on national television, and there’s no indication that the family has made up, and thusly, no evidence that JoJo and Aaron know each other yet.

Chris Harrison made one last push for Aaron Rodgers dirt on the After The Final Rose special, prodding Jordan with questions about whether JoJo has met Aaron and whether he and girlfriend Olivia Munn will attend JoJo and Jordan’s wedding. Jordan artfully dodged the inquisition, turning the focus back to how excited he is for his future with JoJo. That was a close one, Jordan. I can say that if JoJo and Jordan make it to a wedding and decide to have it televised, I'm sure Aaron and Munn would not be going. It didn’t seem like Aaron wanted anything to do with The Bachelorette when Jordan got cast, and, according to an interview Munn did with Entertainment Tonight, "Aaron doesn't really ... I don't think he's really talked with his brother [about the show] ... It's complicated — I'll say that."

If the wedding isn’t televised, and it’s just a regular old wedding with regular old people? The chances are probably better that Aaron will show. No cameras, no Chris Harrison, and no chance of Aaron’s reactions being put on national television would up those odds. I would hope that any sort of family problems would be squashed with the news of a wedding — no matter how you meet, a wedding is a celebratory occasion, and one that all beefs should be set aside for. But this world isn’t perfect, and neither is any family, so it may not be that easy. Here’s hoping for a happy resolution to everyone involved.