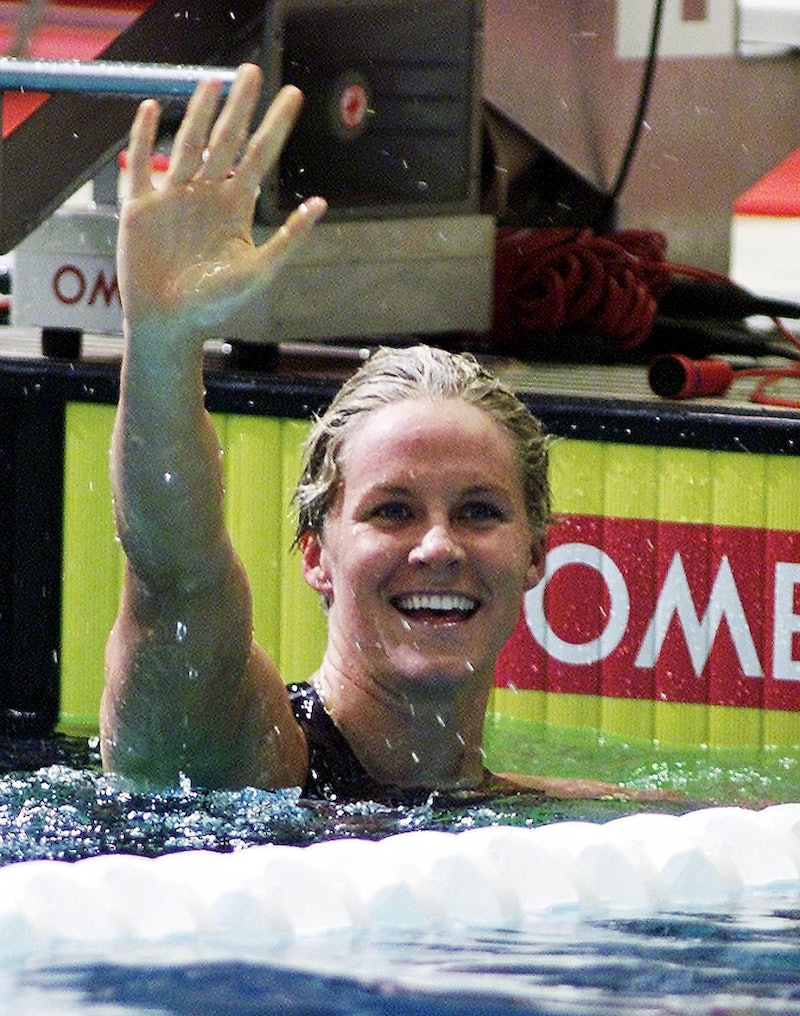 Jenny Thompson can swim like very few can. She took home more Olympic medals, 12, than any other female swimmer — ever — between 1992 and 2004. These included eight gold medals, and all from relay events. So what is Jenny Thompson doing now?

Before we get to that, let’s recap all she has done — namely, in swimming pools around the world. Even pre-Olympics, Thompson broke several swimming records. Back in college, she won 19 titles in the NCAA while at Stanford. She then joined the U.S. senior team and spent the next 10-plus years collecting medals during the World Swimming Championships and the Olympic Games. Fun (and ~amazing~) fact: Thompson received 31 medals in the Worlds, 16 of which were gold. Talk about putting your mind to something and achieving it.

So, what about now? Thompson works as an anesthesiologist and surgeon in Maine. Yep. You may not be surprised, as her swimming career — i.e., focus and determination — probably helped prepare her for her career out of the water. (Bustle has reached out to Thompson’s team for comment and will update accordingly.)

“I swam for many, many years: from when I was eight to when I was 34 and I was ready for the next chapter,” Thompson told Yankee magazine. “I really appreciate everything everyone did for me, and I wanted to give back. I’m just giving back in a different way; it’s a different arena. I turned my energy and passion toward medicine.”

As though the Olympics were not tough enough, then Thompson went to med school and started a whole new career?! Whaaaat? A-ma-zing.

“I think I’m inspired by challenge; I seek challenge in my life, and that’s what keeps me going,” she said to Yankee. “Medicine is a different kind of challenge from swimming. It’s interpersonal, it’s clinical, and it’s definitely rewarding in a way that swimming wasn’t. It’s more selfless. … Medical school was a very humbling experience,” she added. “It was probably the hardest thing in the world, going from #1 in the world in my field to the bottom of the bottom. … I wanted to go into something completely new and challenging and have a career for a lifetime.”

It definitely sounds like she’s had careers of a lifetime.

To commemorate Thompson’s swimming legacy, there’s even a pool named after her. Not many people can say that, right? The Jenny Thompson Outdoor Pool is a 50-meter competition pool in Dover, New Hampshire, Thompson’s hometown. It’s also used for recreational swimming, and you can go visit it for yourself, professional swimmer or not.

Since her time in the Olympics, Thompson’s also completed a few triathlons and volunteers with Swim Across America, too, a charity which raises money for cancer research. Oh, and she’s also gotten married and has two children. Impressed yet?

So, you already know Thompson was super dedicated when it came time to being in the pool, but how about outside of it, cheering on others? In July 2012, even at 30 weeks pregnant, she flew to the U.K. with her husband to do just that at the London Games. She told ESPN:

I’d love to be able to go to the Olympics forever, because it was such an important part of my life. Experiencing it in the flesh and cheering for the home country is what I love. It’s a wonderful cultural event and the best show on earth. It’s definitely awesome to watch on TV, but it's just that much more personal over there.

I found watching the Olympics in 2004 to be a blast. I actually enjoyed watching more than I enjoyed competing. The Olympics are very stressful; there’s no way to get around it. It’s a lot more fun when you can sit up in the stands and have a beer.

I’ll toast to that. The Olympics begin today in Rio, so stay tuned to Bustle for coverage.

More like this
Here’s What Sarah Jessica Parker’s Canned Cosmo *Actually* Tastes Like
By Emma Garza
Rihanna & A$AP Rocky’s Astrological Compatibility Proves They'll Be Amazing Parents
By Nina Kahn
Are Tom Daley & Louis Theroux Bound For 'Strictly'?
By El Hunt
Marcus Rashford Took Inspo From Kravis For His Adorable Proposal To Girlfriend Lucia Loi
By Frances Stewart
Get Even More From Bustle — Sign Up For The Newsletter