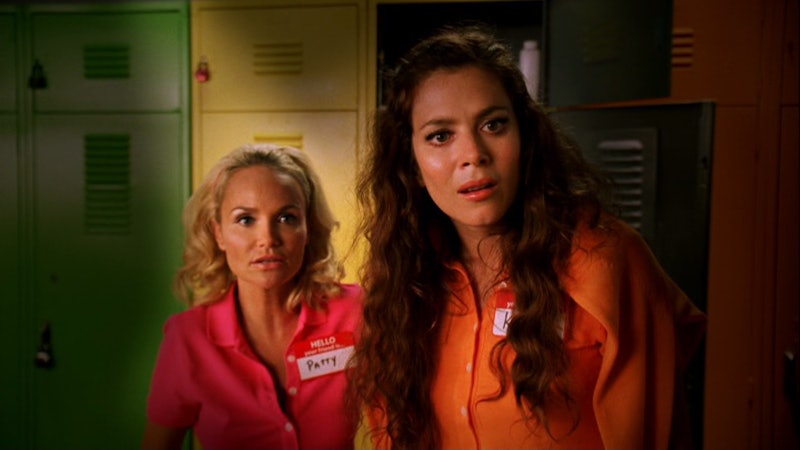 Female friendships are vital, life-sustaining relationships, but they are not perfect and they don't always start out in the most conventional of ways. Take Pushing Daisies ' Olive and Chuck, for instance. Olive was not fond of Chuck when she first showed up at the Pie Hole looking all lovey with Ned. Chuck instantly became the competition in Olive's eyes, putting the two women on opposite sides of... well, not a love triangle, because Ned was all in where Chuck was concerned, but definitely a crush triangle. They were two women in love with the same guy and there are few situations more emotionally fraught than one where two people have feelings for the same person.

Having your two female leads both like the same guy is a situation that can lead to problematic storytelling — or it can be an unconventional launching pad for a brutally honest look at a not so perfect, but still amazing female friendship. Olive and Chuck's two-season evolution is a master class in how to get over loving the same guy to become best friends. Pushing Daisies truly did something special with its not-quite a triangle, by allowing Olive and Chuck's relationship to progress past Ned.

If you and another perfectly nice person have ever found yourselves in a situation where you are fighting over a love interest, take a step back and really look at who you are fighting with. They could be your future best friend if you take lessons from Olive and Chuck.

If Olive and Chuck had never acknowledged how much they both cared about Ned to each other, they never would have moved forward. It's an awkward subject, there is no doubt about it, but, when Olive and Chuck actually talked to each other about how they felt about Ned, it was the start of them getting to know each other. Liking the same guy is an unusual bit of common ground on which to start a friendship, but it is still common ground.

2. Think About What Matters Most: A Friendship That Could Last Forever

Olive had this idea of a happily ever after with Ned that was never going to happen, and the fantasy was ultimately holding her back. It is way too easy to let crushes take advantage of you. Ned was definitely guilty of taking Olive's loyalty and feelings for granted, but Chuck valued her ideas, feelings, and heart. After the whole joining a convent incident, Olive seemed to realize Chuck was a positive force in her life, while Ned could be a toxic one without boundaries.

3. Find Something You Are Both Passionate About (Besides A Potential Partner)

Hey, if you like the same person, you probably have similar tastes in other, less emotionally volatile things. For Olive and Chuck, the Pie Hole was a place where they both felt at home. One of their first big outings together involved them sabotaging the sweets shop across the street when it threatened their beloved Pie Hole. After that, Olive and Chuck starting teaming up to solve mysteries together on the regular, and yes that was the best development ever.

4. Get To Know Each Other

Once you've found mutual passions, really delve deep and get to know the person you mistakenly thought was your competition. Olive and Chuck had wonderfully complementary personalities. They could sit and drink tea while they watched Digby and Pigby play, or they could call each other out when one of them was making a major mistake. The way in which Olive always had Chuck's back where the Aunts were concerned was beautiful, even when it meant utilizing a bit of tough love.

Once Olive and Chuck understood each other's circumstances, they allowed themselves to be completely open and silly. The end result was a lovely friendship built to last.

5. Let Go Of The Idea Of A "Perfect" Friendship

Remember the beautiful fantasy you had about your mutual crush? It wasn't realistic at all, was it? Your new friendship is not going to be perfect either. Sometimes, your friend will drive you crazy, and sometimes you will disagree. Olive and Chuck definitely had their share of fights, but they also loved magic shows, bonding over their pets, and coming up with the best inside jokes.

They turned what could have been a toxic situation into something beautiful. They became a support system for each other and pushed each other to be the best possible versions of themselves. That only happened because they realized romantic relationships are not the only relationships that matter, and sometimes new best friends come into your life under the most extraordinary of circumstances.