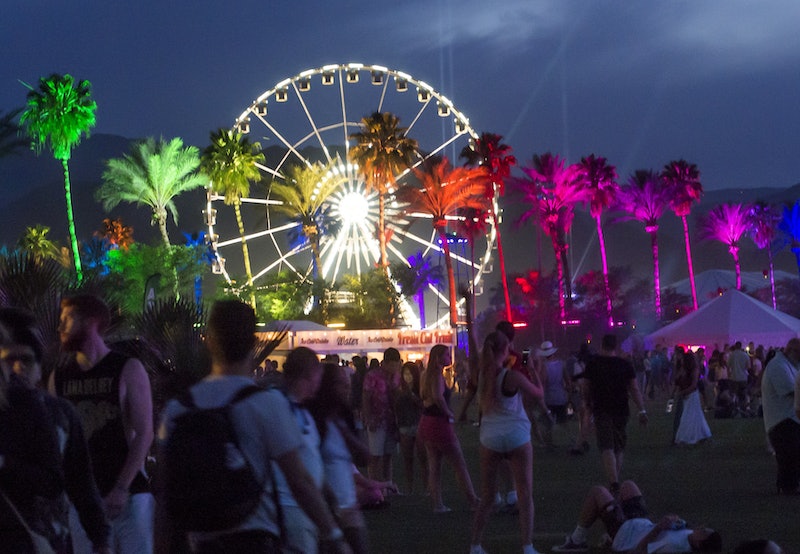 My tent or yours? That may be the new catchphrase after Tinder usage went up by 300 percent at Coachella's first weekend for the Palm Springs/Indio area during the music fest. And, why not? You’re in a barren desert. And it’s HOT (in the 80s and 90s), like the dry heat of Las Vegas. You’re even hotter because you’re wearing an eclectic, Burning Man-esque outfit that you pieced together—and you’re also surrounded by just over a half-million other people (579,000 total in 2014, averaging 96,500 per day), many of them single and around your age. And an endless number of bands, too, from Drake to Ryan Adams. And parties galore. And camping.

We all know someone on Tinder or have tried it ourselves. There are 50 million people on it and the core users are millennials (18-34). We’ve also all gotten crass/sex-based/“what r u wearing”/“want to come over” messages on it, at Coachella or not.

This Mashable article cites that the Coachella-based Tinder breakdown from last weekend looked like this:

In his Mashable article, the writer, David Yi, writes:

“On the first day alone, a festival-goer asked my colleague if she was a certain ‘Melissa’ from Tinder. She said no, though would have said yes if he was better looking, she admitted.” - David Yi/Mashable

Just like many of us have approached the wrong person at a bar, assuming he or she was our Tinder or online date, the same probably happens at Coachella. I imagine it’s easy to confuse someone with someone else, as the attire isn’t just jeans and tee-shirts like average rock music concert wear.

Unlike real-world, non-Coachella Tinder-ing, it may be hard to tell people apart.

A girl could type, “I’m the one with the flowers in her hair."Don't you see me?" you write.

Well, good luck to the person trying to find her. (At the festival, I don’t know what woman doesn’t wear flowers in her hair.)

Same goes for hats. Make sure when you type, “I’m the one in the straw hat,” your Tinder match knows which straw hat—the one tipped to the right or tipped to the left.

Here are a few Weekend #2 Coachella tips for hooking up (or not) with Tinder.

Yes, that means things Coachella suggests you bring along—backpacks, sunblock, smiles—but also pick up some condoms. A few years ago, I started dating someone and learned he had never used a condom. That’s right, 30-something years on the Earth and he’d always talked women into condomless sex. (Though I refused to be one of them.) So, be careful! These people are out there. Especially when drinking and substances may be involved.

You Tinder and Tinder and find yourself swiping right more and more. The sun sets. It’s dark. You may or may not be drinking. Your Tinder match may or may not be drinking. So, when it comes to meeting up, be specific and state exactly who you are so you don’t end up in the wrong tent. You may want to stand out, alone, so that you don’t get lost in the endless sea of flowers and straw hats.

3. Tell a friend where you're going.

Yes, the buddy system (whether you bring your friend along or not). Tell him or her where you'll be, when you think you'll be back. Perhaps have them come find you if you don't return by a certain time (or day).

Coachella doesn’t allow people to bring in drugs, alcohol, or narcissists, but we all know they get in somehow. All in all, Tinder or not, hookups or not, have fun!