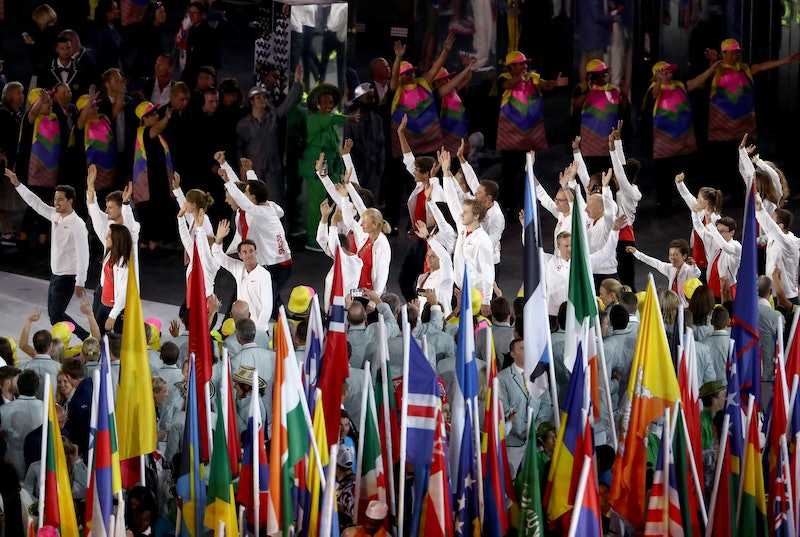 Instead of being at the back of the parade then, athletes from the United States, which translates into "Estados Unidos" in Portuguese, will march onto the stage much earlier in the ceremony. Other countries that will appear out of order — at least to English-speakers — are Saudi Arabia, South Africa, Germany, Qatar, Kazakhstan, Slovakia, Slovenia, and Spain, among numerous others.

Though the progression of nations in the Parade of Nations varies depending on the host country's language, there are a few rules that remain consistent across the board. According to one rule in particular, Greece always proceeds first in the ceremony, since the Olympic games — or at least a version of them — originated in the nation somewhere around 776 BC. Secondly, the host nation goes last out of respect for the nations it is so warmly welcoming.

Brazil's national language has roots that trace back to the year 1500, when Portugal colonized the South American country. Though the majority of the Brazilian population speaks Portuguese now, a small number of native languages still exist today.

The Parade of Nations is a cherished tradition among Olympians that encourages unity among participating countries. That being said, its duration can be incredibly lengthy. With over 200 nations participating it the Olympics, that shouldn't particularly come as a surprise.

During the parade, each nation's participating athletes march across the stage, some holding cameras and others waving as they make their way across the stadium. One athlete from each nation's team is elected by their team members or team captains to be the flag-bearer — the athlete who leads the pack during the parade. This year, for example, U.S. Olympic swimmer Michael Phelps was elected to the position. The athlete is the most decorated in Olympics history.

The Parade of Nations may seem like a long ordeal — and it is — but witnessing the camaraderie between countries from opposite sides of the world makes it completely worth it.