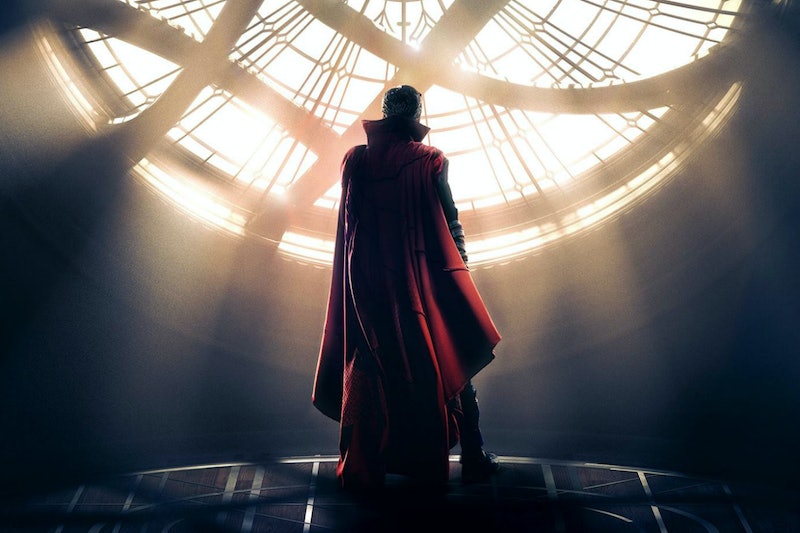 Good news for people who like news about the upcoming Doctor Strange film. There's a new Doctor Strange TV spot out, and it promises to be just as visually entertaining as it is magical — coming at no surprise, considering the mysticism inherent within Stephen Strange's journey. While the spot doesn't really show us any new information regarding the MCU adaption of Doctor Strange's story, it definitely paints a pretty picture of what's to come — and what a pretty picture that will look like in 3D. Posing the question: Should you see Doctor Strange in 3D or regular ole' 2D? If there's one MCU film you should wear those silly glasses for, it's this one.

Mirroring what we already know from previous trailers, the new TV spot shows us Stephen Strange's descent — or ascent, depending on how you look at it — from clean-shaven prestigious doctor to scruffy sorcerer. "This doesn't make any sense," he tells Tilda Swinton's The Ancient One, to which she replies "Not everything has to." But one thing that does make sense? Watching Doctor Strange in the version that — according to its director Scott Derrickson — it was intended to be viewed. Yeah, I'm talking about dimensions again. Specifically three of them. Watch the spot below.

As you can see/probably already know, Doctor Strange will be in a word, strange, which means that it has the opportunity to bend time, our minds, and ultimately its own sense of reality. Which means that it's a story that could really benefit from 3D, even more than any of its MCU predecessors. Ever since Avatar saw unprecedented success with its own 3D adaption, studios have implemented the effect on blockbusters time and time again. But, most of the time, you don't necessarily need to see the film in 3D in order to enjoy or understand its intentions. With Doctor Strange, this isn't the case. Derrickson spoke with Collider in April of this year, "There are times like what Disney is putting out with The Jungle Book — it’s certainly gonna be the case with Doctor Strange — that it serves the storytelling, that it advances the storytelling. And hopefully it helps bend people’s minds even more than with just the flat screen."

Let me get this straight. According to its director, the 3D used for Doctor Strange isn't just a special effect, it's a story telling tool. So, if you only really get the fully story in 3D, then I'd say you should get ready to put on those glasses when the film hits theaters this coming November.

More like this
What Does Doctor Strange’s Third Eye Mean?
By Arya Roshanian
The 'Thor: Love and Thunder' Trailer Finally Shows Christian Bale As Villain Gorr
By Grace Wehniainen
The 'Hocus Pocus' Sequel Finally Has A Release Date & It Makes Total Sense
By Shannon Barbour and Radhika Menon
Elizabeth Olsen's Chris Evans Friendship Update Was Accidentally Hilarious
By Grace Wehniainen
Get Even More From Bustle — Sign Up For The Newsletter