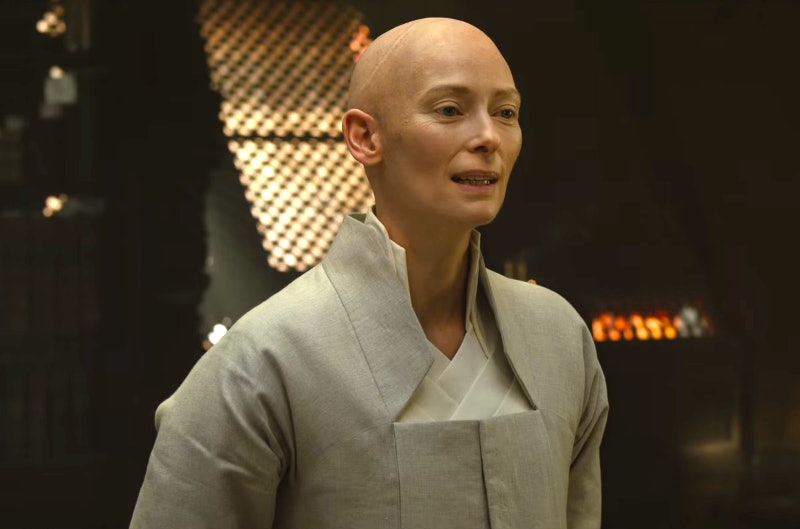 In the most unique movie to come out of Marvel in awhile, the Doctor Strange trailer released on April 13 revealed it's going to be a long wait until the film hits theaters in November. A huge part of that is thanks to Tilda Swinton's character in Doctor Strange, a mentor to Benedict Cumberbatch's titular superhero. Once you get past the trippy effects, Swinton's bald head, and Cumberbatch's American accent, you'll want to know more about this truly mystifying film — and more about Swinton's badass character.

For those of you unfamiliar with this particular Marvel comic (and, let's be real, that may be many of you, since it's not like it has Spider-Man notoriety), Doctor Strange is about a skilled and arrogant surgeon, Stephen Strange, who damages his hands in a car crash. He seeks a cure and travels to Tibet, where he meets Swinton's character, the Ancient One. Through his training in martial and magical arts, Strange becomes the Sorcerer Supreme and protects the Earth from supernatural forces. As seen in the trailer, we are talking truly magical elements here, with multiple realities and out-of-body experiences, so you'll want to heed the trailer's advice of "Open your mind."

Watch the full Doctor Strange trailer and Swinton in all its strange glory here:

Although Swinton's Doctor Strange character already made headlines, and faced backlash due to the controversy over the fact that the Ancient One in the comics is an Asian male as opposed to a white woman, there may still be some people who are asking who is this Ancient One? As the name suggests, the character is over 500 years old and was born in a hidden city in the Himalayas. As a child, he was trained in magic by the powerful Kaluu, who eventually turned evil. The Ancient One tried to protect his village from Kaluu, and, once Kaluu left for another dimension, the Ancient One continued his studies in magic and became the most powerful sorcerer and focused on defeating evil. Before taking on Doctor Strange as a pupil, the Ancient One also trained Baron Mordo as a successor, portrayed by Chiwetel Ejiofor in the film. And fair warning: Mordo isn't such a nice guy.

Despite the mystical factors, the relationship between the Ancient One and Strange in the trailer is slightly reminiscent of what comic fans have seen on big screens before between DC Comic's Batman and Ra's al Ghul in Batman Begins. Yet, don't expect the Ancient One to turn into a villain for Doctor Strange like Ra's al Ghul did for Batman, since Swinton's character appears to just be a teacher in this Doctor Strange origin story.

Now go back and watch the trailer again and again, since you'll probably need to do that to even start comprehending the mystical world of the Ancient One and Doctor Strange. Then forget everything you think you know and get pumped for November 4, 2016.