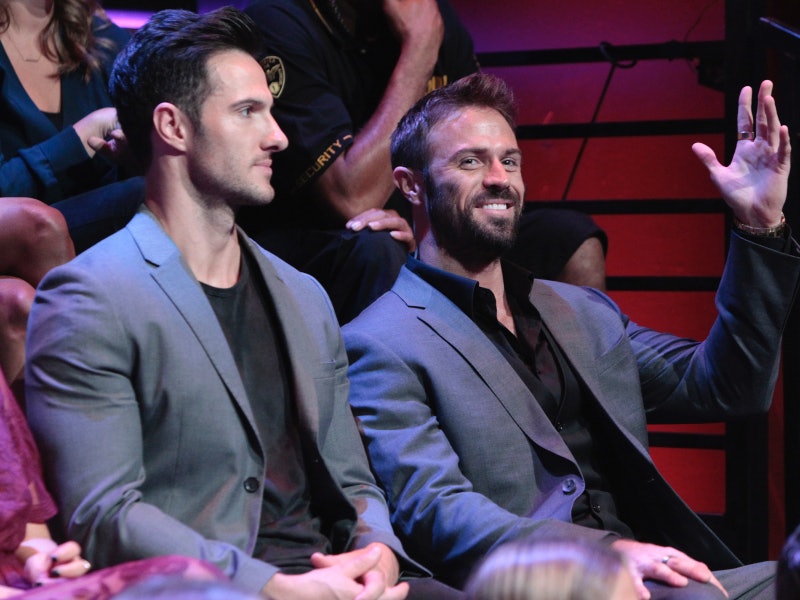 As Evan astutely observed during the Season 3 premiere of Bachelor in Paradise, "Where there's a Daniel, a Chad is not far behind." However, when you consider Chad got kicked off the series by Chris Harrison in the first episode, are Chad and Daniel still friends after Bachelor in Paradise? Their reunion on Bachelor in Paradise was the sweetest moment of the entire premiere (in its own special, sexist way), but JoJo's two suitors from The Bachelorette didn't end the episode on great terms. So did Bachelor in Paradise mark the end of this Chaniel bromance? Say it ain't so!

While Chad hit it off with — and was hit by — Lace, the first person he set eyes on was Daniel. The Canadian was Chad's sole ally in the house during JoJo's season of The Bachelorette and the workout buddies were genuinely pumped to have each other in Paradise. With their shared love of fitness and protein combined with their problematic views toward women, these guys seemed like a match made in heaven — truly a rarity for the reality TV franchise. Yet, their joy was short-lived when Chad started using offensive language toward the women on Bachelor in Paradise, specifically Lace and Sarah, and became belligerently drunk. Daniel approached him about how his behavior was scaring the people in Paradise and Chad got physically violent by pushing his number one bud from The Bachelorette.

Just like on The Bachelorette, Daniel was balancing that fine line on Bachelor in Paradise of maintaining a good friendship with Chad while advising him that his actions were alienating everyone else. Of course, his advice is always utter nonsense, with perhaps a tinge of understated brilliance (never forget that Hitler-Mussolini pep talk), and this time around he told Chad that he had a better shot at making out with a turtle than kissing Lace again — or any other woman for that matter — on his first night in Paradise. This enraged Chad and that's when the pushing happened.

While Daniel attempted to distance himself from Chad for the rest of the episode, I should note that when Chad started getting physical with Daniel, Daniel had a grin on his face for part of it. Daniel might have been all "unmurdery," which pissed the drunk Chad off, but it didn't appear that Daniel was too upset with his intoxicated pal. Yet, Daniel did say he'd punch his friend (he's done it before and he'll do it again, you guys) and in the preview for the next episode, Daniel was shown calling Chad an expletive. Of course, this could be some tricky editing on the part of Bachelor in Paradise and Daniel could not be talking about Chad, but it's not a good sign for their friendship regardless.

As for their time off of Bachelor in Paradise, the best way to check the status of their friendship is to look at their social media pages. Chad has a huge Twitter following and I went through his tweets and his Instagram page and saw no real mentions of Daniel — except when he posted a video of the aforementioned Hitler discussion from The Bachelorette. So Chad's social media does not indicate an offscreen friendship with Daniel and frankly, neither does the Canadian's since Daniel tweeted about the first Bachelor in Paradise episode and wrote, "Holy f*ck!!! Funniest episode ever. The downfall of Chad!"

Although Daniel's "downfall of Chad" comment was pretty accurate, that's not a very nice sentiment to have about a real friend. That makes me inclined to think that their friendship was one of convenience when they were on the Bachelor shows together. Another hint that this relationship is purely for TV? Daniel also shared the Hitler video on Instagram and his caption hints at the fact that he was aware he was creating reality TV gold with his comments.

I am not saying that these guys didn't genuinely enjoy their time on TV together, but their social media accounts make it seem that there is no love lost between these bros. And though they were seated next to each other during After the Final Rose on Aug. 1, they were there to promote Bachelor in Paradise. Yet again, that doesn't mean they don't like each other, I just am not sure the friendship expands beyond the realm of Bachelor Nation.

Like Carly said, Chad and Daniel were the first couple to hit it off during Bachelor in Paradise, but with Chad's eviction, their bonding time on the series is over. And that's not good news for people who fell in love with this duo during their time on The Bachelorette.

So soak in the remaining screen time these two will share together when Hurricane Chad returns on Aug. 8's episode of Bachelor in Paradise, because it's most likely an end to a brotastic era.