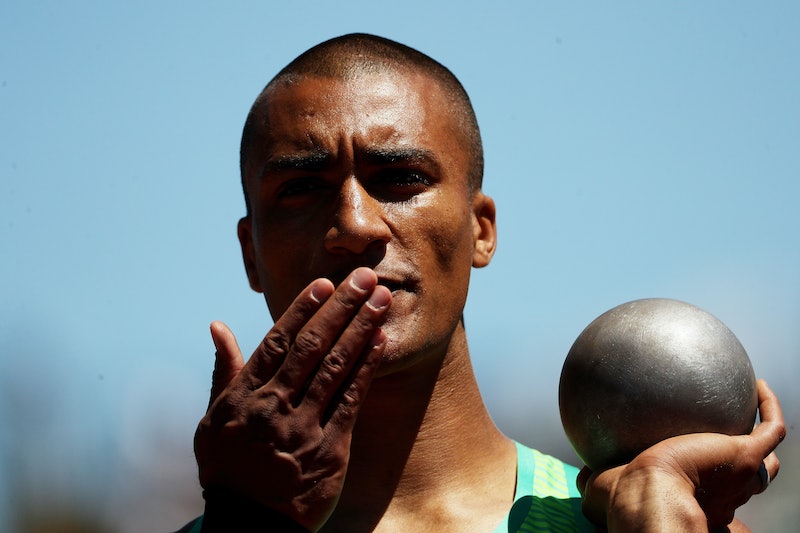 Are you crushing hard on Ashton Eaton? Of course you are. The Olympian is not only gorgeous, but pretty much good at everything — he especially dominates when it comes to track and field. Yet sorry, guys: Ashton Eaton is not single. Not only is the athlete married, his relationship is with his fellow Olympian Brianne Theisen-Eaton, who holds the Canadian records for the heptathlon and the indoor pentathlon. She's also the only Canadian woman who has ever stood on the podium as a winner in multi-events. In other words, she's a very big deal.

The duo first met at The University of Oregon, where they developed a mutual love of sports and each other. They said their "I dos" back in 2013 and became an Olympic couple who happen to represent two different countries. Theisen-Eaton is at the 2016 Olympics representing Team Canada in the heptathlon, and Eaton is representing Team USA in the decathlon.

Yet while they are not on the same Olympic team, the couple make for one seriously adorable real life team. They train together and are constantly pushing each other to do their very best. They also just happen to make commercials together that reach cuteness levels the likes of which the world has never seen before.

The athletes are total champs both on and off the field. While they both hold records and have an impressive amount of medals to their respective names, they have also worked hard to build a life together. The fact that they share so many interests and talents has to help. The couple that goes to the Olympics together, stays together, right?

So no, Eaton is definitely not single. He and Theisen-Eaton are a package deal — a two country couple that root for each, challenge each other, and post sweet selfies together on Twitter. They are total relationship goals, and your new favorite real life Olympic ship.

More like this
Jake Daniels Just Became The UK’s First Active Football Player To Come Out As Gay Since 1990
By Sam Ramsden
What Is Jeanie Buss' Net Worth? The Lakers President Is Uber Rich
By Hugh McIntyre
Love Of Huns' Definitive Guide To A Seminal BRIT Awards Moment
By El Hunt
Kaley Cuoco & Tom Pelphrey Just Made Their First Public Appearance As A Couple
By Hugh McIntyre
Get Even More From Bustle — Sign Up For The Newsletter