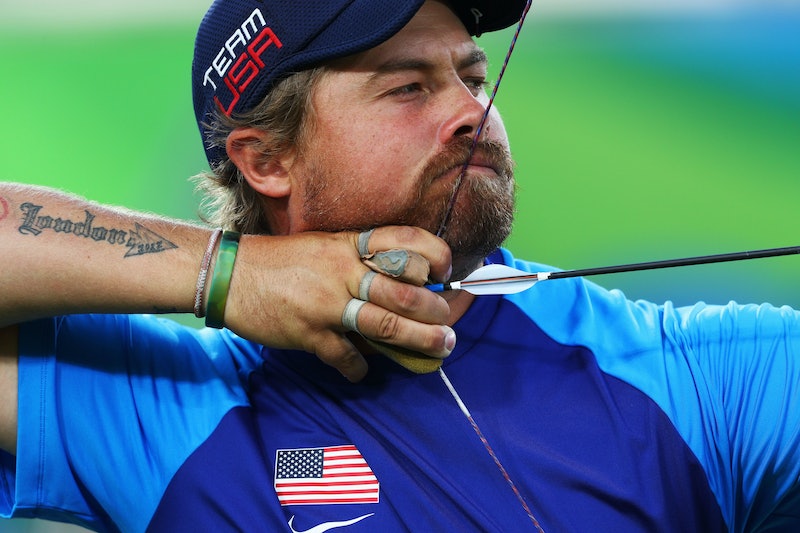 In early 2016, Leonardo DiCaprio finally won an Oscar for Best Actor, an award that had been eluding him throughout his prolific career. And now that he's achieved that ultimate Hollywood goal, Twitter seems to think that the actor is chasing after more gold — in archery at the Olympics in Rio de Janeiro. Yes, really: there's an uncanny Leo doppelganger in the world, competing for medals at the Olympics. Twitter has named Team U.S.A. archer Brady Ellison as DiCaprio's Olympics lookalike and it's so spot-on — I seriously had to do a double take when I first saw a photo of the bearded archer, who looks just like the actor.

But no, Ellison is not DiCaprio's Olympic alter ego name or undercover archery identity. Ellison is a 27-year-old archer from Arizon and three-time Olympian. He won a silver medal with Team U.S.A. on Saturday, with South Korea's team outshooting them to win gold, reported NBC 12News. Ellison will next compete on Aug. 9 in the individual archery competition, where he aims to take home a gold medal. The games mean so much to the archer that they are even etched on his arm — he has a tattoo of the Olympic rings that are visible as he competes, according to the San Diego Union Tribune. Clearly, he's ready to win big. “There are other ways to have a great career,” he told the newspaper. “But this is our moment. The Olympics are the big one.”

You could say that the Olympics are Ellison's Oscars. But even though DiCaprio and Ellison are two different men with two different careers who chase two different gold awards, Twitter has already dubbed Ellison as Leo's twin, doppelganger, and even the actor's secret athletic identity.

All jokes aside, some enterprising Twitter users have realized that this could be a new opportunity for both DiCaprio and Ellison: a movie, perhaps?

Based on the the resemblance, I think that idea could be worth gold.