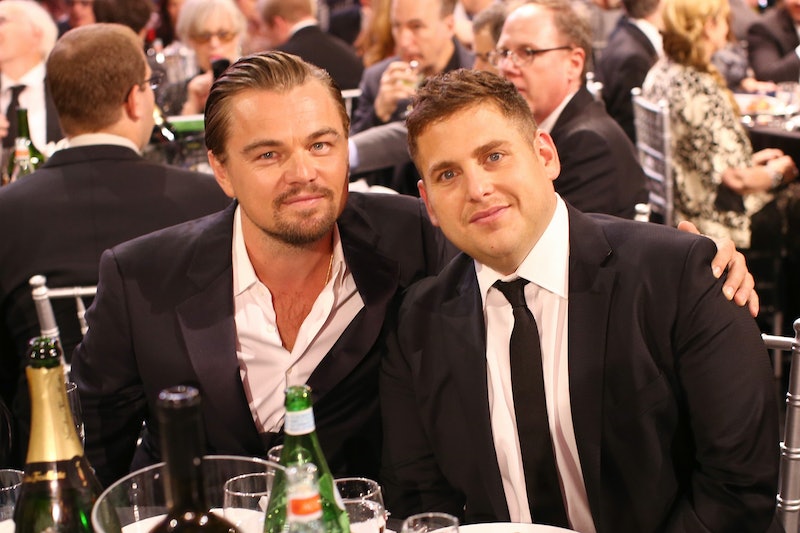 Forget about Leo's Oscar win, all of the models he dates, and the fact that he is a huge movie star, because it's time to focus on how Leonardo DiCaprio is the most entertaining celebrity in real life. Yeah, he can slay it on the big screen, but the same also goes for anytime the 41-year-old talent does anything normal as a human being. For example, on Monday, Leonardo DiCaprio scared Jonah Hill. That's right, it appears Hill was waiting outside of a restaurant for his Wolf of Wall Street co-star when DiCaprio came out of nowhere and made him jump out of fright.

As you can watch below (yes, there is glorious video footage), Hill is just chilling on the streets of New York City, when DiCaprio sneaks up on him. What makes the moment so fantastic is The Revenant star spots Hill, runs towards him with his phone out like a crazed fan or the paparazzi, and all with a drink (is that a vodka cranberry?) in hand. The Oscar-winner's talents never cease to amaze me.

It took a moment for the 22 Jump Street actor to realize what exactly was happening, but after recognizing DiCaprio, he laughed and the two hugged it out. To be clear, this wasn't a short hug, but one that lasted for quite a while. If you're a Friends fan, it was along the lines of a Chandler and Joey hug.

DiCaprio's encounter with Hill can be added to his already long list of everyday greatness. Whether the Titanic star is hiding behind random objects, dancing at Coachella, or just walking down the street, he is a true gift to this world.

Seriously, I would be content watching him do the most mundane, normal things. Actually, I think I'd prefer that over his movies. Yep, I said it.