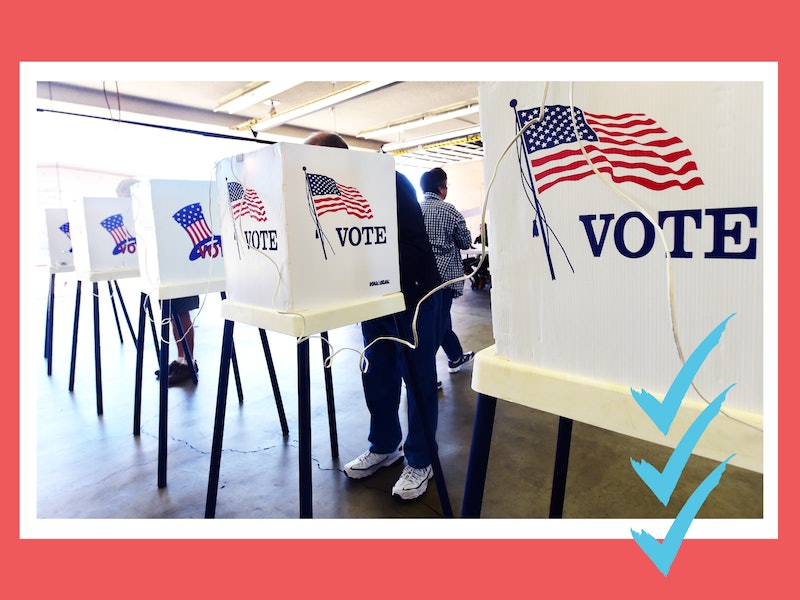 It's been a whirlwind of an election season, but the fun's not over yet; there's still a lot of voting to do, so make sure you don't fall behind on this year's election schedules — because your vote really does matter. Sadly enough, the U.S. has some pretty horrendous voter turnout rates. Out of the 35 countries in the Organization for Economic Cooperation and Development, most of which are developed and democratic nations very similar to ours, we rank 31st in terms of how many of our eligible voters show up to the polls. Ouch.

One of the problems is that in the U.S., we focus so much on the presidential election that we tend to forget about all the other elections. For example, according to a Pew Research Center study, one in every six Americans who said they "definitely voted" in the 2014 mid-term elections never had any record of doing so. Then there are the local polls, which many of us neglect completely — yet that's where our individual vote can make the biggest splash. While the presidential election comes around only every four years, you have a chance to vote at the local level every single year, and that's really where we should be putting our attention.

Here are five reasons you should vote at a local level.

1. Local Policies Affect You On A Daily Basis

From income taxes to reproductive rights to education reform, most of the issues that affect your day-to-day life are decided at the local level. Take Florida, for instance; last year, Governor Rick Scott put a law into effect saying that women in the state seeking to terminate a pregnancy have to consult with a doctor and then wait at least 24 hours before they can actually have the procedure. As you can imagine, this law put many women in a very difficult position, making it nearly impossible for them to receive the care they very much need because of where they happen to live or the kind of jobs they have.

A law like this has nothing to do with the federal government or who was in the Oval Office at the time. It's all about who was elected locally — so you want to make sure you've done everything you can get to someone in office who you believe will make decisions that are going to best suit the specific needs of people in your area. As much as you'd like President Obama to, say, increase funding for education or challenge regional spending, presidents have no say over whether local public schools get more funding, how your city's financial plans are run, or what kind of abortion laws are put into effect in your state.

2. You Have The Chance To Influence The Policy-Making Decisions You're Most Passionate About

There are plenty of issues you probably really care about that you can have a say in if you vote locally. For example, there are numerous states making marijuana reform a big issue to watch out for in the local voting game. In Massachusetts this November, you'll be able to vote for an initiative that regulates and taxes weed just like the state does alcohol. Similarly, a campaign in California called the Adult Use of Marijuana Act (AUMA) has gathered enough signatures to put marijuana reform on the local ballot this year as well. If they vote in favor, Californians will be able to have up to six marijuana plants and possess up to an ounce of the marijuana flower. If this is an issue that's important to you, you'll want to make sure that you get out and vote.

And if you're looking for a lesson about what can happen when people don't come out locally to vote for issues they're passionate about, know that last year in Houston, Texas, Proposition 1 — also called Houston Equal Rights Ordinance — was brought before the electorate. It was a non-discrimination ordinance that would have protected people from discrimination based on "sexual orientation, gender identity, sex, race, color, ethnicity, national origin, age, religion, disability, pregnancy, genetic information, family, marital, and military status," and it received a lot of positive national attention in the media. Those in support of the proposition also raised much more money than those who were against it. Those voting "no" on the bill focused on aspects like the fact that the bill allowed transgender individuals to use bathrooms consistent with their gender — one tagline used by those against the proposition was, "No men in women's bathrooms."

But only 8.2 percent of the voters who came out were 30 and under — while 43.2 percent were 61 or older, meaning that the views of only one specific demographic, rather than Houstonians of all ages, were represented at the ballot box. As a result, the proposition was struck down, and certain kinds of discrimination — including bathroom-based discrimination against transgender people — remained legal in the city.

If issues like this mean something to you, get to the local polls and fight to end discrimination like this once and for all.

3. Most Local Elections Are Decided By A Margin

Okay, so it's not likely that you'll see local elections determined by a single vote, but, still, the margins are much closer on the local level than they are at the national. For example, in 2010, a tax levy vote in Ohio was passed by only two votes, and in Mississippi last year, the Democrat incumbent Blaine Eaton won re-election because he drew the long straw over Republican Mark Tullos — because the votes came out as a tie.

In general, much fewer people vote on the local level than they do at the national. Only 21 percent of eligible voters in 144 U.S. cities cast a vote in local elections in 2011. In other words, less than a fifth of the population had any say over who was leading their city politically. Millennials are particularly bad at getting to the local polls, though. In 2009, only 10 percent of local voters in Virginia were millennials. This rang true for the rest of the country as well; while most millennials came out swinging for the 2012 presidential elections, hardly any of them came out to play at the local elections.

That means your vote has even more power locally than it does at the federal level. You really could be the deciding factor when it comes to important issues that affect you, your friends and family, and your neighbors.

4. Voting In Non-Presidential Elections Is Not As Confusing As You Might Think

Hank Green, the co-founder of the YouTube channel Vlogbrothers, posted a series of videos this month explaining how to vote in every state. He says a lot of us don't make it to the polls because voting at the local level "might be a little complicated." It's different in every state and it's just one of those things we're generally not taught at school, so it's not uncommon for us to simply have no idea how to vote.

But with just a minimal amount of research, you can begin to understand how to register, how to get a sample ballot, where the polling places are, and how to actually vote locally, all of which will help you evoke change in the long run.

So many of us fail to use our democratic rights, so much so that we may as well not have them. Think about the world you want to live in. Imagine what kind of laws you want passed and what kind of policies you want to see squashed. Chances are, you have a real shot at making all that happen if you stay plugged into what's going on in your city, your county, and your state. So get out there and vote!

Bustle has partnered with MTV’s Elect This to spotlight ways to vote locally this election cycle. To get registered and find out more about the issues you’re voting to elect in the 2016 election, visit electthis.com.