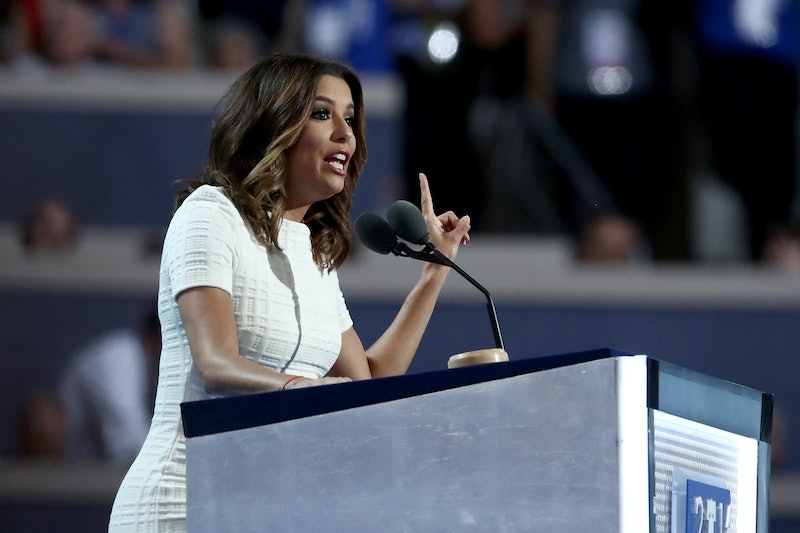 In an election as controversial and unique as this year's, it's inevitable that celebrities and public figures will come to the forefront of media to voice their opinions on the candidates. For Eva Longoria, though, the 2016 presidential election isn't her first time being outspoken about politics and human rights issues. As not only an actress, but a passionate activist and philanthropist with dozens of projects up her sleeves (including a collection with The Limited), Longoria is an incredibly busy woman — and she believes this year's election is particularly important for our country. And she's not being quiet about it. Longoria recently spoke at the Democratic National Convention in Philadelphia and has been passionate and public in her support of Hillary Clinton as the most qualified candidate for president in the race. I spoke to Longoria about her appearance at the DNC, as well as why it's so important for women to be part of this year's election.

"I think it's important for all Americans to vote," Longoria says. "But I do think there's been so many disenfranchised groups in the past that have not been able to vote ... women being one of those groups, minorities being the other of those groups — when you think of all the people who have fought so hard, who have came before you, who were born before you, who died for the right to vote, it's our obligation to honor all of those people whose shoulders we stand on."

While voting may seem like a commonplace, everyday right in today's world, the fact of the matter is that, as of this election, many states are making it even more difficult. According to the Brennan Center, a photo ID is required to vote in states like Texas, and Kansas requires proof of citizenship in addition to a photo ID — both laws that didn't go into effect into 2014. While these type of restrictions can make voting even more difficult than it needs to be, they are nothing compared to what minorities and other groups have had to overcome in the past in order to vote. This history is all the more reason to cast your ballot this November if you're fully able.

And if you think that your vote won't matter, because everyone else is voting anyway, you'd be wrong. According to BipartisanPolicy.org, only 57.5 percent of eligible citizens voted in the 2012 election — a percentage that was down from that of the 2008 election. We simply can't afford to have that number go down again when, as Longoria emphasizes, this election means so much to so many groups — especially women.

"The stakes are very high. There are so many policies [and] proposals from both sides that are really going to affect women in a way — some good, some bad," Longoria says, "so, you have to be involved in these decisions."

Longoria's thoughts were echoed in her DNC speech, which didn't shy away from calling out Trump on his often racist and sexist remarks and highlighting her respect and admiration for Clinton as "the most qualified candidate for president, ever."

"I'm really excited about the agenda and platform that we have in store for America," says Longoria.

There's no doubt Longoria will continue to be a loud and passionate voice for the Democratic party throughout this election and a big supporter in Clinton's corner.

And with so much bipartisan as well as in-party division present in this election — for example, Bernie supporters saying they won't vote for Hillary or anyone else, after all — Longoria's thoughts on the importance of voting are particularly important now. Whether the "perfect" candidate for you exists in this election or not, it is our responsibility to, as Longoria says, honor those who came before us — those who fought hard for every single one of us to have an equal voice and a say in these elections. Regardless of whether you stand with Eva in her support of Hillary or not, her reminder on the significance of voting is universally crucial.