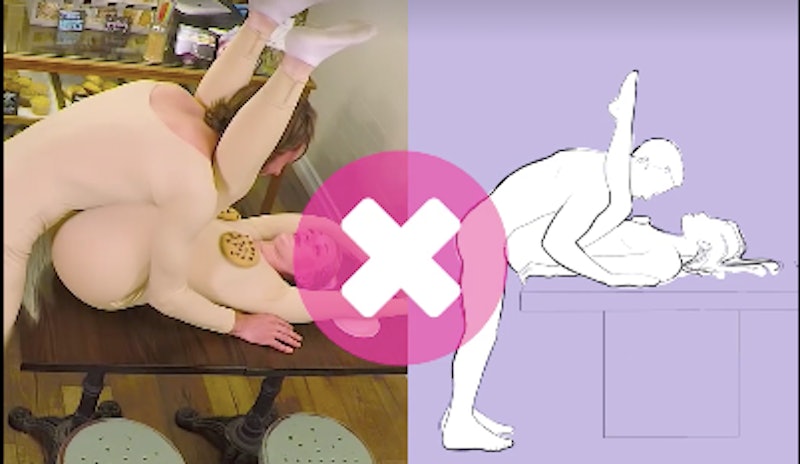 As far as exciting and new sex positions, we've really lost the plot with this one. Cosmopolitan has released the best sex positions for eating cookies. As a thing. That exists in this world. A bunch of sex positions that involve eating cookies. And although I know it's done jokingly, part of me is the happiest woman in the world at the idea of these things being combined. Because as Cosmopolitan says, "If there are two things in this world we can agree are both fantastic, they're cookies and boobs." Seriously, I would get that tattooed on my soul if I could.

I mean, they didn't even try to come up with a pun or anything for this one. They just went with "Cookie Boobs." You literally put those cookies on your boobs and enjoy. I don't know why they said this doesn't work — if I were him I would be a happy fella indeed.

OK, this one shouldn't be so hard be because basically you're just Lady-and-The-Tramp-ing a cookie while lying on top of your partner. But it's obviously become too much because she's gone all splat — and now it looks like a choking hazard.

Something about her eating food out of his hand in that position just looks wrong. It's like the "doggy" part of doggy style became a little too literal. I don't like it. Plus, that's the position women are always secretly checking their phones in and stuff anyway. We don't need a cookie on top of it all.

So the idea in this one is that you both balance cookies on your neck and sort of gently nibble them off of one another while you do it, somehow magically not disrupting the cookie balance. I'm not convinced. Also, who nibbles a cookie? You bite that sh*t.

This is basically what a bride and groom do with wedding cake, I guess you could do this at your wedding if you didn't mind everyone you've ever met watching you have sex during the first dance... Maybe just stick with the cake thing, actually.