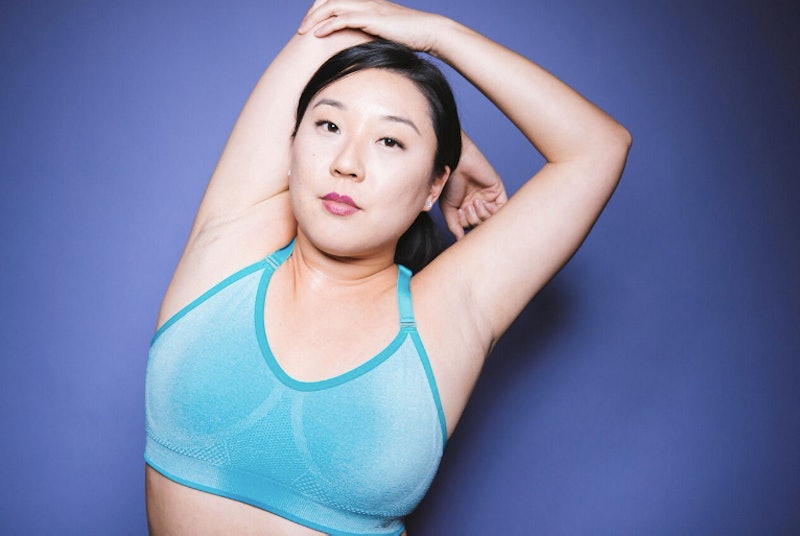 Hips, hips, hooray! According to a new study presented at the American Psychological Association's 124th Annual Convention, women are more accepting of their bodies now than they have been in the last 31 years. The study, conducted by Bryan Karazsia, PhD, of The College of Wooster, analyzed data from over 250 studies conducted between 1981 and 2012, which included data from 100,228 participants. Each study in the meta-analysis concerned how women felt about their bodies — in particular, how they felt about their weight.

"While women consistently report being more dissatisfied with their bodies than men as far as thinness is concerned, that dissatisfaction has decreased over the 31-year period we studied," said Karazsia.

Karazsia explained that the research suggests that body dissatisfaction began to rise particularly in the early '90s, as well as the threat it posed. Both men and women who experience body dissatisfaction are more likely to develop eating disorders like anorexia nervosa, bulimia, and binge-eating disorder, as well as experience anxiety and depression. As for the early '90s, it isn't all that surprising that would be when the threat became more apparent — although societally we had moved away from icons like Twiggy, the era ushered in icons like Kate Moss and a lot women in the spotlight idealized for their thinness. "It makes me feel powerful to be hungry," Ivana Trump famously said to reporters in 1986 — a skewed sentiment that seems to have leaked into early '90s culture and beyond.

But since then, we've come to slowly but surely recognize the hazards of this kind of mentality, and the dangerous effects they can have on a person's mental and physical health. Whereas BMI, or body mass index, was once heralded as an accurate measure of health, people are starting to respect and understand that healthy bodies do not only fall into a certain weight range. More often prominent names in fitness strive for strength rather than striving for or even mentioning weight loss to their audiences. The body positive movement in particular has made great strides in changing the damaging notion that thinness is always good and fatness is always bad.

"The last two decades have witnessed increasing attention and awareness on a body acceptance movement aimed primarily at girls and women," said Karazsia. And indeed, we're seeing more body types represented in the media now than ever before — not nearly enough, of course, but hopefully more with this trend on the upswing.