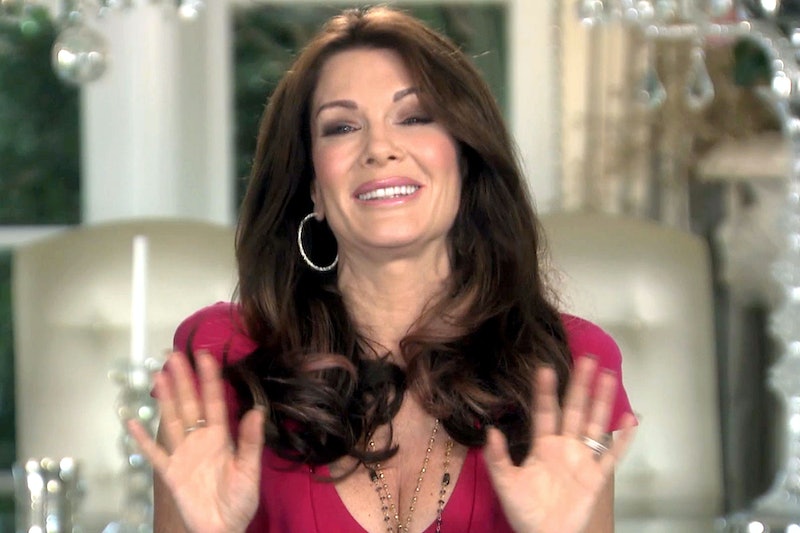 When it comes to speaking her mind and being saucy while doing so, Lisa Vanderpump is the best on both Real Housewives of Beverly Hills and Vanderpump Rules. The SUR owner rarely holds back her opinion nor worries about hurting other peoples' feelings, especially when it comes to defending herself or where she stands regarding a situation. So, why not compile some of the best Lisa Vanderpump quotes ever? It's only fitting that the reality queen be recognized for her amazing way with words.

Whether you consider yourself a fan of LVP's or agree with some of her fellow Bravo co-stars about her so-called manipulation, it's hard to argue with the fact that Lisa can be pretty fantastic when it comes to expressing herself. If you're a Bravo fan, I guarantee there is at least one quote from the animal activist you can recall from either RHOBH or Pump Rules. Yes, that's how memorable she truly is. Plus, who doesn't like to practice their best British accent, all while quoting Lisa? Don't worry about being embarrassed, you're certainly not the only one who does it.

Lisa continues to prove just how worthy she is of being on reality TV. Can you imagine if she ever quit RHOBH? It'd be a travesty, for sure. But let's not worry about that and focus instead on honoring LVP by showcasing some of her best quotes.

When She Created Her Season 6 Tagline

Her best tagline yet.

When She Told Off Stassi

Basically what every Pump Rules viewer has wanted to say to Stassi Schroeder since day one.

When She Handled Her SUR Staff

When She Wanted The Right Welcome

When I walk into my home, I'd also like a glass of vodka waiting.

When Ken Did Something Worthy Of Sex

When She Knew She Won

When She Gave Her Emmy Speech

When She Admitted Her Love Of Wine

When She Finally Fired Kristen

It was a great day at SUR when Kristen Doute finally got fired.

When She Didn't Baby Jax

When She Apologized, But Not Really

When She Threw Major Shade

When She Doesn't Utter One Word

Sometimes she doesn't even need to speak to get her point across.

More like this
‘RHOBH’ Newcomer Sheree Zampino Is Still Close To Ex-Husband Will Smith
By Brad Witter
Everything To Know About 'RHONJ' Season 13
By Brad Witter
Kim Kardashian Remembers Her Last Words To Death Row Victim Brandon Bernard
By Jake Viswanath
Scott Disick’s First Time Around Kravis Was “Awkward,” To Say The Least
By Jake Viswanath
Get Even More From Bustle — Sign Up For The Newsletter