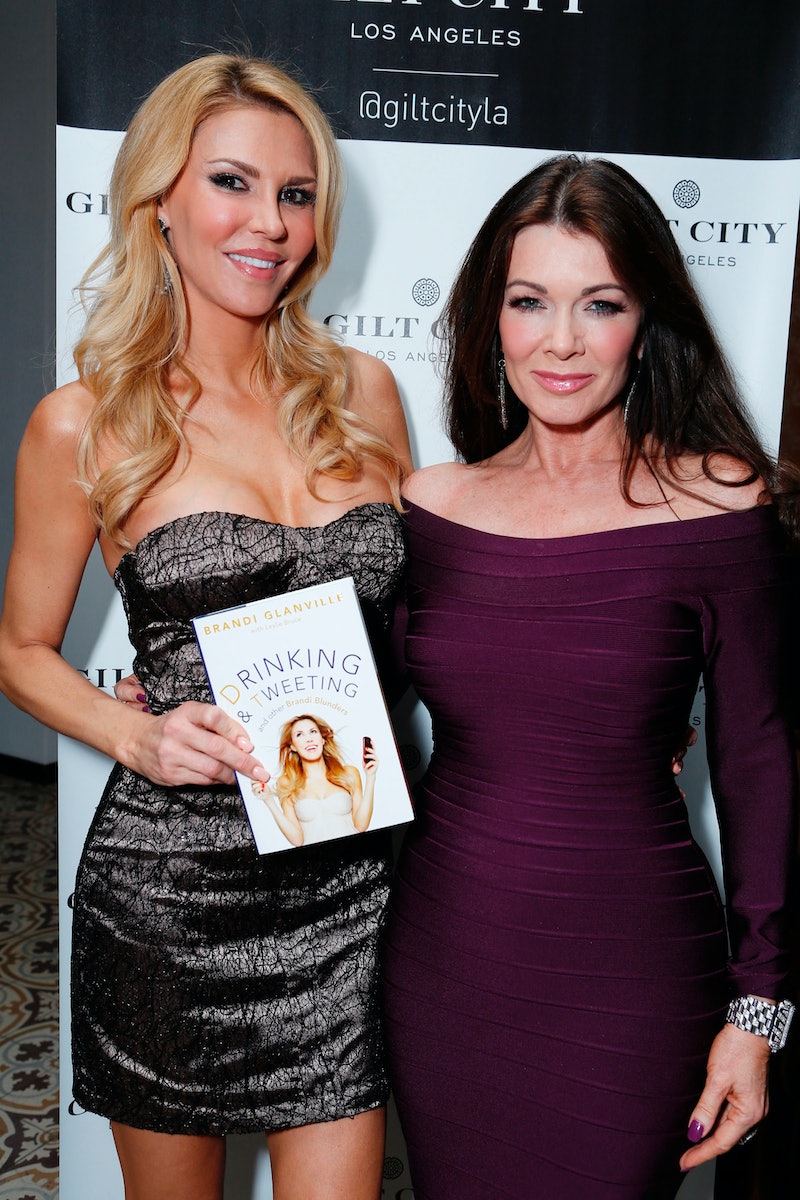 There's no doubt that Real Housewives of Beverly Hills Season 6 was extremely intense, especially when it came to Yolanda Hadid's Lyme disease battle and Lisa Vanderpump and Lisa Rinna hashing it out about LVP's so-called manipulation of others. I know fans have their own thoughts and feelings about it all and guess what? So does a former Housewife. While chatting with Bustle about Season 6, Brandi Glanville reveals her thoughts on that Munchausen conversation and the immense amounts of drama Vanderpump found herself in throughout the season.

"I was actually super upset," Glanville says about the word Munchausen being brought up in relation to her good friend Hadid's illness. For those in need of a brief refresher, Rinna brought up to Kyle Richards and Vanderpump how some people were accusing Hadid of having Munchausen syndrome, which is when an individual feigns an illness to garner sympathy. At that time of the conversation, Rinna never accused Hadid of having Munchausen, but discussed what she had heard. She ended up feeling guilty for it and also apologized to Hadid.

As for Glanville, she's beyond mad at the other women for even discussing it and feels for her friend. The Famously Single star says passionately,

I know Yo so well and love her. She’s been struggling with this for years, so why now are they bringing this up? We’ve seen the struggle. The struggle is real. Her hanging out outside of the show, none of the other ladies hang out with her outside of the show, except for possibly Erika [Girardi] now. They didn't see her going through her treatments. They didn't see when she couldn't move out of bed. For them to go after someone who's sick? ... Why go after somebody who is weak, already? I just feel like these women are bullies.

Not only does the mere mention of Munchausen bother Glanville, but the fact that it will follow Hadid infuriates her even more. She elaborates,

I was just so mad, because someone who is sick doesn't need the world questioning whether she's sick now. That conversation will never go away, so it's forever going to be part of her story. It's not OK. It's not fair. It's not fair to her. It's really insensitive and that's what they are. They don't want to talk about themselves, so they talk about the person who's going through the most, the hardest time. It's like talk about your own sh*t ladies, we all know you have it.

In addition to finding issue with Hadid's treatment by the other ladies, Glanville also has some opinions about Rinna claiming Vanderpump told her to bring up Munchausen for a more interesting story line and all of the other drama between the two of them, including that other conversation with Richards, where she admitted LVP tried to pull her into the Munchausen drama.

Actually, Glanville's thankful for Rinna and says, "You know, the Lisas drive me nuts. I feel like, thank God for Lisa Rinna being so crazy, otherwise they wouldn't have had a season." However, that doesn't mean she isn't irritated with Rinna, too.

Then, at the same time, it's like she's always saying, "own your sh*t, own your sh*t," but she is the person that said it in the first place. So, own your sh*t! Yes, we all know that Vanderpump, as they call her, is very manipulative and she lies. I've know that forever. We've all known that. So, now that you've brought up the conversation, own that you brought it up.

Brandi continues, "It's frustrating and I do know Vanderpump is manipulative and definitely was a part of it for sure, but you have to own up to the fact that the audience saw you say it. That's all we saw. It's sad."

If you were to ask LVP, she doesn't see herself as a manipulator. In a March 2016 Bravo blog, she reflected on confronting Girardi about her conversation with Kathryn Edwards, where they discussed LVP's ability to spin webs. If you recall, Rinna came to Vanderpump's defense and Eileen Davidson read that as Rinna once again being manipulated by LVP. "Where is the manipulation?" Vanderpump wrote in her blog. "I viewed Rinna speaking in my defense. Eileen obviously wasn't happy with her response, so we will see what transpires in relation to that." Furthermore, at the latest RHOBH reunion, after Rinna claimed Vanderpump manipulated the Munchausen conversation, LVP didn't cop to it, nor did she really comment.

Maybe Glanville should count herself lucky for not being part of Season 6 in a full-time capacity. She definitely avoided a bulk of the controversy, which is also why she chose to film her segment for the reunion from home.

After Bravo asked her to do the reunion, Glanville knew she didn't want to be in the same room as the other RHOBH women. She admits,

I didn't want to go sit on the couch with the ladies. I felt like they talked enough about me over the season, so why would I sit there and have a firing squad against me and have them all come at me? What would I gain from that? So, it was just kind of like, I'll do this on my terms, at my house with a glass of wine and nobody talking back to me.

Can you blame her?