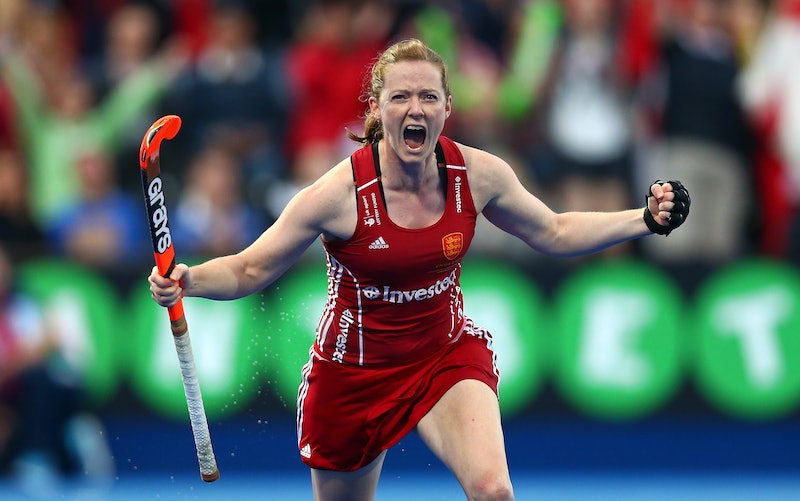 Every four years, we are blessed with the Summer Olympics, which brings some of the best athletes in the world together to a single city. As someone with zero athletic ability who can't possibly get on Leslie Jones' level when it comes to Olympics enthusiasm, I've never been anywhere near an Olympic Village, but that doesn't stop me from wondering about what all of those Olympians are doing when they aren't competing. Are they sleeping? Are they training for their next event? Are they eating their weight in food? Or, are they embracing what must be the most athletic and intense dating pool on the planet — are Olympic athletes hooking up with each other?

Olympic athletes are just like any other famous people, they have an incredible talent and, in true celebrity fashion, they also tend to stick together. Plus, staying together in the Olympic Village makes it easy to meet other singles. So, why wouldn't they be getting it on when they're all getting together in Rio?

But, that's not where the story ends. How much sex are Olympic athletes having? Who are they having it with? How are they deciding who to hook up with? There are so many questions, and luckily, I have the answers. Here's everything we know about sex and dating at the Olympics.

1. Olympic Athletes Are On Tinder (And It's Next Level)

Tinder has already seen a 129 percent increase in matches on the dating app in the Olympic Village area since the Olympics began. The spark in swiping doesn't come as much of a surprise though, since the dating service was already a huge hit at the 2012 Sochi Olympics. American snowboarder Jamie Anderson told ESPN, "Tinder in the Olympic Village is next level," – which makes total sense considering the athletes' affinity for playing games.

Even your fave swimmer Ryan Lochte is on Tinder, so if you have Tinder Premium, now is a good time to use your Tinder Passport to swipe in Rio to see which athletes are trying to find an Olympic hookup.

2. The Olympic Village Has An Huge Supply Of Condoms

Olympians aren't the only ones breaking world records at the Olympics this year — there are 450,000 condoms being distributed at the Rio Olympics this summer, which is the highest amount of condoms ever given out in the Olympic Village. If you do the math, you'll find that it comes out to 42 condoms per athlete — and they're only there for two weeks. Each athlete would need to use a condom about three times every single day to use up their share.

But, that amount of condoms apparently isn't enough to the appease the Brazilian government's worries about the athletes practicing safe sex, so they're distributing an additional nine million condoms throughout Rio during the Olympics. (New Olympic event idea: drain the pool and fill it with millions of condoms. Good luck winning in that race, Michael Phelps!)

3. Athletes Are Getting Down

According to American soccer player Hope Solo, the Olympic Village is full of athletes hooking up. The Olympian told ESPN, "With a once-in-a-lifetime experience, you want to build memories, whether it's sexual, partying or on the field. I've seen people having sex right out in the open. On the grass, between buildings, people are getting down and dirty." So, apparently that ban on outdoor sex placed during the Seoul 1988 Games was more of a light suggestion.

British diver Tom Daley pointed out the exact reason why Olympians can't get enough of each other in the Olympic Village. In an interview with British GQ, Daley said, "You've got hundreds of athletes crammed into student accommodation. They are in peak physical condition and have been locked away training for months. Talk about a need for a release."

TBH, if you ever lived in a college dorm, then you know exactly what goes down when a bunch of young people share student housing – except at the Olympics, replace the freshman frat boys with super hot Olympians. Do you think it's too late for me to get a refund on my first year of college?

4. Sports Aren't The Only Thing They Take Seriously

Like their Olympic events, Olympians take their relationships very seriously. Not only are Olympians connecting with each other in the Olympic Village, but some even take their partnership all the way to the alter. British field hockey players Helen and Kate Richardson-Walsh don't just share a team, they shared wedding vows. The women are the first married gay couple to compete at the Olympics, which means that love is winning right alongside the Olympians in Rio.

While not every single Olympian is looking to get married, we definitely know that Olympic athletes are indeed hooking up with each other. So, if you have your eye on a specific Olympian, you have four years to become an elite athlete and get a ticket to Tokyo's Olympic Village in 2020. Good luck!