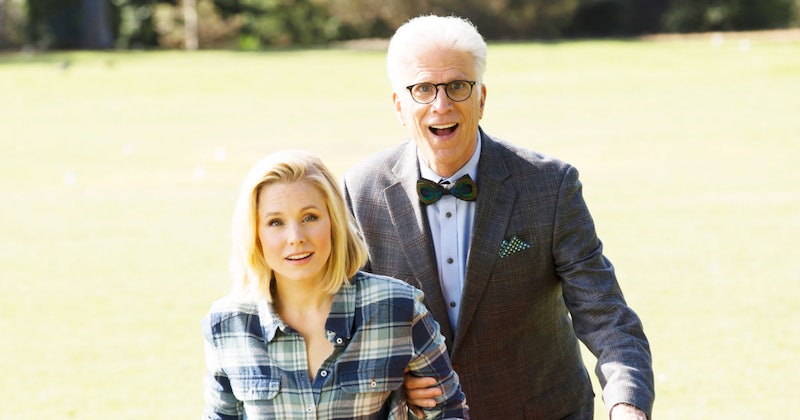 Olympic fever may be in the air right now, but soon there will be something else for everyone to get excited about: the premiere of the 2016 fall TV lineup. While there are a whole slew of great shows returning from last year, there are also a lot of new shows that should be on your radar in September. Even better, there are a lot of new shows debuting this fall that are women-centric. All of the shows on this list star women, which is a win for female TV watchers, but many of these shows were also created, written, directed, and/or produced by women.

This list is so necessary, especially when it appears that this TV season is not winning the gender wars. According to Uproxx, on early inspection, the fall 2016 TV lineup is lacking in female representation. Even the networks that manage to have shows about women — ABC has the best track record and continues that trend this fall — those shows are most often focused on white women. While these statistics are sad, this list is definitely for those TV watchers who want their fall 2016 TV lineup to be women-driven.

This new crop of shows will take you back in time with Blair Waldorf, show off Kristen Bell's funny side, and will give fans the best TV couple in Mandy Moore and Milo Ventimiglia. Of course, these are just three of the 17 shows I think you're going to want to watch. So, get your calendar ready, feminists; it's going to be a busy TV watching season.

This OWN original, created, directed, and executive produced by Ava DuVernay, focuses on two sisters, Nova Bordelon and Charley Bordelon, and their brother Ralph Angel, who inherit a sugarcane farm in Louisiana from their dad. These kids know nothing about farming and also have no idea why their dad would leave them with such a mysterious gift. But, over the course of the season, which has its two-night premiere Sept. 6 and 7, the Bordelon siblings, along with the audience, are about to find out. Besides having a co-sign from Oprah, this show should make female fans excited about the fact that every episode of the first season was directed by a woman.

Katie Otto (Katie Mixon) is a "bad" mom, who is trying to raise her three kids in a wealthy town of perfect families. She feels like she just can't live up to their standards, but her misfortune is good for TV watchers since this show, created by Sarah Dunn, is a funny look at the pressures of being a mom. It was originally called The Second Fattest Housewife in Westport, so, no, it's not your typical family sitcom — a good thing for any moms who hate green drinks and need a show that speaks to them.

Love Empire, but wish it featured more girl groups? Well, then, this is your show. The Empire spin-off, starring Queen Latifah, looks at three young female singers (newcomers Jude Demorest, Brittany O’Grady, and Ryan Destiny) as they try to navigate the music business in Atlanta. Of course, this show will be drama-filled, but there's no doubt it will also have a killer soundtrack, too. Think Dreamgirls with a hip-hop twist.

Fans of Parks and Recreation should be excited for this new Michael Schur comedy coming to NBC's Thursday lineup that deals with life after death. After Eleanor, played by Kristen Bell, realizes there's been a mix up at the pearly gates and she probably shouldn't be in the good place, she attempts to start a anew in the afterlife. Sure, this is a comedy, but, like all Schur's shows, there's bound to be a lot of heart, too.

Agent Carter may be gone, but Hayley Atwell is back in this ABC series, which has her playing a former first daughter who isn't living up to her family's presidential pedigree. She's a complicated character with a past to prove it. As the trailer makes clear, she's done some bad things (drug possession, sleeping with a student), and now she's going to have to do some good things to make up for it. Atwell's Hayes Morrison is blackmailed into working for the New York District Attorney to avoid jail time, where she'll be turning over wrongful convictions. Seems like Morrison is once again getting a chance to show what a good person she can be.

Leighton Meester (aka Blair Waldorf) returns to television in this time-traveling Fox comedy about two teachers, Adam Pally and Yassir Lester, who go back to colonial America and realize the revolution hasn't started. Turns out, they've got to be the ones to get the ball rolling. While it's clear this one will be funny — it does star The Mindy Project and Happy Endings' funny guy Pally, after all — I can't wait to see what Meester, playing a woman of the 1700s, will be wearing in this one. Despite the fact that it likely won't make Blair jealous in any way.

This is 10-episode miniseries looks at the aftermath of a racially charged police shooting that rocked a small Tennessee town. Sanaa Latham is sent in to investigate the shooting of a white teen by an African-American cop and find out what really happened that day. Clearly, the story is very timely. The trailer even starts with someone saying that they don't want "another Ferguson" on their hands. This show also offers up a conversation on race relations in the U.S., which definitely isn't a bad thing.

It's Always Sunny In Philadelphia's Kaitlin Olson is going off on her own in this new Fox show where she plays Mackenzie "The Mick" Murphy, a hustler with little money and even fewer responsibilities. That is, until she's left raising her sister's three kids after they flee the country to avoid criminal charges. Hilarity will likely ensue and lessons will be learned on this foulmouthed sitcom with a heart.

ABC is adding another family sitcom to its already stellar lineup of family sitcoms — Fresh Off The Boat, Black-ish, The Real O'Neals, and the OG Modern Family. But, with this new half-hour comedy starring Minnie Driver, the network is focusing on a different kind of family. Driver is the mother of a child with cerebral palsy, who will do anything to make sure he gets the care he needs. But having a child with disabilities doesn't mean your life is a TV movie of the week. Instead, this is a funny take on what it's like to have a child with disabilities, done in what seems to be a genuine and heartwarming way.

Ginny Baker (Kylie Bunbury) is the first woman to ever play professional baseball in the MLB, but there are a lot more obstacles the newest pitcher for the San Diego Padres will need to overcome. This Fox show, which stars Mark-Paul Gosselaar and Ali Larter, is getting real about women's role in sports and how it's addressed by men. As the Olympics have taught us, it's still an area that needs some improving.

Fargo's Allison Tolman plays a woman named Nan who is struggling through life. But the only reason we know that is because her dog said so. Yes, this show, which started out as a web series, is told from the point of view of her dog, Martin, who is a lonely, philosophical pooch. Like his owner, he's just trying to get through the day. It's like Life Of Pets, but for adults who want to know what it's really like to be a dog. Turns out, it's much harder than you may think. Getting 14 hours of sleep a day is no easy feat. But, in the end, this is a love story between a (wo)man and her dog.

Shonda Rhimes is back with another show, but this one is a little different than her others. This one, based on Melinda Taub's book, is a drama that looks at what happened after Romeo and Juliet's tragic deaths. To watch or not to watch isn't really a question here. I'll certainly be tuning in to see Rhimes go medieval.

Alice (Jenna Elfman) just found the man of her dreams, but unfortunately, she also rediscovered her childhood imaginary friend who is interested in getting to know her new man and his three kids, too. It seems Alice may not be as comfortable as she hoped with her new role as wife and mother, but Imaginary Mary (voiced by Rachel Dratch) is here to help. Of course, Mary's not going to make things easy, and that's what's bound to make this show so funny.

Tarsem Singh, who directed The Cell, is breathing new life into the Wizard Of Oz with a dark and edgy reimagining for NBC that makes it clear that Dorothy isn't in Kansas anymore. NBC promises that, despite the fact that you know all of these characters, you've certainly never seen them like this. I recommend keeping an eye on Florence Kasumba, who plays the Wicked Witch Of The East and is bound to be the show's breakout star. You may be scared of her, but you're also going to want to steal her wardrobe. That's a promise.

This CW comedy is taking the idea of living every day like it's your last to the extreme. Based on a Brazilian series, this sitcom looks at an office manager named Evie (Tori Anderson) who falls in love with a man (Joshua Sasse) who believes the end of the world is coming. Together, they try and check off the items of their bucket lists. This guy may be deranged, but Evie is up for the adventure.

This Is Us actually shattered the record for most Facebook video views of a new show trailer during the week of TV upfronts, which is the seven day period when networks reveal their new shows for the fall, with 15 million views. I have to believe that has a little something to do with Mandy Moore and her onscreen husband Milo Ventimiglia (aka Jess Mariano). This show, which looks at different people who all share the same birthday and perhaps have other connections, also focuses on a woman trying to lose weight and perhaps find love. This is bound to be a tearjerker, so get the Kleenex ready before it premieres on Sept. 20.

The Office meets DC comics. This workplace comedy stars Vanessa Hudgens as an insurance adjuster who has to clean up the mess the superheroes leave behind after every battle. It may sound silly, but that's the point. This comedy gets to have a little fun on Batman and other DC heroes' dime.

While all of these shows are worth a watch, some of them are going to air at the same time, making it hard to choose which one to watch first. But, hey, that's what DVRs are for, right?

More like this
Lydia Leonard Is Setting The Record Straight
By Olivia-Anne Cleary
Here’s Where Caitlin Atwater Is After HBO Max’s ‘The Staircase’
By Brad Witter and Lindsay Denninger
What’s New On Netflix: A Victoria Justice Rom-Com & The Return Of David Letterman
By Arya Roshanian
What’s New On Netflix: The Return Of 'Bling Empire' & A Rebel Wilson Comedy
By Arya Roshanian
Get Even More From Bustle — Sign Up For The Newsletter