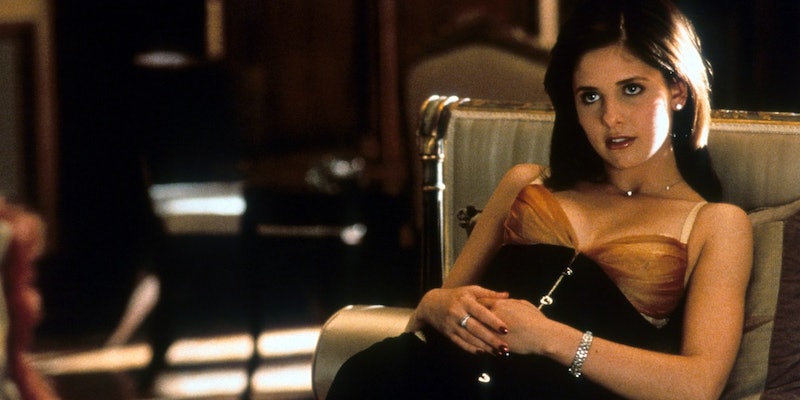 Cruel Intentions is one of the most beloved teen movies of the '90s, and it's also one of the most enduring. The racy, R-rated drama, loosely based on Pierre Choderlos de Lacios' Les Lisaisons Dangereuses, made a name for itself by, well, featuring a whole lot of sex — a general no-no for teen movies — and cemented stars Reese Witherspoon, Ryan Phillippe, Sarah Michelle Gellar, and Selma Blair as '90s icons. Over 15 years after it's release, Cruel Intentions hasn't lost any of its cultural impact. The film was adapted into an unauthorized musical, and NBC is still trying to work out how to make the Cruel Intentions television show a reality. But, just because the movie has managed to stay relevant for almost 20 years doesn't mean it's perfect. No, Cruel Intentions is actually super problematic.

Cruel Intentions is the standard bearer for how many taboo subjects one can cram into a teen movie. Here are just a few topics explored in the film: incest, rape, same-sex couples (much more of an on-screen taboo at the time than it is today), drug use, seduction of minors, and sex with minors, not to mention the more puritan taboos like cheating, oral sex, and pledging to take a young woman's virginity. In other words, Cruel Intentions doesn't just push the envelope, it pushes every single envelope it can find and then some.

Exposing taboos, especially sexual ones, on-screen in films meant for teenagers can be a very, very good thing. It's certainly better than pretending teenagers don't have sex. Cruel Intentions was certainly revolutionary in how openly it addressed sex and the unfair social expectations placed around it, but it's treatment of sex was also problematic. Sebastian (Phillippe) and Kathryn (Gellar), for example, are awful characters who spend their time either using sex to manipulate those around them, or manipulating people into sex. Not exactly the best heroes in a film. It could also be argued that the movies places too much of a premium on sex — suggesting that to be cool in high school you have to be sexually active.

Bustle decided to tackle some of these problematic aspects of Cruel Intentions in a recent installment of Be Kind Rewind, a '90s throwback podcast dedicated to celebrating the best that '90s movies have to offer.

When I watched Cruel Intentions for the first time, I was conflicted. On the one hand, I knew that it was an important piece of pop culture — one that, as a film lover, I should probably watch and hopefully love. On the other hand, I did not enjoy the way its characters were often portrayed. Sebastian, the character who starts out horrible and ends up slightly less horrible, failed to win me over. The treatment of sexual experimentation made me uncomfortable, especially how the movie focused on sex as something all teenagers in high school must, in one way or another, engage in. (Though, in fairness, I was still pretty young when I first saw the film.)

More like this
Why The '365 Days' Sex Scenes Are Good, Even If The Movies Aren’t
By Arya Roshanian
Laura Dern Said “Cultural Awareness” Made Her Rethink This 'Jurassic Park' Fact
By Grace Wehniainen
The 'Hocus Pocus' Sequel Finally Has A Release Date & It Makes Total Sense
By Shannon Barbour and Radhika Menon
A 'Bridgerton' Star Just Dropped A Major Hint About Joining The Live-Action Barbie Cast
By Bustle UK
Get Even More From Bustle — Sign Up For The Newsletter