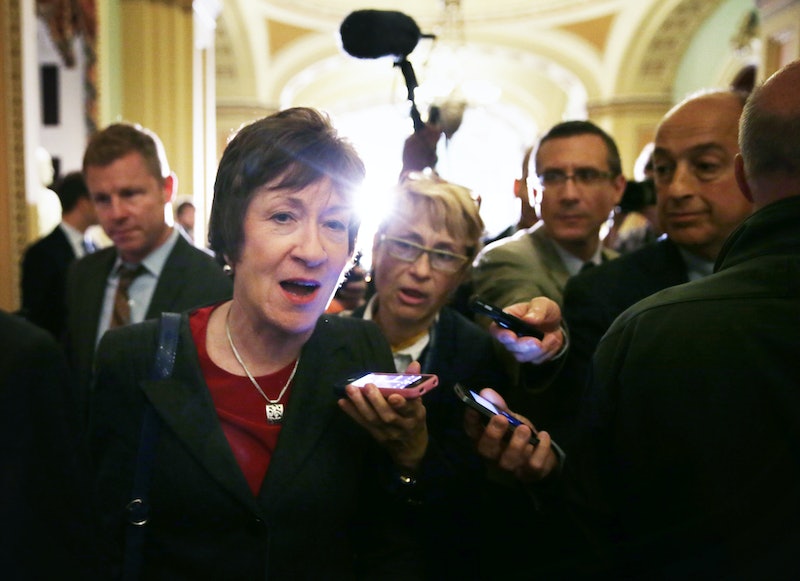 After a rough week for Republican presidential nominee Donald Trump, things seemed to get even rougher Monday afternoon. Moderate GOP Maine Sen. Susan Collins broke with Republicans to announce that she could not vote for their party's candidate. “Trump does not reflect historical Republican values nor the inclusive approach to governing that is critical to healing the divisions in our country,” Collins wrote in an op-ed in The Washington Post. “I am unable to support his candidacy.”

With two decades in the Senate under her belt, Collins is arguabl, the most senior U.S. senator to vocalize her lack of support for the Republican nominee. She joins fellow Republican senators Lindsey Graham, Ben Sasse, Mark Kirk, and Jeff Flake in their public declarations refusing to vote for Trump.

But Collins’ defection marks a more serious problem for Trump. Collins acts as a bellwether for the rapidly vanishing yet electorally vital moderate vote, earning the Senate's highest score on the bipartisan index — the Lugar Center and Georgetown University McCourt School of Public Policy's survey of how much each member of Congress is willing to work across party lines. While her declaration did not call for Trump to be replaced, it does offer a rationale by which less-radical Republicans can reasonably avoid voting for their Party’s nominee.

Unlike other recent announcements from prominent Republicans, like former California gubernatorial candidate and GOP fundraiser Meg Whitman, who have not only rejected Trump but have said they intend to vote for his Democratic opponent, Hillary Clinton, Collins explicitly stated that she could not support either party’s candidate. Still, Collins’ very public declaration says more than immediately meets the eye. Unlike other politicians who are up for reelection this fall, Collins was re-upped by Maine voters in 2014 for her fourth term, and doesn’t have to run again until 2020. That means she could have stayed on the sidelines, at least for a little while longer.

Instead, her editorial in The Washington Post hammered home many of the same issues that have featured in Clinton campaign attack ads on Trump, including his mocking a New York Times reporter with a disability, his attack on Judge Gonzalo Curiel for his Mexican heritage, and his media battle with the family of slain U.S. Army captain Humayun Khan.

The political calculus behind Collins’ decision is far from obvious. A Machiavellian read might note that Collins' next run will coincide with the 2020 presidential election, and that she might benefit by running for reelection in opposition to a second-term-seeking Clinton (or even for higher office). But while it’s dangerous to take a politician at their word, perhaps the simple truth is that Collins is opposed to (or scared of, or nauseated by) the reality of a Donald Trump presidency. She’s undoubtedly aware that, even without endorsing his opponent, she is likely easing Clinton’s acquisition of Maine’s electoral votes, helping the Democrat in her fight for the White House.

What will be most telling for Trump and the GOP in the aftermath of Collins’ announcement is whether this is a high-water mark for intra-party disaffection, or if it’s just the opening of the floodgates.