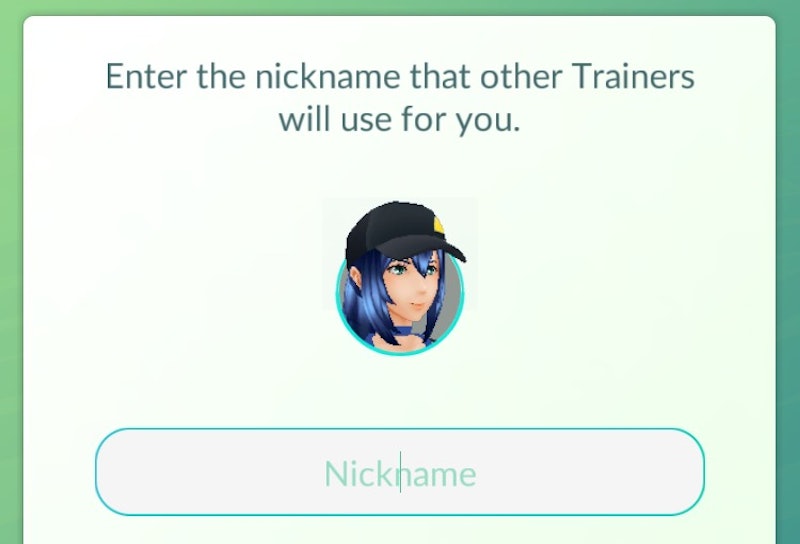 Given that the last “Pokemon Go” update gave us the ability to change how our avatars look, it’s perhaps only to be expected that the next one would let us change our avatars’ names, too. If you’ve been wondering exactly how to change your Trainer name in “Pokemon Go,” the good news is that it’s actually super simple; however, there’s… well, not exactly bad news, but something worth keeping in mind about the new addition, too: You can only change your name once. So whatever your new pick is… you’d better make it count.

The latest “Pokemon Go” update — version 1.3.0 for iOS users and version 0.33.00 on Android devices — dropped on Aug. 8, and with it came a whole host of new toys to play with. While some of those toys are decided less exciting than others (hi there, “minor text fixes!”), a couple of them are rather notable: The return of the battery saver for iOS users, a tool that will stop people from playing the game while driving (because seriously, you guys — BAD IDEA), a limited test of a new tracker function for some users, and the ability to change your Trainer character’s name. Right now, though, we’re only allowed to change our names once, making it somewhat different from the ability to change our avatars’ appearance that arrived during the July 31 update. (We can change what our characters look like whenever we want, as often as we want. It's fun, if you're into that sort of thing — kind of like Fashion Plates, but with more Pokemon.)

But hey, if you, like me, just randomly plugged in some combination of letters and numbers for your name when you first started “Pokemon Go”-ing in order to get to the actual game faster, you can now have a good, long think about what you want to be called — and then make it all happen. Because, if we’re being honest with ourselves, usernames like “ADBIJDB17682” just don't express our innermost souls, do they? Just, y’know, steer clear of providing too much personal information in your new Trainer name — every player you encounter will be able to see it, so make an effort to protect your own privacy. It's worth it.

Here's to swap your original name for a new:

1. From The Map Screen, Go To The Main Menu

This is the map screen. To go to the Main Menu, tap the Pokeball at the bottom of the screen. (I’ve no doubt you’ve done this many, many times before.)

2. From The Main Menu, Go To The Settings Menu

This is the Main Menu. To go to the Settings menu, tap the gear icon in the upper right hand corner of the screen. (I’ve no doubt you’ve done this many, many times before, too.)

​This is the Settings menu. "Change Nickname" is below "Help Center.” Go ahead and give it a big ol’ tap.

​Since you only get to change your nickname once, the game checks with you to make sure you really want to do it first. If you do, tap "yes"; if you're having second thoughts, tap "no"

5. Give Yourself A New Name

Type your new name on the next screen. When you’re done, tap “OK.” And voila! Your Trainer avatar has a shiny new moniker.

Pro tip: If you get as far as the screen on which you type your new name, but then decide that you don’t want to go through with it after all, simply closing out of the app and force-quitting the game entirely before you tap “OK” will let you make your escape. The next time you boot the game up, you’ll still have your old name. The important thing, though, is to make sure you don’t tap the “OK” button on the name change screen before you force-quit — once you do that, there’s no going back. Consider yourselves warned.