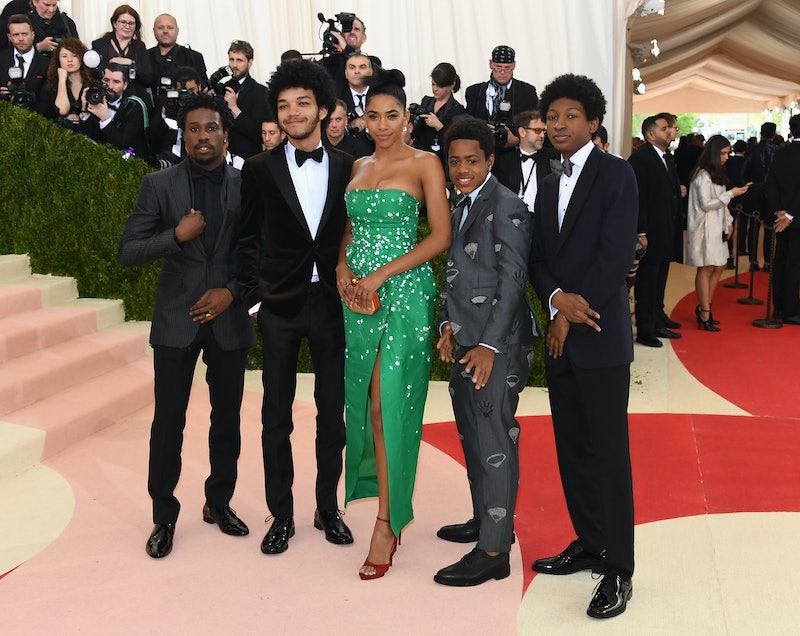 It's nearly impossible not to be intrigued by Netflix's newest series The Get Down. Set in the Bronx in 1977 at the birth of hip-hop and toward the end of disco, the "mythic saga" is bound to be epic in scale, thanks to creator Baz Luhrmann. And the cast of The Get Down, mostly comprised of young newcomers, only adds to the fascination. While there are experienced actors in the cast, The Get Down really focuses on a group of kids who will rap, dance, and sing their way through the series, so you're going to want to get familiar with this crew of young adults.

If you know anything about the series, which premieres its first half of episodes on Aug. 12, then you probably already know that Jaden Smith is in The Get Down and he's not the only famous person to be involved in the series — on or off screen. Jimmy Smits and Giancarlo Esposito provide some TV expertise as the adults in the series and the Australian Luhrmann smartly recruited Grandmaster Flash and Nas to help with creating the show. Flash, who is one of the pioneers of hip-hop, is not only portrayed in the series, but he acted as a consulting producer. Nas, a hip-hop star from a more current era, wrote original music for the show and these two hip-hop icons' influence bolster the young group of diverse performers in The Get Down.

So before embarking on Luhrmann's vision of hip-hop in the Bronx in the '70s, learn more about this buzzworthy cast — from fresh faces to beloved and notable actors.

Shameik Moore most likely looks familiar to you because he gained attention for his leading role as Malcolm in the 2015 film Dope. Although not much time has passed since his first starring role, Moore already looks much more grown up (must've been that flat-top haircut making him look young) as Shaolin Fantastic in The Get Down. Shaolin epitomizes coolness and acts as a leader for the group in the series.

Another actor who gained attention for a 2015 film is Justice Smith, who stars as Ezekiel "Books" Figuero (the nickname is for his smarts). Smith was Radar in the film Paper Towns, based on the John Green book, with Nat Wolff and Cara Delevingne and was mentored on television by Alan Alda in the HBO documentary Alan Alda and the Actor Within You: A YoungArts Masterclass. Books' raps are the backbone of The Get Down, so Smith is definitely one to watch.

The girl that Books has a crush on is Herizen Guardiola's Mylene Cruz. Although she is raised in a religious household and sings at her parents' Pentecostal church every Sunday, Mylene wants to break out as a disco star. And speaking of breaking out, The Get Down is Guardiola's chance at her own stardom since before the series, the triple threat had only been in the independent film Runaway Island.

As a disco king and "fly gangster," Yahya Abdul-Mateen II's Cadillac will be hanging at the club Les Inferno in The Get Down. Though you probably never heard of Abdul-Mateen II before, he looks poised to become a star since he'll be in at least three films in 2017 — Sidney Hall with Elle Fanning, Boundaries with Vera Farmiga, and Baywatch with Dwayne Johnson and Zac Efron. While I'm excited to see the Yale School of Drama graduate get down in The Get Down , I can't deny that I'm particularly pumped to see what Baywatch (yep, it's based on the TV show) is all about.

As previously mentioned, the most recognizable name of the young cast is Jaden Smith, the son of Will Smith and Jada Pinkett Smith. He portrays Dizzee — the oldest brother of the Kipling clan, who uses graffiti as an artistic outlet. Even without his parents, Smith has made a name for himself in the films The Pursuit of Happyness, The Day the Earth Stood Still, The Karate Kid and After Earth — though I should note that two out of four of those films also starred his father.

Skylan Brooks has grown up since the above photo was taken, so don't expect him to look exactly like that in his role of Ra-Ra Kipling — the reasonable middle brother of the Kipling family. Brooks' best-known role is Mister in the movie The Inevitable Defeat of Mister & Pete, but he's also been in the films Southpaw, Our Family Wedding, and Seven Pounds — starring none other than Jaden's dad Will.

While most of the cast of The Get Down are newcomers, Tremaine Brown Jr. is the only one to have no other roles listed on his IMDb page since the actor was discovered on the New York City subway. Brown Jr. portrays Boo Boo Kipling, Dizzee and Ra-Ra's younger brother who tags along with the group. Starring on the series will certainly give quite a boost to Brown Jr.'s career.

Although The Get Down isn't Mamoudou Athie's first professional acting credit, his role as Grandmaster Flash in the Netflix series is understandably his biggest role to date. Portraying the hip-hop star and DJ has got to be a little intimidating, but it should've helped that Flash was a producer for the show. And Athie better get used to working alongside greatness since he'll be in the upcoming film The Circle, which stars Tom Hanks and Emma Watson.

With a shared surname, you know that Mylene must be related to Jimmy Smits' character Francisco "Papa Fuerte" Cruz and the actor portrays Mylene's uncle. Papa Fuerte is a political boss in the South Bronx and obviously, Smits adds some established star power to the cast. Smits has found the most success with his roles on TV series, which have included NYPD Blue, The West Wing, Dexter, and Sons of Anarchy, but he's not a stranger to film either, like being part of the Star Wars prequel trilogy.

Zabryna Guevara, who portrays Mylene's mom Mrs. Cruz, is best known for her turn as Sarah Essen on FOX's Gotham. Beyond her television work, the actress has also had small roles in the films Marley & Me, The Guilt Trip, and X-Men: Days of Future Past and you can expect Guevara's character to clash with her rebellious daughter.

Breaking Bad fans, rejoice! Gus Fring actor Giancarlo Esposito portrays Mylene's strict pastor father Ramon Cruz. Esposito has an impressive résumé beyond his memorable turn in Breaking Bad with roles in films like Do the Right Thing, The Usual Suspects, and — more recently — The Jungle Book. TV fans also know him as Sydney Glass from Once Upon a Time, so this veteran actor — like Smits — balances out the less-experienced main cast.

Whether the stars have been working for years or are just getting their acting careers started, you know you won't want to miss their performances in The Get Down.