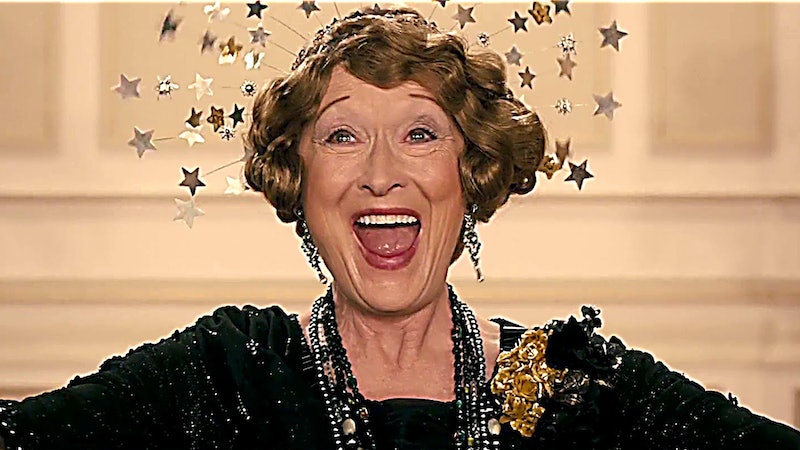 Meryl Streep is at it again. By that, I mean the world's most-acclaimed actor is starring in a critically-beloved film that will surely earn her yet another Oscar nomination. This time, she's tackling the lead in the new biopic Florence Foster Jenkins. The movie is about the titular woman, a music lover with big dreams and... not exactly big talent. Somewhat surprisingly, the film is actually based upon a true story, and photos of the real Florence Foster Jenkins show just how Streep actually compares to her character.

Jenkins was an American socialite who grew up loving music. She made her living as a piano teacher with dreams of being a concert pianist until an injury forced her to give up, facing her with the prospect of living the rest of her life without music — her greatest passion. She then decided she would become a singer, since this career path would allow her to stay involved with music. The problem with that plan was that she generally wasn't considered to be a very good singer. In fact, most thought she was quite awful. Despite what others said though, Jenkins never stopped pursuing her dream. She had a breakthrough when she met a British actor named St. Clair Bayfield, who encouraged her and became her manager, as well as her romantic partner for the rest of her life.

But Jenkins music career didn't really take off until the deaths of her parents. Her father passed away in 1909 when Jenkins was 40, and she inherited a substantial amount of money with which she used to further her dreams. She became involved with the music scene in New York City, and began performing recitals for her friends in 1912. Then, when her mother died in 1930, Jenkins received even more funds to keep her big dreams alive. She realized her biggest dream on October 25, 1944, when the gave her first and only performance for the general public at the legendary Carnegie Hall — and then died one month later at the age of 76.

It's quite the inspiring story, so here is a look at the woman herself, the real Florence Foster Jenkins.

And here is Jenkin's life partner, St. Clair Bayfield, who is portrayed by Hugh Grant in the film.

And finally, since I know you're curious, here is some audio of Jenkins singing for real.

Jenkins certainly has a unique story, made all the more interesting by the fact that she was a real person with an unshakable drive to go after her dreams.