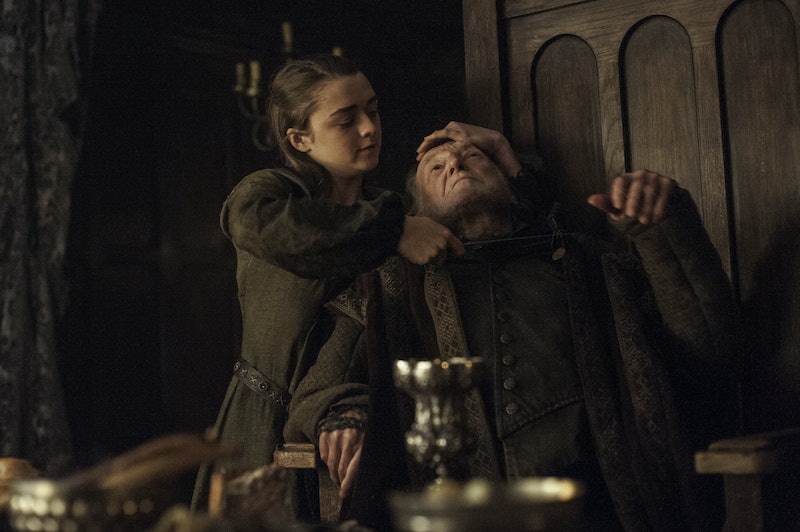 Cersei Lannister warned us a long time ago: "When you play the Game of Thrones, you win or you die." And it's a sentiment that has proven to be true time and time again. Watching a beloved character die on the HBO hit series is just as common as breathing at this point. True, Jon Snow has managed to defy the laws of nature thanks to his resurrection, but for the most part, being dead has become a pretty permanent thing in Westeros. And odds are, the body count will only continue to rise from here on out — it's just a question of who it will be. Obviously, fan favorites like Tyrion Lannister and Daenerys Targaryen are probably safe for the time being, there are some Game of Thrones characters that need to die in Season 7 and get the comeuppance they so deserve.

To its credit, Season 6 made good on delivering its own fair share of rightful deaths, including Walder Frey's at the hand of Arya Stark and, of course, the truly heinous Ramsay Bolton, who fell from his high horse only to become puppy chow. However, there are still a few characters out there on this show who need to pay for their crimes and finally meet their maker. For example...

He's been a loyal servant to Cersei, but that doesn't make him a good guy. In fact, he's pretty much one of the most dangerous characters on the show right now. Between his brute strength and seemingly lack of any conscience long before his transformation occurred, someone needs to hit the off-switch on this Franken-Mountain for good before any other lives are taken by his hand.

She may have brought Jon Snow back from the dead, but Shireen’s death still weighs heavily on all of our minds. It was unforgivable of her to sacrifice an innocent girl and for that, she must eventually pay the ultimate price. Consider her nights (and days) dark and full of terrors from now on.

Now that all three of her children are dead as the prophecy predicted, Cersei is becoming almost a mirror image of the late King Aerys (aka the Mad King), who will stop at nothing to get what she wants. She is quite literally and figuratively drunk with power. And now that the crown's on her head, who knows if she can be stopped. But one thing is certain — she should be.

The guy killed Ned Stark. Do I really need to explain this one any further?

To his credit, this guy tried to be good for a hot second in Season 6, but it seems as though his violent tendencies simply cannot be overcome. Sure, he kinda became Arya's friend at one point, but he tried to kill Brienne or Tarth and for that, there is no chance of redemption. Sorry, not sorry.

Where do you even start with this one? He left Sansa at the mercy of Ramsay Bolton; he pushed his own wife out the Moon Door without a second's hesitation; and he's basically the cause of everything that has ever happened on this show. Suffice to say, this dude has GOT to go.

I know we only met him briefly, but considering how awful he treats his own son, I wouldn't be all that sad if he were to find himself in mortal peril. You know what they say about karma...

Not only did he create Franken-Mountain, but he also helped Cersei get her hands on that wildfire, which killed hundreds of innocent people. That makes him just as guilty as her. She may hold the crown, but he gave her the tools to get there.

Granted, without him things would be a lot less interesting, but when your cronies end up killing Hodor all bets are off.

Who knows if any of these deaths will come to pass, but if they do, Season 7 could prove to be the bloodiest season yet — which is really saying something.