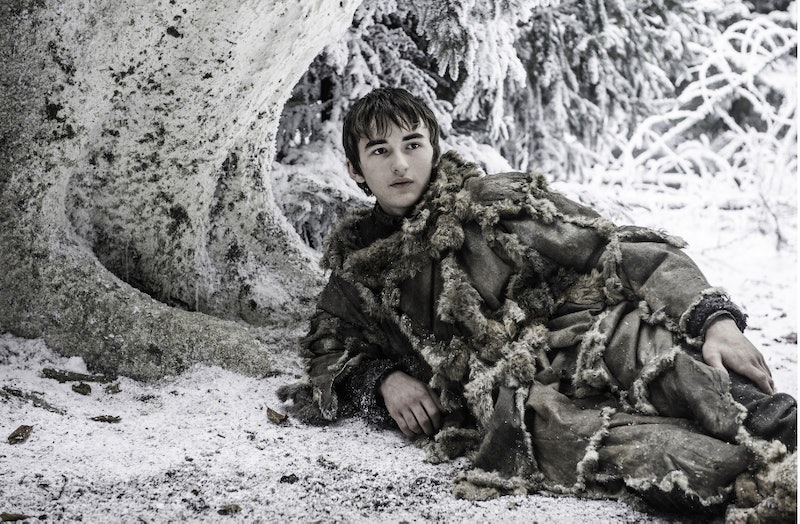 Though not a cheerful '90s sitcom, Game of Thrones still manages to have some pretty good catch phrases. Nothing puts more existential moroseness in into your day like "all men must die" and nothing will move your ice cold heart like "you know nothing, Jon Snow." But, arguably, the most famous GoT catchphrase is one the Starks drop as often as Tyrion drops knowledge on Daenerys: "Winter is coming." There are a lot of great things about this line: its versatility, the stoic shortness, its relation to our favorite Northerners. However, the best characteristic of the line is the multitude of real life situations when "winter is coming" is the perfect response.

When making friends, it's a great idea to make topical jokes, and everyone watches Game of Thrones. (And if they don't, then they should, because even President Obama takes time to watch the HBO series). So be sure to pepper "winter is coming" into your daily conversation, since it will definitely get a big laugh. And if people don't know where the line is from, then you get to educate them about something you love and pull them into a pop culture circle they really should already be a part of. It's a win/win situation, honestly. Here are some of the best times to pull this bad boy out of your referential joke arsenal:

1. When Winter Is Actually Coming

If you're carving up turkeys, have started wearing scarves, and are starting to feel a slight chill in the air, winter is probably coming close or may even be upon you. That's a great time to pipe in with the catchphrase.

2. When Brunch Is About To Start And You Work At A Popular Restaurant

Not many things feel quite as much like battling White Walkers as dealing with a brunch crowd who will stop at nothing to get bottomless mimosas.

3. When April 15 Is Approaching

While April 15 is more accurately the beginning of spring than winter, Tax Day — and the organization that it requires — is incredibly daunting. The ice cold fear it brings about feels like you're stuck in a snowbank.

4. When You Have A Summons For Jury Duty

Being on a jury is your civic duty, and, as a person with voting rights, you should definitely not dodge it. But that doesn't mean you have to look forward to it. Or that you can't make snarky remarks to your fellow jurors.

5. When You Get An Appointment Reminder From The Gynecologist

Sure, it's for your health, but a trip to the gyno is rarely an incredibly entertaining experience. Mention to the receptionist that "winter is coming," and you will both get a good chuckle out if it. Or she'll look at you funny trying to figure out what that's supposed to mean. Or both.

6. When Your Friend, Winter, Is Coming Over

I guess this one only really applies if you have a friend named or nicknamed Winter. But maybe you do. I don't know your life.

What better time to sound wistful and old timey than before a big storm?

8. When There Are About To Be A Bunch Of Lay-Offs At Work

When your job is on the line, it certainly feels like you have to prepare to be a little cold and hungry for awhile.

9. When Someone Texts You, "We Need To Talk"

Maybe the "talk" just about a really large cake they bought you and are trying to figure out how to deliver to your home. But usually, those four words have a more sinister context. When you get that text, try throwing back a "winter is coming" message. Maybe the person will think you're so delightful that they'll change their mind about whatever that "we need to talk" is about.

10. When Discussing The Next Season Of Game Of Thrones

It's pretty clear that things are about to get nuts in Season 7, so the phrase "winter is coming" is pretty poignant for this moment. Well, as is every other season of GoT because this show does not mess around.

11. When All Your Friends Are Getting Married

That's a lot of weddings to attend and spend zillions of dollars on. Sure, it's magical seeing your best friends pair off with the loves of their lives, but you also have to deal with a lot of weird in-laws and unfortunate bridesmaid gowns. Maybe write on your RSVP, "winter is coming." Couldn't hurt.

12. When You Haven't Called Your Grandmother In A Long Time

You knew as soon as she left that passive aggressive voicemail that your next conversation with her was going to be full of a lot of a guilt. She might not get your witty reference to Game of Thrones (but maybe she will, your Grandma could totally be into GoT), but she'll definitely have a reaction.

13. When You Buy Something Expensive With A Credit Card

The debt isn't there just yet, but it's definitely coming after you bought that silk cocktail dress for your friend's wedding. Be sure to say to the clerk, "Well, I feel fine about this, but I know that bill is coming just like winter in Game of Thrones." People who work in retail need a laugh just as much as the rest of us — if not more.

14. When You're About To Get Your Period

Check your calendar and realize, yes, it is your time of the month. Winter is indeed coming to your ovaries. Or maybe I should say the Red Wedding is coming? (I'll show myself out...)

15. When You Procrastinated On Writing A Paper

The paper is due Monday, and it's Thursday, and you haven't started even though you've known about it for two weeks. It's safe to say that your weekend is definitely going to be wintery. Or, at the very least, textbook-y.

They haven't seen you yet, but you've seen them, and it's going to take some pretty serious maneuvering so that they don't see you. Almost akin to the maneuvering Jon Snow and the wildlings had to take to get south of the Wall. It's a lot like winter. Sort of.

17. When You Broke Your Roommate's Favorite Vase

Hiding the pieces in the backyard won't cut it, and neither will blaming it on the dog. You've got to take responsibility for this, even though the vase was a 150-year-old family heirloom handed down from generation to generation and is completely irreplaceable. Your roommate's arrival home will certainly feel like winter is coming.

Maybe winter isn't actually coming, but you can definitely use the phrase "winter is coming" to sound hip and funny in everyday conversation. There's so many instances where it works and will get you a great laugh. Be too cool for school, say "winter is coming." It will make the horrible, mind-numbing wait to Season 7 seem so much shorter.