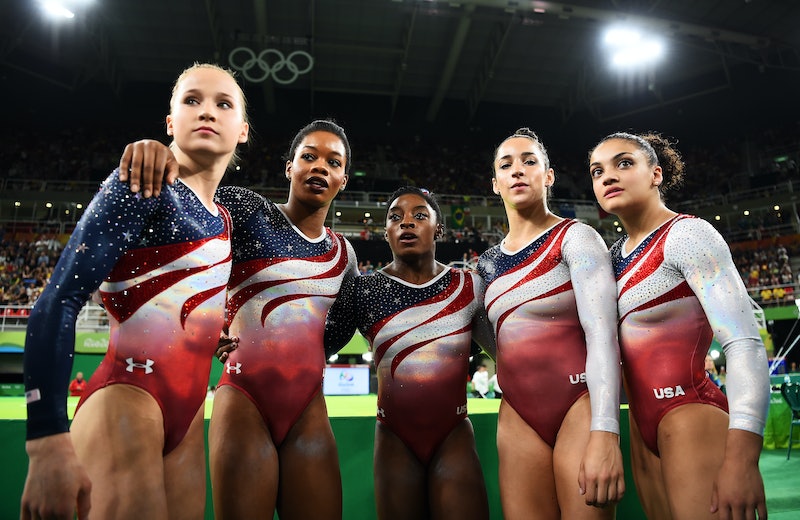 The 2016 Olympics in Rio have been full of fun quirks like greased up flag-bearers, blue-haired athletes, and even team nicknames — along with the usual incredible displays of athleticism. While flag-bearers and Ryan Lochte are both fascinating topics, let's focus on team nicknames for now. Team USA's Women's Gymnastics Teams won themselves the gold for All-Around and with that win, they coined their own nickname: The Final Five. The addition of nicknames might have you wondering if other teams in the Rio Olympics have nicknames.

Well, the answer to the question is yes, but there are not as many countries or teams out there doing the nickname thing as you would think. In fact, upon further research, it seems that the only teams with official unofficial nicknames are those from Australia. But Australia doesn't stop with Olympic teams, nosiree, according to the World Heritage Encyclopedia, every national sports team has a nickname in Australia.

While these nicknames aren't the same as the self-coined type brought to us by the Final Five — they don't change based on who is on the team — they still add a level of fun and goofiness to the games which is much appreciated.

World Heritage Encyclopedia explains that the oldest nicknames are Kangaroos (rugby league football) and Wallabies (rugby union) and that other names are more recent. These nicknames are usually invented by marketers to publicize sports not traditionally popular in Australia. The following are some of the nicknames used by Australian Olympic teams.

As in the song "Waltzing Matilda".

This one is a combination of the words "Olympics" and "kangaroo."

They are really into this kangaroo thing. And who can blame them really? Kangaroos are dope.

I truly believe they could come up with something better than that.

Again, the water-themed nicknames continue to be sort of lame.

See #'s 5 and 6 for opinions on this nickname choice.

That has a lovely ring to it, doesn't it?

Yet another kangaroo reference — according to the San Diego Zoo website, male kangaroos are called "boomers."

These are just a few of the nicknames Australia has coined for their teams — there are many more in a vast array of sports nicknames for every team from wheelchair basketball to cricket to Quidditch. While the USA Women's Gymnastics Team seems to have the right idea, I think the rest of the world's Olympic teams need to get on Australia's level. It might get a little confusing, but it would definitely be very entertaining. Bring on the nicknames!