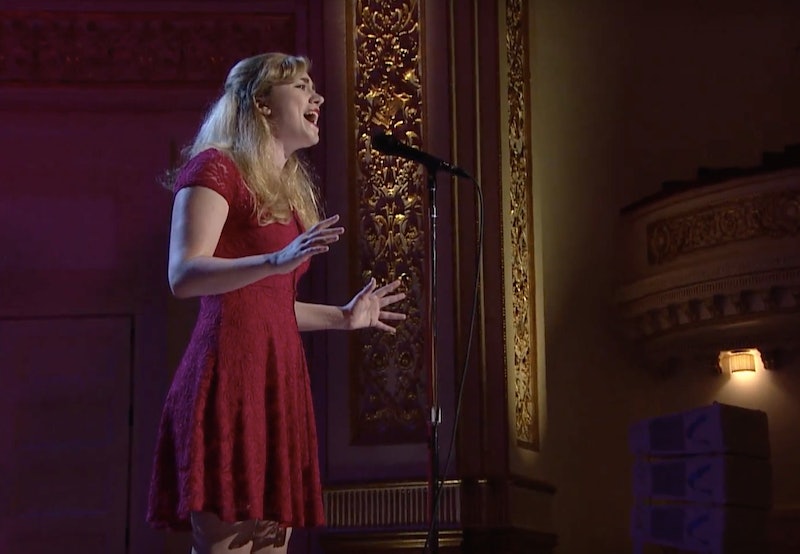 In what felt at the time like the worst moment of my life, I was sitting on the floor of my Hello Kitty-themed bedroom, profusely crying into a pink carpet, clutching a ripped open envelope in my hand as Miley Cyrus's The Climb blasted on my boombox. The envelope looked exactly the same as all of the other 13 envelopes I had collected in the trash — Dear Emma Lord, they all started. Thank you for applying to our musical theater program for the Class of 2013. Unfortunately ...

Each of those ripped envelopes were so much more than a piece of paper. They were a city that I traveled to, and a weekend of pit stains and the smell of my own fear and measuring myself up against hundreds of other girls. They were a song that I practiced over and over until it was tattooed to the inside of my ears. They were 17 years of focus, 17 years of excitement and nerves and tears, 17 years of tunnel vision and that childish, inexhaustible belief that I had a destiny, and that musical theater was it.

And when the last of those envelopes came, all of them too small, I couldn't help but feel small, too.

I grew up the same way a lot of A-type kids did: If I wasn't good at something, I just plain wasn't interested in it. I didn't want to waste my time or energy on something that I didn't have a chance at being the best at. Singing was the one thing I was unquestionably good at, and that's how I protected myself from embarrassment. I put all my eggs in that basket because it seemed like those eggs were made of steel.

I wish I could say that that dramatic floor-cry was an illuminating moment for me, but it wasn't. (Although it is, in retrospect, pretty damn funny.) In truth, I would spend the next few years of my life trying to sing professionally and striking out — through rounds of brutal auditions in New York, traveling to try out for transfer programs, even moving to Nashville after college to be a songwriter. An all too familiar pattern began to form: I would go and I'd give it my all, and then decide at a certain point that I had failed — and then stop.

In 2013 I moved away from Nashville, and barely touched my guitar for months. I was angry. I was ashamed. Singing seemed completely pointless — why even bother, if I wasn't going to get what I'd wanted? The way I steered myself, I hadn't just lost my pride, but all of my ability to enjoy something that used to be the reason I breathed.

I am far from the only person who's ever felt this way about a dream. We hear a thousand stories about people who defy the odds and make it, but for every thousand of those stories there are a million failures. But that's the problem with defining failure — it is what you make it. I left Nashville because I thought I'd failed, but what was "failing," really? There are no grades in life, nobody standing there with a timer and saying, "Welp, time's up, you better pack it in now." There's no measure for failure and success on any kind of quantifiable scale. I was a failure because I'd decided I was one, and nothing more.

So as a person who deliberately put herself over and over again in the sea of a million failures, I cannot help but admire the woman who took what many of us would objectively consider an ultimate failure and instead fulfilled her ultimate dream: opera singer Florence Foster Jenkins.

A rich socialite born in 1868 and raised in Pennsylvania, Florence Foster Jenkins and I have very little in common, aside from one thing: we both love to sing. The stark difference being, of course, that I'm reasonably confident I can call myself a good singer. Florence, on the other hand? ... Not so much.

But remarkably, Florence didn't let that deter her. Even long after her father had denied her the opportunity to practice voice in Europe and long after she had resigned herself to a life as a piano teacher, when her father left her an inheritance in 1909, Florence used it to fund her singing career from the ground up — starting at the age of 41.

Despite her age, and despite her glaring lack of talent, her passion overwhelmed all of the odds. She took lessons, joined music societies, and funded her own performances. She took to the stage with the fearlessness of someone who was born on it. She understood that people were laughing at her, but she famously said, "People may say I can't sing, but no one can ever say I didn't sing." And so beloved and iconic was she that by the age of 76 she finally yielded to such extreme demand for her to give a public concert at Carnegie Hall that the venue sold out weeks in advance, and attracted dozens of celebrated names of the era.

This year I've been channeling a lot of Florence. I do things that I'm bad at. I joined an improv class. I took kettle bell classes. I bought a crockpot to try cooking something that wasn't grilled cheese. None of these activities are vaguely connected to each other, except for two important things: I am terrible at them. And I love it. It took me 25 years to give myself permission to be bad at something, and holy crap, you guys. It feels so good.

As for singing? I gave up on my dreams. Or better yet, I made peace with them. I stopped calling them “dreams,” which always made it sound like such an ominous burden to fulfill. Now I do exactly what I want to do, when I want to do it. The problem was the things I wanted to do weren't dreams — they were joyful things that I already had, made more miserable by my expectations for them. And when I finally let it go, it changed everything for me. It's why I love singing again. It's why I was finally able to join a community theater, to pick up my guitar again, to feel the full and ridiculous joy of having an instrument in my body — of having something precious that is just for me, and not for anyone else.

It's why when, to celebrate the upcoming Florence Foster Jenkins movie, I was offered a chance to sing on the Carnegie Hall stage — the way Florence herself did many, many years before — I didn't feel small. I didn't feel afraid. I didn't even feel vaguely related to that 17-year-old girl sobbing on her bedroom floor. I felt for the first time like the version of myself I'd always wanted to be, before all the pressure got in the way: someone who thoroughly, unabashedly, unapologetically loved something. After years of holding a measuring stick to myself and feeling lost, looking for validation in all the wrong places, it felt like coming home.

I know it sounds like I'm saying to give up on your dreams to make yourself happy, but what I really mean is to stop calling the things you love to do "dreams". It's an insult to yourself and all of the opportunities you have in this life. Life is too short to consider anything beyond your reach, too short to doubt whether you are "good enough" to pursue something. If you want to do it, then do it. You don't owe the world anything in exchange for your joy.