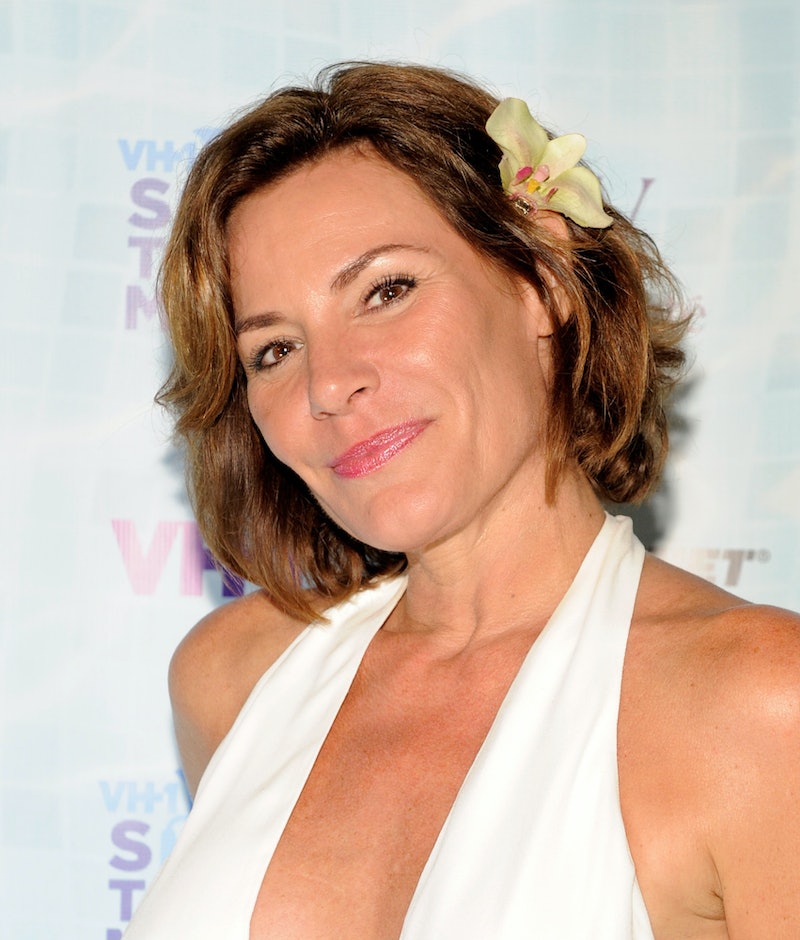 It's nothing new for Bravo to air the weddings of a Bravolebrity, especially when it's a Housewife. Plenty of Real Housewives stars have gotten married and have even earned their own wedding spinoffs, including Real Housewives of Atlanta's Kandi Burruss, NeNe Leakes, and Kim Zolciak, Real Housewives of Orange County's Tamra Judge, and Real Housewives of New York City's Bethenny Frankel. And if you ask me, LuAnn de Lesseps' wedding also needs to be televised. Since the RHONY star is marrying Tom D'Agostino Jr. at the end of 2016, why not turn it into a TV special? My fellow Housewives fans probably agree with me when I say it would boost Bravo ratings, not to mention incorporate several elements that are perfect for TV.

Since all of the aforementioned Housewives have earned their own spinoffs featuring their weddings, why not The Countess? Well, there's a good chance she doesn't want it to air and prefers to keep it all between herself, D'Agostino, and the guests. As she told E! News in June about the putting the wedding on TV, "I adore Tom and I want to be happy. I don't want to have the Housewives curse so I don't think that's something I'm willing to do." She added, "I think there's a lot to be learned from Housewives wedding specials. I think the only person who has been able to pull it off is Kim Zolciak-Biermann." The Countess also said that D'Agostino is a "very private person," so she wants to respect that. (So that's why he's been on RHONY ?)

However, if de Lesseps has changed her mind and now wants a TV special, then Bravo better make it happen, stat. Both the network and The Countess may need a little convincing, so here are some reasons why her upcoming nuptials would be a huge hit.

She Has Three Wedding Dresses

While talking with Sirius XM's Taylor Strecker on Wake Up with Taylor Wednesday, de Lesseps said she has three wedding dresses. That's right, three! "I'm actually doing a couple of wedding dresses because it's a big occasion," she revealed. "I'm doing a traditional [dress] to walk down the aisle — lace not puffy. I've never been a puffy girl, type of person. Fitted and lacy and at the same time a little sexy, and I'm going to wear a veil."

Yes, she will be wearing white, especially since this is her fiancé's first wedding. "Tom has never been married so I want him to have a real bride." However, not all of her dresses will be white. "I want [Tom] to see a bride down the aisle," she explained. "[So] my thoughts are why not wear white? I'm doing a little white cream, a little blush."

Get ready for another "Money Can't Buy You Class," "Chic, C'est La Vie," and "Girl Code" moment, because The Countess might sing to D'Agostino. While chatting with Strecker, she said, "So I'm wearing three dresses... the traditional one, the one I might sing a song for him in — I'm going to sing in a short dress — and the end of the night dress. It's a bit revealing with some bling, but elegant at the same time, of course." Not only will she be making a statement with her dresses, but she may also make a statement through song. Here's hoping she does — and that it's captured in a TV special.

There's been some debate for a while now over who de Lesseps would invite, including which RHONY co-stars will receive an invitation. According to E! News, as of early August, only one of her co-stars has been invited. Who is the lucky lady? It is none other than Dorinda Medley. That really shouldn't shock anyone, especially with all of the drama surrounding de Lesseps, D'Agostino, Sonja Morgan, and Ramona Singer. However, they could end up coming to the wedding on one condition.

She clarified all of the invite drama with Wake Up with Taylor and explained, "I haven't sent invites yet... so what it means is that I have sent out Save the Dates. I wouldn't say I axed [anyone]. It's not a nice word. I would say they are not invited for the moment." So, they could still end up being invited? That's sure what it sounds like. Either way, there are two other Housewives coming and they are, former RHONY star Jill Zarin and Real Housewives of Miami's Marysol Patton.

Whoever ends up attending, it sure is going to be a Bravo-filled guest list.

It's unclear how many bridesmaids she will have or who will serve as maid of honor (probably her daughter, right?), but the name of one bridesmaid has been revealed. According to People, Medley is one of de Lesseps' bridesmaids. I mean, she did introduce The Countess to her soon-to-be husband, so it only makes sense.

Leave it to de Lesseps to have her wedding during one of the most celebrated times of the year, not to mention a day that is also special to D'Agostino. As reported by People in March, she is getting married on New Year's Eve 2016, which is also her fiancé's 50th birthday. Their wedding will be held in Palm Beach, Florida, with some time spent on a yacht. "I plan to make it a weekend to remember, with a cocktail party on a private yacht kicking it off," the 51-year-old reality star told People. Based on her past experiences on yachts (and with the RHONY women), here's hoping the ship doesn't go down sinking.

"Special Friends" Will Be In Attendance

In addition to the guest list, it appears some "special friends" will also be attending. Those are the words de Lesseps used while chatting with People in March, but who the heck knows what that means. Is a special guest going to sing with her? Is she hiring a well-known band? Is someone performing? Whatever she means by "special friends" remains unknown, but I'm definitely curious.

There Will Be Drama

When isn't there drama surrounding the RHONY star? Plus, if she does end up inviting her other co-stars, then something is bound to occur in the drama department. It's rare these women can go anywhere without arguing about something or bringing up a sensitive subject. I hope de Lesseps' wedding day is drama free, but I'm not holding my breath.

It Will Be Over-The-Top — Duh

From three wedding dresses to her possibly singing to the "special friends" to the yacht to it being held on NYE, de Lesseps is already going above and beyond. I'm sure that's only the short list, too.

See why her wedding needs to be televised? Keep those fingers crossed that it comes to fruition.