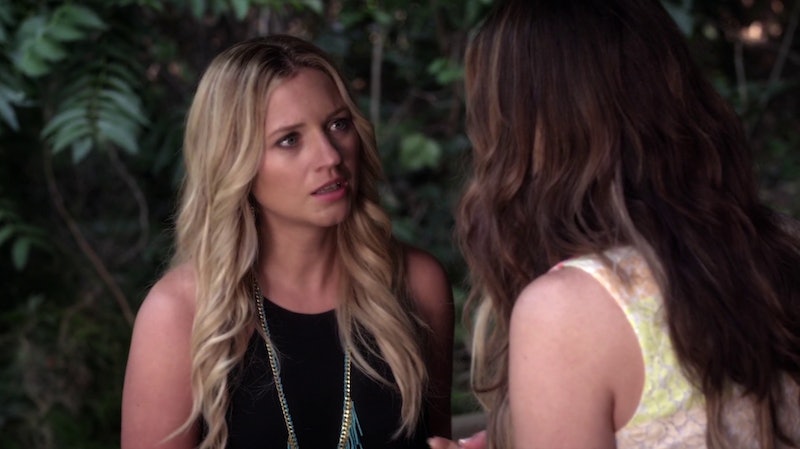 There is no shortage of family secrets on Pretty Little Liars, and as Jessica's (possibly evil?) twin Mary Drake puts it, "sometimes those secrets are people." That's certainly the case with the DiLaurentis family, who apparently can't get through a season without learning that there's a relative with a hidden agenda out there. For instance: We discovered at the end of Season 6A that CeCe Drake was really Charlotte DiLaurentis, and learned that Charlotte was the biological child of Jessica's secret identical twin Mary in the Season 6B. Now, it could be time to draw another branch on that family tree, because, according to Tuesday's episode "Original G'A'ngsters," Mary had a second child and Charlotte has a biological sibling. Though we don't yet know the gender of the child, there is one potential clue that could hint that Charlotte's sibling is a boy — and it could narrow down our suspect list by a lot.

Right now, the main thing we know about Charlotte's sibling is that they would be around the Liars' age — which, obviously, means that the Liars are looking at everyone in their graduating class with even more suspicious eyes. It's a pretty smart move on the show's part — there are so many people the Liars' age to be suspicious of that even if we "narrowed down" the suspect list here of people by age, that list is still pretty long. However, there's one clue from Charlotte's dollhouse that could suggest Charlotte's sibling is actually a guy. Remember those mannequins the Liars found in Charlotte's room in the dollhouse during the Season 5 finale? Well, take a look:

Note the genders of the dolls. There's a blonde girl, who could represent Charlotte. Then there's a boy that looks a little bit younger than the girl — could this person be Charlotte's little brother? Before you think I'm grasping at straws, it should be noted that this very picture is the one that PLL spoiler account That's What -A Said made their profile picture this week. The account then went one step further and retweeted the person who commented on it — it seems that the account wants us to take this image into serious consideration.

Considering that all of the other "secret siblings" on Pretty Little Liars have been women, discovering that Charlotte has a secret brother out there would change things up. There's also the possibility that we've already seen Charlotte's brother working with his big sister before. Remember this masked figure in the dollhouse, whom Spencer thought seemed "familiar," like a "cousin?" We assumed this person was Charlotte, but it always felt a little odd. What if the dollhouse was actually run by both Charlotte and her younger brother, who was the one Spencer really interacted with?

Charlotte having a brother would tie so many odd ends together, and might solve this A.D. mystery once and for all... if we can narrow down the suspects enough to finally figure out who he is.