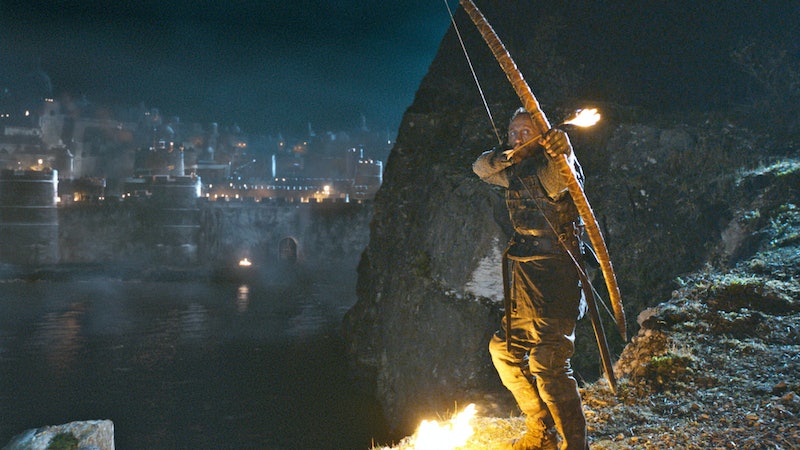 If you ask a group of people what their favorite Game Of Thrones episode was, you're bound to get many different answers. Some people might go recent and name the Season 6 finale, "The Winds Of Winter," with its explosive opening sequence; others might name the infamous Red Wedding episode "The Rains Of Castamere" or the out-of-nowhere battle of "Hardhome"; some might go back to the beginning, with Season 1's climactic "Baelor" or even the show's pilot, "Winter Is Coming." But no matter what your personal favorite is, the one episode that you'll consistently find at or near the top of almost every Game Of Thrones ranking out there is the penultimate hour of Season 2, "Blackwater."

Looking back, this may seem like a mildly confounding choice. It was the show's first big battle episode — but there have been much bigger since. (Not just "Hardhome" but also "The Watchers On The Wall" and "Battle Of The Bastards.") And it came at the end of one of GoT's weakest seasons — you know, the one in which Dany got lost in the desert, killed time in Qarth, and then shouted "Where are my dragons??" So over time, "Blackwater" may have lost some of its immediate luster; but it deserves a second look because, on rewatch, it remains one of the best episodes in Game Of Thrones history.

Here are 39 things that stand out when rewatching "Blackwater":

The hour opens with Stannis' fleet sailing through the night. There aren't any lines for a solid couple of minutes, leaving ample time for the episode to highlight composer Ramin Djawadi's gorgeous music.

Oh yeah. I totally forgot that Davos had an adult son, the annoyingly religious Matthos. I wonder what happened to him…?

3. The Calm Before The Storm

The beginning of this episode is notable for being very quiet. Everyone knows war is coming and a hush has fallen over King's Landing. Tyrion lies in bed contemplating the thought that he might be dead by morning. "You can't f*ck your way out of everything," he tells Shae.

Tyrion prepares for battle with sex, Cersei prepares by procuring essence of nightshade from Maester Pycelle — just in case. Typical.

5. The Rains Of Castamere

Bronn is in a pub singing the Lannister theme song. That's some clever foreshadowing, considering the penultimate episode of the following season would feature the song in a much different — and bloodier — context.

The epic fight that almost was: as tensions run high, Bronn and The Hound almost face off. I wonder how that combat would've gone down. Fortunately, we didn't have to lose either of them — yet — as the situation is literally saved by the bells.

Varys tells Tyrion about the tunnels the Targaryens build beneath King's Landing in case the battle goes wrong and the Hand of the King wants to escape. Another hefty dose of foreshadowing, as those tunnels would come in handy during Tyrion's escape from King's Landing in Season 4, and again during the explosive events of the Season 6 finale.

Fifteen minutes into the episode, and the quiet is officially over. As Stannis' fleet approaches King's Landing, they start beating their drums and our hearts start beating faster as everyone inside the Red Keep rushes into action.

In case your forgot. The bratty boy king makes Sansa, still his betrothed at the time, kiss his sword Hearteater. "You'll kiss it again when I return… and taste my uncle's blood," he says disgustingly.

The Stark girl has a long way to go to her epic Season 6 days, but she's already starting to get more courageous. "Will you slay him yourself?" she challenges Joffrey. "They say my brother Robb always goes where the fighting's thickest — and he's only a pretender." *mic drop*

Remember when the Lannister cousin looked like this? I'm not advocating for religious zealotry or anything, but his Faith Militant haircut was way better.

Tyrion and Joffrey petulantly refuse to talk directly to each other; Joffrey passes his messages through the Hound and Tyrion passes his through Lancel, even though they're all standing right next to each other.

While the men wait on the ramparts, the women wait in Maegor's Holdfast, where Cersei holds emotionally abusive court over her terrified handmaidens. It's every bit as awkward as it sounds.

We know something's not right… even before we see the green goo dripping out of the lone ship's portholes.

Bronn gets the episode's big moment. Of course, he doesn't let us down.

Perhaps Game Of Thrones' most awe-inspiring visual since Dany's baby dragons in the Season 1 finale — and one that wouldn't be upstaged until Cersei set off her own wildfire explosion four seasons later, even bigger than her brother's. (Typical sibling rivalry.)

18. Oh, That's What Happened To Matthos

19. Stannis Has Always Been A Stickler For Details

Before he corrected that Night's Watchman's grammar, Stannis corrects one of his soldier's math. "Hundreds will die!" the soldier cries. "Thousands," Stannis grimly replies. Always good for a chuckle, that Stannis.

20. No Time For Speeches

"Come with me and take this city!" is Stannis' short-and-sweet rally cry to his troops. Effectively simple.

One of the most honest things Cersei has ever said.

Cersei reminds Sansa what happens when a city is sacked: all of the women in the room will be "in for a little bit of rape," is her incredibly indelicate way of putting it.

…with a volley of flaming arrows.

More like Rock, Helmet, Skull. Guess which one wins? (Hint: it's not the skull.)

Lancel is hit by an arrow approximately 0.73 seconds into the battle. Way to go, Lancel.

When Cersei hears that Stannis' troops have landed outside the ways, she orders Joffrey be brought back to his chambers for safety, optics notwithstanding. He's only too happy to oblige. Wimp.

We already knew Sandor Clegane was scared of fire thanks to his charming older brother; with ships and arrows and people burning all around him, The Hound has quickly had enough.

When a squire makes the mistake of handing The Hound a flask of nice refreshing H20, he spits it in his face. "F*ck the water. Bring me wine," Sandor snarls. A man after my own heart.

When Joffrey and Tyrion demand The Hound go back out and fight, he hands in the most epic resignation letter of all time. "F*ck the Kingsguard. F*ck the city. F*ck the king." Sandor out!

30. "Those Are Brave Men Knocking At Our Door. Let's Go Kill Them!'

Tyrion's speech is a bit more rousing (and vulgar) than Stannis'. He actually has soldiers chanting "Halfman!" as they follow him into battle. Epic.

When Lancel tries to argue with Cersei that Joffrey should go back and lead his own troops, she punches him in his arrow wound. It's hilarious.

32. The Hound And The Little Bird

Out of all the show's odd couple pairings, this one is undoubtably the oddest. Sandor urges Sansa to flee King's Landing with him; she decides to stay, which is perhaps one of the worst decisions Sansa's ever made — and that's saying something.

Just when things are looking up for Tyrion, he's attacked by one of his own Kingsguard. Methinks a certain spiteful sister might be behind this…

Before Ser Mandon Moore can finish Tyrion off, his squire saves the day by stabbing the knight from behind. In the face. With a spear. You go, Pod.

Dean-Charles Chapman didn't always play Joffrey's younger brother; in fact, he didn't take over the role until Season 4. Back in Season 2, Tommen looked like this and was played by Callum Wharry.

Whoa. It's easy to forget, but Cersei totally almost killed Tommen during this episode. She would rather poison him herself than watch him executed by Stannis' troops. (In hindsight, maybe she should've gone through with it; poison probably would have been preferable to committing suicide after watching your mother blow up your beloved wife.)

Cersei is stopped in her tracks by the the most epic hair toss of all time as Ser Loras strides into the throne room with the combined Lannister-Tyrell troops and pulls of his helmet all super suave like.

Kickstarting the Game Of Thrones tradition of having battles saved at the last minute by a charging cavalry (see also: the battle of Castle Black and Stannis, the battle of Winterfell and Littlefinger), Tywin's troops totally pwn Stannis' — and even though Tyrion is the one who kept them at bay until he arrived, his dad's the one who gets all the glory. "The battle is over," he announces. "We have won!"

In a bit of a departure for the show, the closing credits music, "The Rains Of Castamere" once again, is sung… by American indie rock band The National. Strange but awesome.

OK, that episode is epic. Being confined to one location keeps it tight and focused, and unlike in some of the show's later battles, it's hard to know who you want to win! Even if the budget has gotten bigger and the effects have gotten better in the past few seasons, "Blackwater" will remain one of Game Of Thrones' strongest and most memorable episodes.