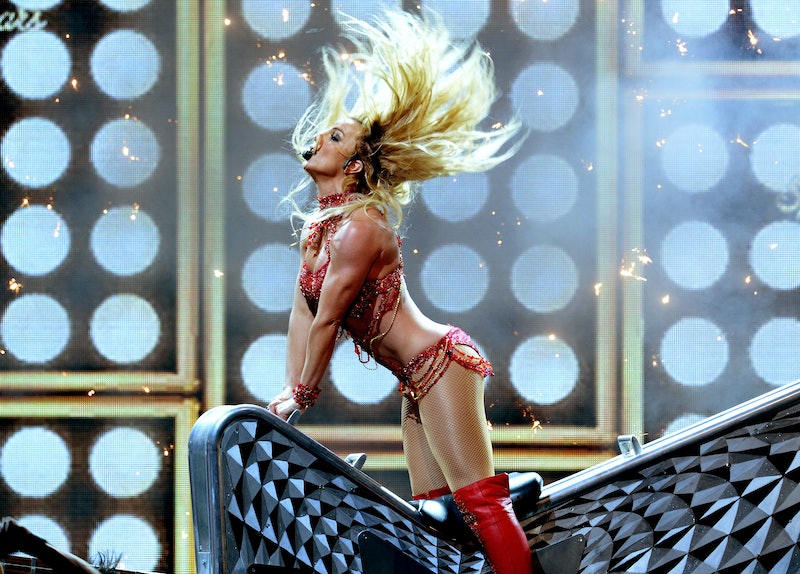 I've been longing for a sign that the Princess of Pop was really, truly back, and the lyrics to Britney Spears' new song "Clumsy" are exactly what I was waiting for. I know that she's had plenty of success since she came up against all those obstacles in 2007, but, until I heard "Clumsy," I wasn't convinced that she'd ever return at full force. (I mean, we all remember Britney Jean , right?) It's both a relief and a joy to hear Spears return to her former glory with the empowering, x-rated "Clumsy" lyrics. It harkens back to one of those old Spears bangers that we'd get down to everywhere from the club to dancing around cleaning our apartments in our underwear. On top of that, the lyrics are... well, they're frankly pretty filthy, and I couldn't be more delighted.

"Clumsy" is the third single that Spears has released in advance of her ninth studio album, Glory — now you get that pun from earlier — which is dropping Aug. 26. She doesn't waste any time getting down to business with these lyrics. Here are the opening lines.

Oh, hello. Somebody should probably get a hose in here, because this is fire. It's also essentially a description of pure sex, and I want to give Spears a standing ovation for coming in so hot. And for coming in so catchy, because "Clumsy" has the kind of beat and melody that would get you feeling yourself regardless of the words. However, the fact that it's so sex-positive and just straight up sexy is a huge bonus.

Cuz I'll be slippin' off this dressFooling 'round and then we smashAgain and again (come here, baby)ClumsyNever told a soul about what we've doneYou let it roll right off your tongueAgain and again

Again, this is Spears' ninth studio album, so she doesn't need to play around when it comes to her lyrics. There's no more coyly sneaking it in like with "If You Seek Amy" — the sex is right out front this time, and Spears is making no apologies for it. She's back, you guys. She's back. Take just one listen to "Clumsy," and you won't be able to deny it.

Someone fetch me my smelling salts.