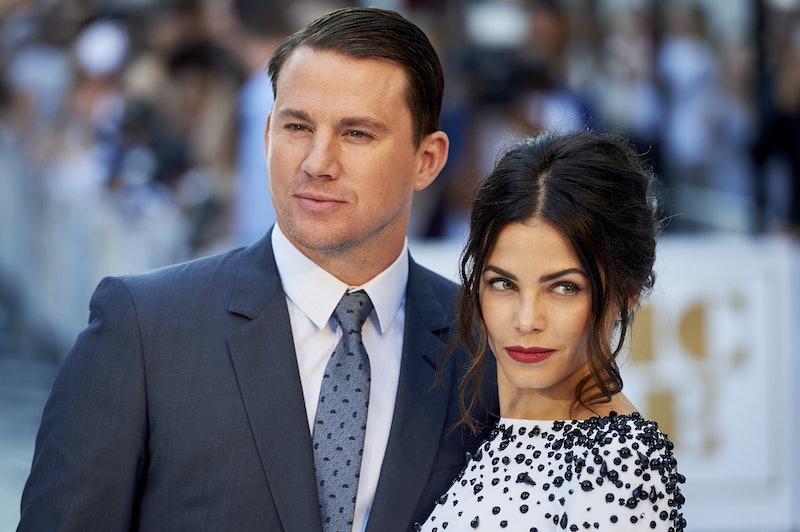 If you don't believe that art has a way of imitating life, just take a closer look at some of the best onscreen couples of the 2000s. You'll quickly notice that many of them are also some of our favorite celebrity couples off-screen in 2016. Yes, it seems the '00s have been a good time for real life cinematic love. And, while only one of these couples met on a Nicholas Sparks movie, the rest have managed to write their own love stories once the cameras stopped rolling.

While on-set romance isn't unheard of, these couples have managed to make it work in the years since their movies came out. One couple is even currently celebrating the 10-year anniversary of when they first met. (Hint: they were both in Step Up and now share a last name.) A lot of these couples played lovers onscreen and seemed to like that role so much that they kept it going. At least three couples kept things so private that most of us didn't even know they were together. (Yep, looking at you Alexis Bledel and Vincent Kartheiser.) And still others barely shared any screen time, but still managed to find one another somewhere on the set. My guess? Craft services.

These co-stars show that real love can be just like it seems in the movies, quite literally. (Hello, Mr. and Mrs. Smith.) But, it can also be even better since, you know, this love is real.

It's been 10 years since these two first shared the screen in the teen dance drama. Now they're sharing much more with one another. Though, we wouldn't mind if these two reunited onscreen for one more dance.

The two denied there was anything going on during the filming of this movie, but, on subsequent viewings, it's clear they couldn't deny their attraction. Seriously, watch that dance scene again. Yowza.

The Green Lantern is not a good movie — Reynolds has admitted that — but it did lead to good things for his love life. The two would stay friends, even going on a double date that Reynold would tell Entertainment Weekly was the "most awkward date for that respective party because we were just like fireworks." Lively said she didn't remember the fireworks, but did say the reason they work so well is because they were friends first. Good advice for non-celebrity couples too.

This couple has kept their relationship hush-hush, as well as their two babies, but they can't deny the fact that their love blossomed on the set of this drama. The two characters may not get a happy ending, but these two lovebirds seem to be creating their own fairytale romance, which includes their daughter Esmeralda, who happened to share a name with a Disney not-quite-princess.

As Mad Men fans know, the couple's TV relationship ended with heartbreak and electro-shock therapy. Since then, the two have gotten married and secretly had a baby, giving Mendes and Gosling a run for their money when it comes to couples that are able to keep their relationships extremely private.

You saw these two onscreen together in the psychological thriller about a haunted house, but you'll rarely see them together on the red carpet. Weisz told MORE that it's because she wants to "protect" their love. "He's just too famous. It would be a betrayal. You have to protect your marriage," she said, making it clear their love isn't a movie. "The audience goes, and you're in your own life." So, don't expect Weisz to spill any real life details of the actor who plays Bond, James Bond, any time soon.

These two met on the set of a certain Nicholas Sparks movie, but their real life love affair definitely has some things in common with Sparks' novels. First, they were nearly torn apart by their differences; a clear sign that you may be living in a Nicholas Sparks movie. And while we don't know if they ever wrote each other any letters, they did continue to correspond on social media to keep their bond going. Now, they're reportedly planning their wedding, which means we may soon have the happy ending that The Last Song couldn't give us at the time.

Jon Snow knows nothing, Ygritte made that very clear, but Harrington was smart enough to realize that Leslie was worth getting to know off the GOT set.

The two met during the making of this Lars von Trier movie that deals with sexuality in its many forms. The two never shared the screen in the two-part four-hour film, but managed to make it work offscreen. The couple's romance has been as controversial as the movie they met on. (Goth and LaBeouf had a very public fight in 2014.) But love may win out since the two are reportedly engaged... again.

This American drama is a tearjerker, but you'll be all smiles once you see Danes and Dancy dance around together. It's the one scene in this movie that will leave you crying tears of joy (and maybe jealousy) instead of sadness. It's almost as cute as this couple's love story, which began with a little Boggle and Scrabble. What's a seven-letter word for best couple ever?

Like Aniston's character in this comedy, she just couldn't deny Theoroux's appeal. His rendition of the Spin Doctors' "Two Princes" is enough to leave anyone smitten, so I totally get it.

These two secretly began dating in 2006, married two years later, and 10 years after they started their courtship are still making us laugh and cringe with their raunchy FX series that only gets better with time. I'll assume the same can be said of their love.

Blink and you may miss Portman's now husband, Millepied, in the above scene from this dance thriller. but, since he was also a choreographer for the film, the two had more time to get to know each other offscreen than off. You know what they say: the couple that dances together stays together.

It was love at first bite for these two, who got steamy (and bloody) on set together and also found they took a liking to one another off set too. Puns aside, Moyer told Andy Cohen on Watch What Happens Live! in 2015 that the two actually did fall in love at first sight, during the auditions for the HBO show. "We met screen testing for the show," he said. "We were both single at the time, and there was just this kind of spark." It was a spark that later turned into a flame; the parents of twins have been married since 2010.

This may be the only reason why this sci-fi movie based on the 1992 novel of the same name is worth remembering. I'm sure the couple thinks the same thing every time they look at their baby girl, Briar Rose, born in 2014.

The ABC show about fairytale characters ended up leading to a happy ending for Goodwin and Dallas' love life. Definitely a case of life reflecting art. Snow White and Prince Charming, forever.

Now, go back and watch all of these movies and TV shows to see if you can pinpoint the moment when they fell in love.

More like this
Selena + Chef Season 4 Was Filmed At Hannah Montana's Old Malibu House
By Jake Viswanath
Here’s Everything Coming To & Leaving Netflix In August
By Jake Viswanath
What’s New On Netflix: 'Never Have I Ever' & 'Indian Matchmaking' Return
By Arya Roshanian
What’s New On Netflix: 'Bridget Jones’s Diary' & 'Monster-in-Law'
By Arya Roshanian
Get Even More From Bustle — Sign Up For The Newsletter